Share All sharing options for: Why Phil Hughes' Bad Back Might Be Good and Curtis Granderson Is Better

Phil Hughes was originally scheduled to pitch Monday's make-up game against the Twins, but is being pushed back into the subsequent Rays series because of some back spasms he experienced in the weight room on Saturday. Any injury concern this close to the playoffs is a bad thing, but if Hughes' back doesn't become a lingering concern, the Yankees will benefit from the change in rotation.

Hughes has pitched well in his last two starts (combined: 12 IP, 10 H, 3 R, 4 B, 8 K, 2.25 ERA), both of them quality starts in Yankee wins, but both of those starts came against last-place teams in the Orioles and Mariners. The Twins have the worst record in baseball this month and the Mariners are the only American League team to have scored fewer runs than Minnesota this season. If the Yankees want to know what they have in Hughes heading into the postseason, they need to see him pitch against a better team, and the Rays, who are hot and making a legitimate run at unseating the Red Sox for the Wild Card, fit the bill perfectly. 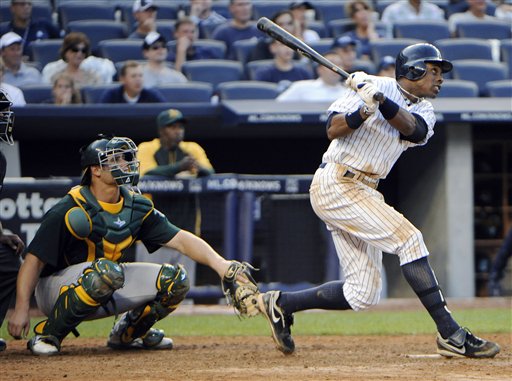 Curtis Granderson's 2011 season has fulfilled every hope the Yankees and their fans had for him when he was acquired from the Tigers in Decemeber 2009. (AP)P)

Curtis Granderson hit his 40th home run on Saturday, a two-run shot to dead center that proved to be the game winner. When the Yankees traded for Granderson coming off a season in which he hit a career high 30 home runs in 2009, many posited that taking Granderson's lefty power bat out of cavernous Comerica Park and putting it in the shiny new launching pad that was the new Yankee Stadium could result in a 40-home-run season. I added my voice to that chorus, writing the following in my analysis of the three-way deal for Bronx Banter:

Comerica Park, while it is a triples-hitter’s paradise, is hell on left-handed hitters, especially left-handed power hitters. It’s next to impossible to hit a triple in the new Yankee Stadium, but it is already well-known as a home-run hitting paradise for hitters of both hands, which means that Granderson is likely to get a significant boost from his home park, particularly as his triples already started to turn into home runs this year. Just a .261/.334/.451 career hitter at Comerica, Granderson has hit .284/.353/.516 on the road, and 20 of his 30 home runs in 2009 came outside of Detroit. As a Yankee, he could well reach 40 home runs in a season, a total which has been reached by a Yankee center fielder just five times, four by Mickey Mantle and one by Joe DiMaggio.

Not bad. Granderson has hit 17 triples in his two seasons as a Yankee, but just six have come at home. Meanwhile, after missing a month with a groin strain last year, he has done more or less what I suggested above this season, doubling his road total of 20 home runs (Saturday's was number 20) with 20 more at home to produce a 40-home run season.

If his new ballpark gives him the boost many expect, and Yankee hitting coach Kevin Long can finally solve his struggles with lefties, Granderson will become an absolute bargain and a true star. Of course, the latter is a huge "if."

I've said it before, but both Long and Granderson deserve tremendous credit for making that "if" a reality. What will be most interesting to see is if Granderson can continue to thrive against lefties in 2012. Given that he's been consistently productive against lefties for more than a year dating back to last season, it seems likely that he can.