Don't look now, but with less than two weeks left in the season, David Robertson's ERA+ is 379*, which is the sixth-best single season mark by a pitcher with 60 or more innings pitched in the history of the major leagues. Here's the leader list:

Eckersley's 1990 season, his third full season as the A's closer, was just insane. In those 73 1/3 innings he allowed five earned runs (though also four unearned), three of them on the two home runs he allowed, walked just four, one intentionally, and posted a 0.61 WHIP and 18.25 K/BB. Amazingly, he had a better WHIP and K/BB the year before (when he wasn't called upon to intentionally pass anyone), albeit in less than 60 innings.

Looking over the rest of the list, though this level of run prevention is fluky by definition, there aren't any real fluke pitchers here. Scoff at Jose Mesa if you want, but he spent 19 years in the majors and saved 321 games. Smoltz is going to the Hall of Fame. Eckersley is already there. Papelbon has been one of the best closers in baseball for the last six years and has a career ERA+ of 202 (Mariano Rivera is the current career leader at 205). 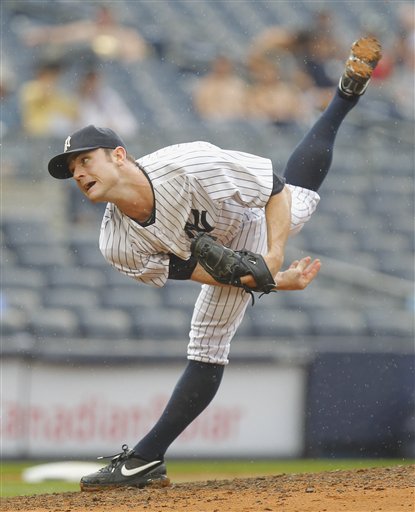 That just leaves Hammond, the lone lefty on the list, whose dominant 2002 campaign setting up Smoltz came at the age of 36 after a three-year absence from the major leagues following shoulder surgery and a brief retirement. Hammond signed with the Yankees as a free agent after his shocking 2002 season, and while he's not remembered terribly fondly by the Yankee faithful, he did post a 2.86 ERA and 4.09 K/BB for the Bombers in 2003, only to fall out of favor with Joe Torre after surrendering a pair of home runs that cost the Yankees a game against the Red Sox in late July. Traded to the A's that December, he had another strong season at age 38 and was a league average arm for the Padres at age 39 before age finally caught up to him in Cincinnati in 2006, his final season. Altogether, the comeback portion of Hammond's career saw him post a 2.93 ERA (147 ERA+) over five season, which includes that decline with the Padres and Reds, making him far from a fluke.

That all bodes well for Robertson, who isn't likely to have another season with an ERA+ above 300 (only Rivera has done that twice in seasons with a minimum of 50 innings pitched), but should remain an elite reliever for years to come and will remain under team control through 2014.

*prior to Friday night's game, in which he threw another scoreless inning, after working into and out of a bases-loaded jam, of course.