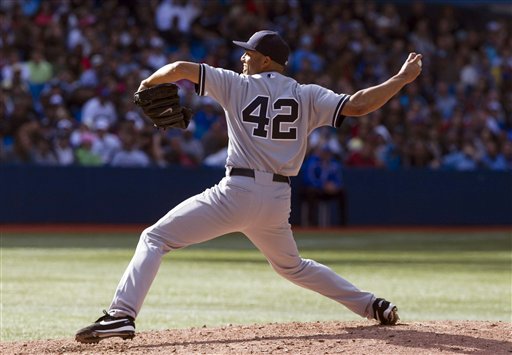 Mariano Rivera in the process of picking up his record-tying 601st save at the Rogers Centre on Saturday. (AP)

There has been no shortage of articles praising Mariano Rivera in the past week, all well deserved, and many, particularly Steve's piece in this space earlier this week, well worth your time. However, with Rivera tying Trevor Hoffman's all-time saves record on Saturday afternoon, the occasion calls for still more. Allow me to refer you to my SI.com piece from Tuesday on Rivera's value relative to the rest of history's relief pitchers, a piece that builds off another that I published here back in January.

Both pieces include the following chart of seven nine-year slices of Rivera's career, which illustrates what just might be the most remarkable thing about Rivera: the fact that he has pitched consistently and almost unwaveringly at a peak level for 16 seasons and has shown no sign of decline even at age 41.

The SI.com piece goes on to say that Rivera has been roughly one and a half times as valuable as the next best relief pitchers in major league history, whom I identified in this January piece on Hoffman's retirement as a tightly knit trio comprised of Hoffman, Goose Gossage, and Hoyt Wilhelm:

. . . according to [Baseball Reference's Wins Above Replacement], a cumulative stat, Rivera has been almost as valuable in 1,206 career innings as Dennis Eckersley was in 3,285 2/3 career frames (55.8 wins above replacement to 58.7), and exactly as valuable as Sutter (25.0) and Hoffman (30.8), two other Hall of Fame closers (one already in, one a shoo-in), combined. . . . Hoffman, in my estimation, was the fourth-best closer all-time and very close to the second-best man, Gossage, and you have to add Sutter's entire career value to Hoffman to get a closer as valuable as Rivera.

Then there's the postseason. That's right, Rivera dominates his field that completely without even factoring in the 139 2/3 innings of a 0.71 ERA that he has contributed in the most important games of his career. That's the equivalent of two more seasons of some of the best pitching of his career against some of the stiffest competition. In 94 postseason appearances, 58 of which have lasted more than one inning, Rivera has posted a 0.77 WHIP, a 5.19 K/BB, and allowed just two home runs (and, considering the milestone that prompted this piece, saved 42 additional games). Included in those 139 2/3 frames are a postseason record 34 1/3 consecutive innings compiled from 1998 to 2000, three seasons which ended with Rivera recording the final out of a Yankee championship.

Given all of that, it's almost ironic that we're celebrating Rivera inching past Hoffman's career saves record, as that's one of the very few measures of his talents as a reliever in which he doesn't lap the field. By most other standards, he's been roughly 1.5 times as valuable as his closest competitors. For example, toss out the 1976 season that Gossage spent as a starter for the White Sox and his career bWAR total comes to 36.8 wins above replacement. Rivera's, minus his 1995 season, is 55.7, 51 percent higher than Gossage's. Then again, the fourth-highest career saves total is John Franco's 424. One and a half times 424 is 636, a total well within Rivera's reach by the end of next season.

It's very rare that an athlete so clearly and unarguably dominates his field. Rivera isn't the greatest baseball player of all time, nor the greatest pitcher, so comparing him to Wayne Gretzky or Michael Jordan is overreaching, but he has been far and away the greatest relief pitcher in the game's history, which to my mind makes him something like baseball's Jerry Rice, another athlete who played at a high level into his forties (he made the Pro Bowl as a Raider at the age of 40). Rice retired seven years ago from a sport whose records have far less permanence, yet he still has 44 percent more career receiving yards than the second man on the all-time list. That's an imperfect comparison, as well, but then there is no perfect comparison to make to Rivera. That's the whole point. He's a truly unique phenomenon.