Share All sharing options for: Thumbs... Up... For Rodriguez? 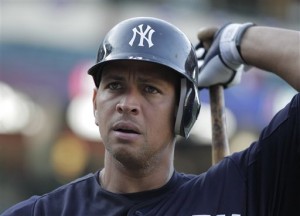 Alex Rodriguez's injured left thumb is one of the Yankees' bigger questions as the postseason approaches. (AP)

Via LoHud's Chad Jennings, the word on the street is that after sitting for the past five games, Alex Rodriguez will test his sprained left thumb in batting practice before Friday night's game in Toronto, and join the lineup if all goes well. Rodriguez acknowledges that his thumb won't be fully healed before the end of the season, which could cost him some power, but but both he and the Yankees sound eager to check in on his current level of ability.

It's been a trying season for the 36-year-old third baseman, who has been limited to playing 90 of the Yankees' 148 games, including just 10 of the past 62 since July 7, when he went on the disabled list to undergo surgery to repair a torn right meniscus. That cost him 38 games, and upon returning, he sprained the thumb in his first game back; since then it's been touch and go. He's been limited to a .194/.370/.389 showing with two homers in 46 plate appearances when he's been able to play, though aside from some bookending 0-fers, he enjoyed a brief 7-for-25 run (.280/.438/.560) with three extra-base hits. Still, with just 15 homers and 56 RBI, he is assured of seeing his record 13-year streak of reaching the familiar 30-homer and 100-RBI plateaus come to an end.

The question is whether he can return to being a threat. As the New York Post's George King, points out, Mark Teixeira struggled with a thumb injury late last year, hitting just .220 with three homers over his final 29 regular season games. "It completely zapped me of my power,," he sad. "Especially if you are a power hitter and you hurt your hand it's no fun."

The Yankees are now up four and a half games on the Red Sox, who with a 3-11 September record are themselves just three games ahead of the Rays for the Wild Card spot. Given that cushion, the bigger question is why the team doesn't give Rodriguez even more time to heal, as there's no urgency for him to return other than to potentially quell — or on the other hand, further — the anxiety about a condition that won't fully heal. If Rodriguez were to sit for another series or another week, he would still have five or seven or 10 games to recover his timing before the postseason start. It's not as though he's got individual milestones at stake, or that he has to prove anything to the yutzes who think he's gone soft. As we've reminded several times in the recent past, and as the Yanks to a man will acknowledge, it's all about being ready for October.