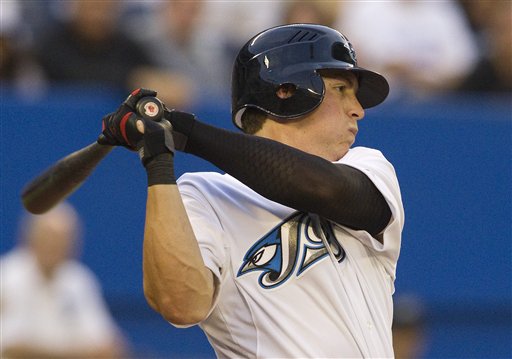 Colby Rasmus, expected to be activated for this series, is one of several compelling young players the Blue Jays have added in the last couple of months. (AP)

As I wrote two weeks ago when the Blue Jays visited the Bronx, the Jays may not be contenders this year, but they have a lot of compelling new faces worth seeing this September. The Yankees got a look at beefy, 21-year-old third base stud Brett Lawrie two weeks ago. He's now hitting .303/.378/.629 on his young big league career (149 PA) and made some spectacular plays in the field against the Bombers. He's questionable for this series after banging up his left knee in a home-plate collision with Jason Varitek on Wednesday, but should be a thorn in the Yankees' side for years to come.

The Yankees did not see Colby Rasmus two weeks ago as he was on the DL with a semi-mysterious wrist injury, but he's expected to be activated and in the lineup tonight. Rasmus, once again, was the Cardinals' first-round pick in 2005 and the number-three prospect in all of baseball entering the 2009 season, according to Baseball America. He had a strong showing as a 23-year-old sophomore last year, but butted heads with Cards skipper Tony La Russa and struggled to follow up on that performance this year, leading to his banishment from St. Louis. His career could go any number of directions from here, but for now it's enough to say that Blue Jays gave up very little for an extremely talented, team-controlled 24-year-old center fielder with All-Star potential.

A few steps down from those two is Adam Loewen, who was once a top left-handed starting pitching prospect with the Orioles who made four strong starts against the Yankees as a rookie in 2006. A fractured elbow radically altered his career, however, and now he is a 27-year-old outfielder who hit .306/.377/.508 for Triple-A Las Vegas this year (note: a very nice place to hit) and has gone 5-for-14 with a home run in five games for the Jays this September, his first major league exposure as a full-time hitter. Go ahead and draw comparisons to Rick Ankiel, many of them fit, including the 6-foot-6 Loewen having potential to stick in the majors as a power-hitting fourth outfielder.

Speaking of pitching careers derailed by injury. The Jays will open this three-game weekend set with Dustin McGowan on the mound, making just his second major league start after missing three years due to a pair of shoulder surgeries. I go into more detail on McGowan below as well as on Henderson Alvarez, the compelling 21-year-old groundballer who will face off against Bartolo Colon on Saturday.

As for the Blue Jays as a whole, they were swept by the Yankees two weeks ago in the Bronx, but they have since taken four of six from the collapsing Red Sox, going 6-3 overall in the interim and would be in second place in the AL Central.

McGowan's relief outing on September 6 was his first major league appearance in more than three years, the last coming on June 8, 2008. McGowan was once part of the Blue Jay's young pitching core back when Roy Halladay, A.J. Burnett, Shaun Marcum, McGowan, and Jesse Litsch combined to form one of the best rotations in baseball, but free agency led to the departures of the first two and injuries sidetracked the careers of the latter three, with Marcum being flipped for Brett Lawrie this past off-season, a trade that appears likely to be a win for both teams, and Litsch spending this season bouncing between the majors, minors, rotation, and bullpen.

McGowan, who lost those three years to a severely damaged rotator cuff and labrum in his pitching shoulder which required two surgeries, with repair of the meniscus in his right knee thrown in along the way as part of the combo package, made a dozen minor league rehab starts earlier this year before returning to the majors when rosters expanded. However, none of his five Triple-A starts lasted as many as five innings and in his two appearances since rejoining the Jays, one in relief, one a start this past Sunday, he has walked eight and allowed seven runs in seven innings of work. His relief appearance lasted longer than his start (four innings to three), though he threw roughly 75 pitches in each. Still, McGowan, who is now 29, doesn't look completely shot. His fastball is still sitting around 94 miles per hour, his changeup is still missing bats, and he's mixing in sliders and curves that can keep batters off balance, and in his 19 2/3 rehab innings, he had solid peripherals (8.2 K/9, 3.2 BB/9, 2.57 K/BB). One could float any number of theories as to why McGowan's control has deserted him in the majors, but after three years off, it seems unfair to draw any conclusions about his viability going forward after so few innings of work.

Note: McGowan was originally scheduled to start on Sunday, but was moved up to spot for lefty Brett Cecil, who cut on his left index finger and was scratched.

Colon has actually been very good in two of his last three starts, holding the Orioles to two runs over 7 2/3 innings on August 28 and the Angels to one unearned run over seven frames his last time out. He walked just one man between those two starts, threw right around 100 pitches in each, and didn't allow a home run in either, though he also struck out just nine men in those 14 2/3 innings. The start in between saw him strike out seven Jays in 6 1/3 frames, but allow four runs, two of them on solo homers, and use up 110 pitches.

Alvarez is a 21-year-old rookie Venezuelan righty making his eighth major league start. He strikes me as something like Tonronto's answer to D.J. Mitchell, an unimposing righty groundballer who has moved quickly through the system, but has a low ceiling.  Alvarez spent most of the 2011 season in Double-A, pitched well, and made the leap straight to the majors in August with more success than the far more highly regarded Kyle Drabek, who also skipped Triple-A to make the Opening Day rotation only to quickly be farmed back out. Alvarez has outstanding control, a splendid groundball rate, and strikes out enough men to make the total package surprisingly compelling. He can get his fastball into the mid-90s, has a good mid-80s changeup, and two turns ago he held the Red Sox scoreless for six innings. That came after eight scoreless innings against the Orioles in his previous turn. Four of his last five starts have been quality and his other three have missed by no more than an inning or a run, never both (and remember, two of those non-quality starts were his first two major league games). The Blue Jays might have a nice mid-rotation starter on their hands here, if not more.

Garcia didn't allow a home run in ten starts before hitting the disabled list with a cut on his pitching hand. Since returning, he has allowed five home runs in 13 2/3 innings across three starts, including four taters in his last two starts in just 7 2/3 innings. Those last two starts were both disasters (he allowed 12 runs in those 7 2/3 innings), though the Yankees scored a combined 17 runs and won both anyway, and there's good reason to be worried about Garcia given that his fly ball tendencies were a concern coming into the season. This game will be a good test, as the Rogers Center is one of the premier launching pads in the majors and the Blue Jays are a home-run hitting team. Garcia kept the Jays in the yard in his only other start in Toronto this year, but also gave up six runs (five earned) in five innings in that game with five of the seven hits he allowed being doubles.