Share All sharing options for: 600 and the Road Not Taken 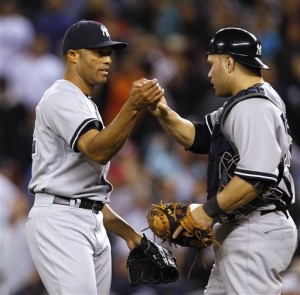 Mariano Rivera's 600th save didn't get away, but long ago, he almost did. (AP)

The most famous unconsummated trade in baseball history is the one that would have sent Joe DiMaggio to the Red Sox for Ted Williams. As legend goes, Yankees owner Dan Topping and Sox owner Tom Yawkey agreed to the deal over drinks at Toots Shors in April 1947 but decided to sleep on it; when a sobered Yawkey asked for a rookie Yogi Berra as a throw-in the next day, the deal was off.

As a straight-up swap, that unmade trade, two larger-than-life Hall of Famers trading places mid-career, is delicious to contemplate. The Yankee Clipper would go on to win AL MVP honors at age 32 in 1947 while leading the team to its first world championship in four years, but he had just four seasons left to play, three of them good but only one truly great. Williams would win the Triple Crown in 1947 while leading the AL in all three slash stats as well, and would go on to play for another 13 seasons (two of them spent mostly while serving in Korea); he hit .340/.480/.627 with 356 homers over that 1947-1960 period.

The Splendid Splinter couldn't get the Red Sox over the hump, though. The Yankees would win 10 pennants and seven World Series from the point of that unmade trade, while the Sox wouldn't get back to the Series during Williams' remaining career after winning the AL pennant in 1946. If you were a Yankee fan, you wouldn't go back and make that trade despite the individual advantage that the Splinter held over the Clipper going forward.

I thought of that last night when Baseball Prospectus intern Sam Tydings tweeted a link to this November 17, 1997 Seattle Times article about a potential Mariano Rivera-for-Randy Johnson trade that was rejected by the Mariners. The 27-year-old Mo was just coming off his first season as the Yankees' closer and had notched 43 saves, but he was only about six weeks removed from the blown save in the potential Division Series clincher against the Indians. Johnson was coming off his first 20-win season, but he was no spring chicken; at 33, he had already racked up four top-three Cy Young finishes in the previous five years (including a win in 1995) and had just helped the Mariners to their second playoff berth in three years. He was getting too expensive for the Mariners' tastes and headed towards free agency; the M's would deal him to the Astros the following summer in a swap that brought back three players including Freddy Garcia. Amazingly, he still had a whole lot of greatness left; after 1997, he would go on to win another 178 games and four Cy Youngs while leading his leagues in ERA three times and in strikeouts five times, topping 300 K's five times as well.

Here's what the article has to say about what might have been:

Not even the New York Yankees' offer of reliever Mariano Rivera, rated one of the American League's top closers, could entice the Mariners to give up Randy Johnson.

Three clubs have made trade offers, and outside of the Rivera offer, the return for Johnson so far has been paltry. Asked about the Yankees' bid, Seattle General Manager Woody Woodward did not confirm it directly but said: "We need a starting pitcher back in any deal for Randy. If we don't get one, if we don't get what we are looking for, then we are fully prepared to go into the season with Randy on our team."

A Mariner official also said there are concerns about Rivera's arm. There were suspicions the 27-year-old right-hander had shoulder trouble late in the season. Rivera had 43 saves, appeared in 66 games and was 6-4 with a 1.88 earned-run average.

Seattle was looking for 1996 AL Cy Young winner Pat Hentgen from Toronto in a deal for Johnson. But the Blue Jays offered pitcher Juan Guzman and outfielder Shawn Green, a Toronto source said. The Mariners reportedly sought Jose Cruz Jr., the rookie they traded in July for relievers Paul Spoljaric and Mike Timlin.

While the Yankees dangled Rivera, they might have refused to consider a Seattle request for left-handed starter Andy Pettitte.

Johnson would of course win a World Series ring at Rivera's expense with the Diamondbacks in 2001, but Mo would be the last man standing four other times, starting in 1998. The Yankees might have netted more individual value from a WARP or WAR standpoint had they traded for the Big Unit and thrown enough money at him to overcome his reticence about New York; the Johnson they wound up with in 2005-2006 was a far diminished pitcher, his rage against the dying of the light the driver of his discomfort. But those world championships are no foregone conclusion without Cool Hand Mo — arguably the greatest postseason performer of all-time — on the mound, to say nothing of what Rivera the man has brought to the Yankee organization beyond the playing field.

(Here I should add that the unmade Mariners trade wasn't the only time the Yankees considered dealing a young Rivera. At River Avenue Blues, Ben Kabak recounts two 1995 trade balloons that nearly sent Rivera away for David Wells, one in midseason when he was still a Tiger, the other later in the year when he was a Red, shortly before he was traded to the Orioles. As the story goes, the latter deal would have also included Jorge Posada.)

Rivera's 600th save or his impending passage of all-time leader Trevor Hoffman at 601 doesn't change anything about how we'll view his fantastic career, but he's 41 years old now, much closer to the end of his baseball journey than the beginning, and there's no harm in stopping to smell the roses while they're still in bloom. So let us once more congratulate Mariano Rivera on his milestone, and savor what he has meant not only to the Yankees, but to baseball.