On Monday at Baseball Prospectus, I took a look at the AL Cy Young race, and specifically whether Tigers ace Justin Verlander should be considered as much of a lock as he currently appears to be in terms of the heat generated by the mainstream media. After all, aside from his 22 wins — tied for the highest total since 2003, the kind of thing most voters notice — his traditional and advanced stats aren't light years beyond two other candidates, namely CC Sabathia and Jered Weaver. Consider:

The stat soup key: RS is each pitcher's level of offensive run support in runs per game; HR, UBB and SO are home run, unintetional walk and strikeout rates (per nine innings); FRA is BP's new version of Fair Run Average, which controls for sequencing (the order in which events happen) and defensive support; FIP is Fielding Indepenent Pitching, based upon a pitcher's defense-independent outcomes (strikeouts, walks, hit-by-pitches and homers), which correlate strongly from year to year, while ignoring defense-dependent outcomes, which don't correlate well from year to year; and WARP is Win Above Replacement Player, BP's total value metric. 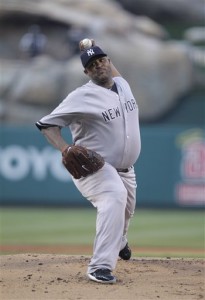 As strong a year as CC Sabathia is having, he's not the Cy Young frontrunner. (AP)

Verlander owns a slight edge in innings and strikeouts, but Sabathia and Weaver are stingier with the walks and strikeouts; it's the big man who has the edge in FIP. Verlander's the beneficiary of a .236 BABIP, the league's second-lowest figure among ERA qualifiers, while Weaver's at .255; Sabathia, on the other hand, is at an uncharacteristically high .317. Once you control for sequencing and defensive support via FRA, Weaver has the edge, though Verlander's advantage in innings still gives him the overall edge in WARP. So at this point, we can say that Verlander has been the slightly more valuable pitcher, though Sabathia has the slight edge in terms of being a better bet to do it again based upon his skills.

Awards voting tends to be far more outcome-based than skills-based; traditional stats such as wins and RBI tend to carry the day, though the AL Cy Young voters have shown a laudable evolution by voting for Zack Greinke (16 wins) and Felix Hernandez (13 wins) over the past two years thanks to consideration of their peripherals, levels of offensive support, and more advanced metrics.

One thing not accounted for in the above measures, and the thrust of my article, is the differing level of competition each pitcher has faced:

Here at BP, we do track that sort of thing, of course. Sabathia pitches in the rough-and-tumble AL East, a division where three other teams besides the Yankees own positive run differentials (at least through Saturday). Verlander, by contrast, has the luxury of pitching in the AL Central, where none of his opponents have a positive run differential, and two of them, the Twins and White Sox, rank among the league's most inept offenses. Weaver's division, the AL West, features a pair of low-wattage offenses in Oakland and Seattle.

The spread in Quality of Opposing Batter Faced isn't very big; among the 104 pitchers with at least 140 innings—ERA qualifiers, basically, with an allowance for those a single start away from joining the ranks—the spread is 40 points of OPS from the toughest slate (David Price, .267/.335/.433) to the easiest (C.J. Wilson, .260/.323/.406), and the standard deviation from the median is just seven points of OPS. The cumulative line of the hitters Sabathia has faced is .265/.330/.425, while for Weaver it's .264/.328/.414, and for Verlander it's .262/.326/.412. Those two lines are 15 and 17 points of OPS lower than that of Sabathia, respectively, more than double the standard deviation, enough to take notice. However, if we turn to what those pitchers have actually yielded against their respective slates of hitters, the difference comes out in Verlander's favor, and not by a little. The Tiger holds 60-point advantages over the Yankee in both batting average and on-base percentage allowed, and a 41-point edge in slugging percentage, while against the Angel, he's got advantages of 20, 20 and 12 points in the slash stats:

That last column I'm calling Opponent Quality Plus. The world probably didn't need another pitching metric, but as the Rolling Stones famously sang, "You can't always not get what you don't want," and here I come bearing gifts. Opponent Quality Plus is an OPS+-type figure in which I've used each pitcher's opposing hitter line as the "league average" in the typical OPS+ formula: 100 * (OBP/lgOBP + SLG/lgSLG - 1). I've divided by the Pitcher Park Factor (also in that report) to make a slight additional adjustment. A 100 would mean that a pitcher performed essentially as expected given the quality of opponent and park, while a 90 would be 10 percent better than average (for a pitcher), and 110 percent would be 10 percent worse.

In this case, Verlander is 50 percent better than average, tops among all ERA qualifiers in both leagues. Weaver ranks 10th, Sabathia a distant 20th. While this isn't the be-all and end-all of pitching stats,and it doesn't correct for luck/randomness involved in BABIP, it does make rather clear that Verlander has separated himself from Weaver and Sabathia enough to merit the Cy Young.

None of which takes away from the fact that Sabathia is having a fine season. His ERA, strikeout, walk and homer rates are his best as a Yankee. He has reached the 200-strikeout plateau for the first time since 2008, and his 3.9 K/BB rate is an extra strikeout beyond his other two seasons in pinstripes. Only a big jump in BABIP, from seasons of .278 and .283 to the aforementioned .317, is preventing his season from looking even stronger.

In another article at BP, I examined the question marks which still exist in among the playoff rotations of the four likely AL participants; while the Yankees have questions as to how they will line their starters up behind Sabathia, the Red Sox have more dire questions as to whether Josh Beckett and Clay Buchholz will be healed enough from their respective injuries to participate, whether the struggling John Lackey will be needed, or whether old friend Alfredo Aceves should be stretched out. Here's what I wrote about the Yanks (keep in mind the stats are now one rotation turn out of date):

Sure Thing: CC Sabathia (2.97 ERA, 2.79 FIP) is in the midst of another outstanding season... His ability to pitch on three days' rest is a critical advantage that the Yankees have already used to win one world championship; in all, he's made three post-season turns on short rest, two of them good, one (2008 with the Brewers) bad, the latter following three straight turns on short rest to carry Milwaukee to the playoffs for the first time since 1982.

In the Mix: With Andy Pettitte having taken his Game Two prowess and gone home, the question is less who the Yankees throw behind the big man than in what order. The Yankees are unbeaten in Ivan Nova's last 12 turns, but with a 3.89 ERA and a 4.03 FIP, the 24-year-old righty is hardly as invincible as that stat makes him appear; indeed, he's been blessed with the league's best run support (6.6 per game) en route to a gaudy 15-4 won-loss record. What is true is that the development of Nova's slider has been a big factor in his emergence; during that span he's whiffed 6.4 per nine with a 2.7 strikeout-to-walk ratio, compared to 4.4 strikeouts and a 1.1 ratio prior. Bartolo Colon (3.72 ERA, 3.82 FIP) and Freddy Garcia (3.50 ERA, 3.87 FIP) have written a pair of unlikely comeback tales, but there's concern as to how much either will have in the tank come October. The former hasn't thrown this many innings since 2005, and has shown signs of wear, surrendering a 4.46 ERA and 1.3 homers per nine while making four quality starts in 12 since his June stint on the disabled list, compared to a 3.10 ERA and a homer per nine in 13 appearances and 10 starts (seven quality) prior. The latter was riding a 10-start streak without having allowed a homer — nine of them in which he'd allowed three runs or fewer — when a cut finger sent him to the disabled list; since then, he's served up three homers in two starts, including two on Monday, when he was tagged for a season-high seven runs in 2 2/3 innings.

Longshots: Barring injury or excessive fatigue in one of the aforementioned trio, the likelihood of either Phil Hughes (6.75 ERA, 4.70 FIP) or A.J. Burnett (5.25 ERA, 4.85 FIP) making a post-season turn is slim, even given their previous experience; both have struggled with mechanics, lost velocity, and an inability to keep the ball in the park, creating no end of controversy in the Bronx about which one should be exiled to the bullpen. At last, they'll both get the honor.

At the end of the article I draw upon an old Nate Silver piece and compare the four rotations (the Tigers and Rangers being the other two) by weighting each starter's FIP in a distribution along the lines of a typical 1-2-3-4 starter postseason workload; number ones take up 31 percent of the load, twos 28 percent, threes 23 percent, and fours 18 percent. Depending upon how you order them, the Yankees come in with either the best or second-best rotation FIP by a mere whisker; a Sabathia/Nova/Garcia/Colon alignment, for example, would be at 3.57, and reordering those three behind CC only changes things by a few hundredths of a run. If the current trends regarding Garcia and Hughes continue — the former's most recent turn was lousy, the latter's solid — that might change the makeup of the quartet — that only adds about one-tenth of a run.

Admittedly, it's a back-of-the-envelope calculation, but it should be of some comfort as the team looks towards the playoffs. It will take some good fortune with regards to health as well as defensive support, but their set of starters is as skilled as any of the AL clubs who will still be playing in October.