Share All sharing options for: Phil Hughes on Earth-Like Planets 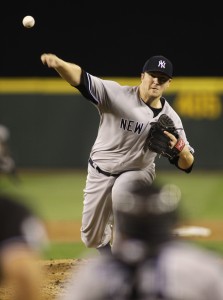 Far more than hitters, pitchers are a moving target. Last night, just before the Yankees and Mariners took the field, I was reading a chapter written by statistician Dan Turkenkopf for a new book I’m editing. Dan made the point that in certain aspects of evaluating players, by the time you have enough information to be sure of what you’re seeing, the player has changed and the information is no longer relevant.

It’s a bit like observing extra-solar planets via telescope. The images you’re getting are decades out of date by the time you see them. I was thinking about this yesterday when the news came out of a potentially Earth-like planet discovered a short 36 light-years away. It was mentioned that a new telescope being built in Europe will be "technically capable of finding life around the nearest stars." Say it did find that life and you wanted to send a signal. Even if you send it at the speed of light, your "Hello!" would take 36 years to reach its target, and the "Hello!" back (or the evil alien death ray) would take another 36 years to come back—it’s a 72-year process. As Han Solo said, "Boring conversation anyway."

Last night Phil Hughes won a game against one of the worst offenses in the business. The Mariners, just one off the American League lead in batter strikeouts, whiffed three times in six innings while walking three times, but scored only once. Hughes’ ERA is a zaftig 6.00, but in terms of trying to anticipate the short- and long-term future, what is troubling is his 5.6 strikeouts per nine innings, a roughly two-strikeout discount on last year’s performance. As omens go, this is like noticing that one corner of your banana plantation has Panama disease.

Since Hughes’ does not appear to be structural, that leaves mechanical, a problem no-less vexing despite its inability to be solved by scalpel-work. A problem that can’t be repaired by cutting has to be solved by insight, and that’s the harder trick. Quite often a player or coach cannot see what aspect of the player’s approach that used to work must be junked and replaced. Even then, there is no guarantee that a mechanical change will result in Hughes regaining the 1.5 mph that has gone missing from his fastball.

What should our expectations be? Hughes established himself as one of the best prospects in baseball after he was drafted in 2004’s first round, striking out 10.1 batters per nine innings as he climbed the ladder, walking just 2.2 and otherwise being very difficult to hit. Yet, that was a few years ago now, and also a few injuries ago. Hughes is just 25, hardly old for a pitcher, and may yet make adjustments that will lead to a long and productive career as a starting pitcher, but just maybe when we let what he did in the minor leagues influence how we think of Hughes today, we are like telescopes, reacting to pictures of other planets: what you are seeing happened so long ago that it’s gone, irrelevant, moot.

Action items for now: there aren’t any, except to keep trying to find the obscure hook that will restore Hughes to his old form. Action items for after it’s all over: questioning if Hughes is still a future ace, if he still should be as untouchable as he used to be.