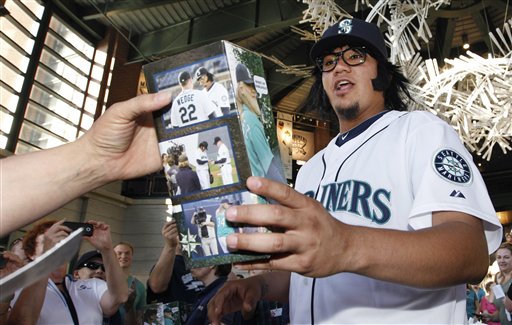 Things are so bad in Seattle, the team's official commercials show Felix Hernandez disguising himself so he can pitch more often. Above, "Larry Bernandez" hands out bobbleheads of himself to fans. Seriously. (AP)

The M's have gone 18-37 (.327) in the second half and have scored an average of just 3.6 runs per game over that span while allowing an average of 5.1 runs per game. They have introduced some fresh young faces, which at least make them more interesting to watch, but with the exception of second baseman Dustin Ackley, the second overall pick in the 2009 draft, those youngsters haven't necessarily made them any better.

Despite all that, the Yankees are just 3-3 against the M's this year. Then again, they're 3-1 against the M's in games not started by Felix Hernandez, who will face Phil Hughes tonight.

Hughes followed a pair of disaster outings with a modest quality start against the Orioles in his last turn (6 IP, 2 R) and has struck out 14 men in 14 1/3 innings against just three walks over those last three turns combined. He also turned in a quality start in his only outing against the Mariners this season back on July 27 (also 6 IP, 2 R). Doing well against the O's and M's won't convince anyone that Hughes is playoff-ready, particularly when the similarly punchless A's have roughed him up twice since his return from the disabled list, but the simple fact that Hughes continues to stay in the rotation proves that he's at least keeping the Yankees' minds open.

King Felix is inducing fewer groundballs and has been less hit-lucky than he was a year ago, when he won the AL Cy Young with a record-low 13 wins, but he's otherwise been very little difference between his effectiveness last year and this. Still, the Yankees have had a modicum of success against him this year, scoring four runs against him in Seattle back in May, three of them scoring on home runs by Robinson Cano and Mark Teixeira, and drawing nine walks against as many strikeouts in 14 innings across two starts on the season.

Six-foot-five rookie lefty Charlie Furbush was part of the Mariners return from the Tigers for six-foot-eight righty Doug Fister, and strikes me as a comparable pitcher at least in terms of being a big guy without big velocity who relies on deception and control. Fister is two years older, but he also has far better control and has excelled since switching teams. Furbush, who leans heavily on a 90 mile per hour two-seamer and mid-70s curve, mixing in the odd four-seamer and slider, gives up more than his share of home runs and has struggled since being installed in the Mariners' rotation (the Tigers used him as a long reliever and spot starter). That said, each of his last three starts has been better than the previous one, peaking with a 7 1/3-inning quality start (3 R) in Anaheim in his last turn. That was just his second quality start in seven starts for the Mariners, however.

Burnett has posted a 7.26 ERA in his last dozen starts, not one of which has been quality, a standard (6 IP, 3 ER) some critics consider to lenient to be meaningful. His 7.81 ERA since the All-Star break has been the worst in baseball among pitchers with 50 or more innings pitched over that span.

Fourth on that list of the worst ERAs since the All-Star break is Vargas, with a 6.56 mark. He does have four quality starts in the second half, but six of his other seven starts over that stretch have been disasters (R ≥ IP), as have both of his starts against the Yankees this year (combined 0-2, 12.86 ERA with just seven innings pitched across the two starts).

Nova has gone 14-2 with a 3.50 ERA since April 26 and 7-0 with a 3.61 since returning from the minors in late July with six of his eight starts over that stretch being quality. One of the two exceptions was his last outing in which he lasted just 5 1/3 innings against the Orioles. He only made it through 3 2/3 innings when he last faced the Mariners, but that was back in May and he's only had one disaster start since then.