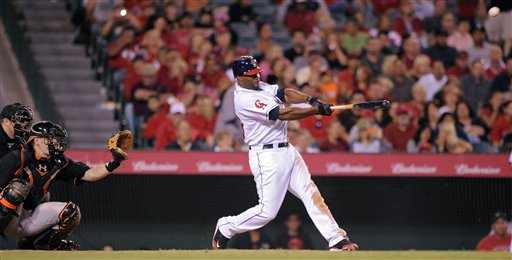 Torii Hunter has helped the Angels boost their run scoring just in time for their pitching to come back to earth. (AP)

There's a chance that the Yankees are going to run into a buzzsaw this weekend. The Yankees are playing in their third city in three days tonight, and their internal clocks are still on east coast time. The Angels, meanwhile, are the last team in the majors with a fighting chance to move into a playoff spot and will throw their top three starters, who are arguably among the top three starters in the league, period, in this three-game set.

Then again, as you'll see below, all three of those starters have come down from earlier highs of late, the Yankees hold a 4-2 advantage in the season series between these two teams, and the Angels are 7-6 over their last four series, three of which came against bad teams (the Mariners twice, the Twins once). So, to abuse the metaphor, the Yankees might run into a buzzsaw, but there's a chance that it's not plugged in and they'll walk away with nothing more than a scratch.

If the Angels do manage to overtake the Rangers in the AL West (they currently trail by 2 1/2 games), this could well be a Division Series preview, as the Angels would surely start Jered Weaver, Dan Haren, and Ervin Santana, in that order unless one or more is needed in their season-ending series against the Rangers (which they likely would be), while Freddy Garcia and Bartolo Colon seem like solid bets to line up behind CC Sabathia in the Yankees' postseason rotation (though not in the order in which they'll pitch in this series).

The big-picture take on the Angels is that their offense has perked up of late led by a rejuvenated Torii Hunter (.355/.417/.548 since the beginning of August) and an unexpected power surge from Peter Bourjos (.309/.356/.577 with seven home runs to Hunter's six over that same span), but their previously dominant rotation has cooled off as follows . . .

Weaver was arguably the best pitcher in baseball through the season's first four months, posting a 1.78 ERA through his first 24 starts, all but two of which were quality, with those two missing only by one run each. Three of his last five starts, however, have been full-on disasters, giving him a 6.67 ERA over that span and inflating his season mark by seven-tenths of a run, effectively handing the AL Cy Young award to Justin Verlander (who probably was going to win it anyway). The first of Weaver's three disasters came on seven day's rest following his suspension for throwing at the Tigers' Alex Avila in late July, a suspension which prevented him from facing the Yankees when they visited the Bronx in early August. The next came when the Angels started him on three-day's rest to try to steal a win against the division-leading Rangers. That was two starts ago, and his last was only marginally better, as he allowed six runs in five innings but also struck out eight and was helped to a win by a ten-run outburst from his offense.

In a dozen starts since returning from his mid-season hamstring injury, Colon has gone 6-6 with a 4.46 ERA and just five quality starts. That's a sub-par performance, though he still seems to have the edge on Phil Hughes and A.J. Burnett for the Yankees' fourth starter spot come October. Colon's biggest problem right now seems to be a soaring fly ball rate and a corresponding spike in home runs (he has allowed two homers in three of his last four starts), which seems at least partially the result of his losing confidence in his two-seam fastball.

Like Weaver, Haren was among the American League's top pitchers for much of the season, but has seen his effectiveness erode over the last month. Haren is at least still churning out quality starts, meeting that standard in four of his last five turns, but over his last six, he has gone 2-2 with a 4.89 ERA. He has struck out eight times as many men as he has walked over that span and owes some of his struggles to bad luck on balls in play (.323 BABIP), but he still doesn't look like the same pitcher he was earlier in the year. The Yankees saw that first hand in early August when he threw 120 pitches against them and still wasn't able to escape the seventh inning, blowing a quality start and ultimately taking a no-decision.

Over his last 14 starts, CC Sabathia has struck out nearly 11 men per nine innings and nearly six times as many men as he has walked (5.77 to be exact). He struck out ten men in each of his last two starts against a total of three walks, and has allowed just two home runs in four starts since allowing five solo shots against the Rays on August 12. He's going for his 20th win in this game, having reached that total for the first time last year. That win would also be his 60th in his three seasons with the Yankees. He's arguably having his second-best major league season, edging out his 2007 AL Cy Young award-winning campaign. Oh, and he's left-handed and just turned 31. There's no way that he won't at the very least leverage his opt-out clause to increase the value of his contract this winter.

Per Aaron Gleeman, Santana's 2.13 ERA since the All-Star break is the fourth-best mark in baseball over that span (the worst: A.J. Burnett with a 7.81). He had an incredible four-start run in late July into early August that saw him record all but two outs of the four games he started, completing three of them, allowing no more than one run in any, and kicking things off with a no-hitter in Cleveland. In five starts since then, he's come back to earth a bit, going 2-2 with a 3.57 ERA that looks more like the real Ervin Santana. Two starts ago, he walked seven Mariners, but still pulled out a quality start, and with those seven bases on balls on his ledger he has struck out just four more men than he has walked over those last five starts. He last faced the Yankees in June, turning in a quality start only to lose 3-2 to Sabathia, with all three runs scoring on home runs by Robinson Cano and Alex Rodriguez.

Going back to the beginning of June, Freddy Garcia has established a pattern of a disaster start every six turns, which, coming off a disaster against the Orioles, doesn't bode well for his postseason performance, but does bode well for Sunday's start. Worth noting: after not allowing a home run in ten starts prior to cutting his finger, he has allowed three taters in 8 2/3 innings over his last two starts. Slightly less worth noting: three of Garcia's last four starts came against the Orioles. He allowed three runs in his first 18 innings against the O's this year and seven in his last 2 2/3.