In Defense of Boone Logan

Share All sharing options for: In Defense of Boone Logan 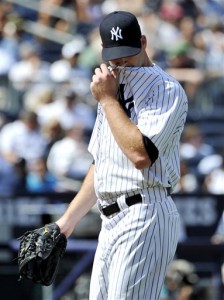 As frustrating as Boone Logan's occasional failures may be, they need to be kept in perspective. (AP)

The Proctorology that the Yankees suffered through on Thursday was an annoying way to lose a ballgame, but there were other things to be annoyed about when it came to the team's pitching performance. Ivan Nova gave the Yankees just 5.1 innings and walked three while striking out two. Boone Logan surrendered an RBI double to Chris Davis, the one batter he faced, scoring what was the third run charged to Nova's line. Rafael Soriano allowed three hits in his lone inning of work and surrendered the game-tying run via an RBI single to Robert Andino, that after Curtis Granderson had cut down a runner at the plate for the second straight inning. In all, Yankee pitchers allowed 19 baserunners 9.1 innings, a performance worse than the final score indicated.

Because of that, they lost for the second straight game, that after winning six in a row and nine out of 10 while gaining a whopping 4.5 games on the Red Sox, going from two down to 2.5 up. In the grand scheme, there's nothing to bitch about here. And yet some persist.

Logan's outing was the object of a particular amount of grousing on Twitter; the LOOGY failed to retire the only hitter he faced and allowed a run scored for the second straight game, whereupon it was decided that he was suddenly worthy of the tag Lefthanded No Out Guy.

This is the problem with being a specialist; when your role is limited to one or two batters at a time, once every few games, you're not going to get the job done to everyone's satisfaction. Logan has actually faced around three batters per appearance this season, and he's held opponents to a .311 OBP overall, which isn't great, but if you draw the line at the point where he lowered his arm angle in that late-June series in Cincinnati, his splits go from .250/.342/.328 before to .253/.284/.470 after; he's retiring hitters with much more frequently, but when he gives up a hit, it's a damaging one. Here's a closer look at the breakdown:

No doubt, lefties have hit him harder in the latter sample, but at the same time, he's throwing a ton more strikes; he hasn't walked a single hitter since August 7, and his OPS against lefties, has actually dropped more than 40 points.

What gets me is that we in the analytic community spend so much time emphasizing the defense-independent pitcher skills (strikeouts, walks, and home runs) and de-emphasizing the defense-dependent ones (balls in play), only to throw those concepts out the window when it comes to a job built upon the smallest of sample sizes, that of the lefty specialist. Forget that semi-arbitrary endpoint circus above and step back for a moment to examine Logan's stats relative to the other Yankee relievers. He has the second-highest strikeout rate (10.2 per nine, behind David Robertson), the second-lowest walk rate (2.7 per nine, behind Mariano Rivera), and the second-best strikeout-to-walk ratio (3.8, behind Rivera). His homer rate (1.0 per nine) is the highest among the key relievers, but it's better than half of the Yankees' six-man rotation, and no worse than league average — that's while pitching in a hitter's park. His estimated ERA via FIP is 3.24, third behind Robertson (1.82) and Rivera (2.32), ahead of Cory Wade (3.43), Hector Noesi (3.63), Luis Ayala (4.02) and Rafael Soriano (4.50), not to mention every starter besides CC Sabathia.

Alas, Logan's batting average on balls in play is a gaudy .324, the highest among the key relievers. If you believe that pitchers don't have a great deal of control of such things, that luck and randomness are bigger factors, particularly at smaller sample sizes — and there is by now a mountain of evidence to support that point — then you just have to live with the vagaries of what happens when contact is made. You can't have it both ways. The more important thing with Logan's performance is that it's not made all that often (remember that strikeout rate). Focus on the larger picture, and bet on the skills, not the randomness.