Weird and Wet in the Wee Hours

Share All sharing options for: Weird and Wet in the Wee Hours 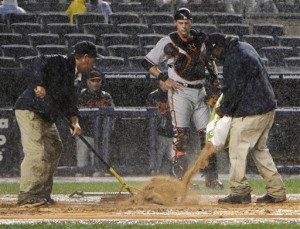 On Tuesday night, the Yankee Stadium grounds crew attempted to hold back the ocean with a rake. (AP)

Tuesday night's Yankees-Orioles game was one of the most ridiculous games in recent memory, piling absurdity upon absurdity into the wee hours of the morning. The game didn't officially start until 11:08 PM, around four hours after it was scheduled to begin, and was played in front of less than a thousand fans under conditions that would have otherwise had animals boarding by twosies-twosies. While the decision to begin a rain-threatened game is generally in the hands of a home team until first pitch (after which the umpires are in control), the playoff seeding implications apparently put this one in the hands of Major League Baseball. Nonetheless, making the Orioles play through it felt like a bit of retribution for their inept manipulation of the schedule around Hurricane Irene. Watching a sodden Buck Showalter struggle to grouse without a snorkel at hand was a good enough reason to stay up late in and of itself. In the end, the Yankees won a weird affair that featured the following:

• An adventurous night for Jorge Posada. Posada put the game's first run on the board with a solo homer off Orioles starter Tommy Hunter in the third inning, his 13th homer of the year and his third in his last six starts, a stretch that certainly keeps his bid for a share of the DH role alive, Jesus Montero's heroics be damned. In his next at-bat, in the fifth inning, he hustled down the first base line and reached safely on an error by Mark Reynolds, who took away a base hit only to bobble the ball as he stumbled into foul territory; Posada may or may not have beaten Hunter to the bag, but in any event he was ruled safe. Posada then showed off his wheels by coming around to score when Francisco Cervelli's warning track flyball — nearly his third homer in a week — was dropped by left fielder Matt Angle. It helped that catcher Matt Wieters dropped the relay throw as well; that made the score 2-0. But wait, there's more! Posada reached on another error in the seventh, this time as Hunter threw the ball away, but he took the slightest turn after passing first base, then stopped, and was tagged out.

• An equally adventurous night for Cervelli. His fifth-inning flyball might have gone out under drier and less windy conditions, but the backup backstop would not be denied. Right after Posada was called out, Cervelli tagged another one to left field. Two fans tried to catch the ball, only to drop it back into the field of play, while Angle mis-angled the ball, with a futile leap that was off by several feet. The umpires initially ruled a home run, and upon reviewing, upheld the call — perhaps more out of expedience than anything else. The ruling cheesed off Showalter, gave the Yankees a 4-3 lead, and stood as Cervelli's fourth homer of the season and his third in his last 14 plate appearances, after hitting just two in his first 541. Cervelli's now hitting .275/.333/.408, while the average major league catcher is hitting .245/.314/.388; in other words, he's about 20 points ahead of the game in both OBP and SLG. I've already declared a personal moratorium on calling him useless, as he has certainly enlivened the dog days of the season.

• Cervelli's homer was immediately followed by a solo shot off the right field foul pole by Brett Gardner, on a 3-0 count no less. It was Gardner's seventh homer of the year and the 200th one hit by the Yankees overall, and it gave the Yankees their fifth and final run. The odds of Cervelli and Gardner hitting back-to-back homers are approximately eleventy-bajillion to one.

• A strong effort by Phil Hughes. Rocked for six runs in each of his past two turns after a promising four-start stretch, here he was much more effective. He threw first-pitch strikes to 21 out of 26 hitters, and held the O's scoreless on three hits and one walk through his first five frames. He began leaving his pitches up in the sixth, and with two outs and a man on, served up the mother of all meatballs to Wieters on an 0-2 count for a game-tying two-run homer. Still, six innings and two runs with a five-to-one strikeout-to-walk ratio is something that the Yankees will settle for from any of their starters, and it was much needed for a pitcher whose spot in the rotation appears to be on the ropes. Hughes has a 5.10 ERA since returning from the disabled list, but he's compiled six quality starts out of 10 in that time, with a 3.99 FIP. Barring a strong September, he won't draw consideration for a postseason start, but such a showing would keep himself in the picture for next season.

• There was probably more weirdness to be had, but I must confess that I retired in the eighth inning; well after 2 AM, the Sandman got the better of me before he did the same to the Orioles.

Ugly conditions or no, the win marked the Yankees' sixth straight, and maintained their AL East lead over the Red Sox at two and a half games. Still, it was ridiculous that the two teams had to play under such conditions, and a minor miracle nobody got injured or trampled boarding the post-game ark.