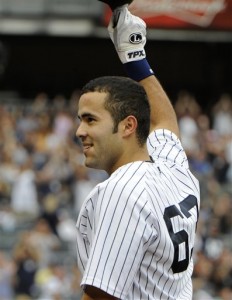 It didn't take long for Jesus Montero to make friends with the Yankee Stadium crowd. (AP)

Yankee Stadium takes a fair bit of flak for its short right field dimensions. Only Boston's Fenway Park (302 feet) and San Francisco's AT&T Park (309 feet) have shorter distances to the right field foul pole, and neither are as short to right center field; no other major league ballpark is. Nonetheless, as easy as it is for lefty hitters to reach via home runs, only a small handful of righties have managed to reach there since the park opened in 2009.

This year, just five homers to Yankee Stadium's right field had come off the bats of Yankee righties, two apiece by Alex Rodriguez (one of them on Sunday), two by Russell Martin in the 22-9 win over the A's, and one by Mark Teixiera, and just five opponents had done so as well: Kevin Youkilis, B.J. Upton, Reynolds and Derrek Lee (both in the same game, against A.J. Burnett), and Scott Sizemore (also in that A's game). If you can count the guys who've done it in 2011 on two hands, it's a pretty rare feat.

Jesus Montero joined that exclusive club in emphatic fashion on Monday, connecting for not one but two opposite field homers to right field, the first two homers of his major league career. The pair of shots — both just shy of 400 feet, enough to get out of just about any ballpark — was well-timed, for the first broke an 8-8 deadlock in the fifth inning, and the second provided a pair of insurance runs in the seventh, runs that the Yankees needed to hold on to win 11-10. Deservedly, the rookie earned a pair of curtain calls for his efforts, the beginning of what is hopefully a long relationship with the Bronx crowd.

Montero's arrival in pinstripes rated as one of the most anticipated events in Yankeeland this season. We clamored all season long for Montero, almost surely to the annoyance of impartial observers. Through his first three games, he had offered hints of his promise, going 3-for-10 while showing himself to be a tough out. On Monday, he showed what the hype was really about. He won't sustain that sexy .385/.467/.846 batting line forever, but Monday's performance showed that he wouldn't be smothered by expectations, and guaranteed him a longer look in the DH spot, not only against lefties — all four of Montero's starts have come against southpaws — but also against righties as well. Jorge Posada's thin slice of the playing time pie may have gotten just a bit thinner, though it was the veteran backstop-turned-DH who reportedly egged the rookie out of the dugout for his second helping of cheers.

The game was a see-saw affair that featured plenty of early fireworks. Nick Markakis connected for a solo homer off Freddy Garcia in the first inning, a rare enough occurrence given that prior to his previous outing, the Chief had gone 11 starts without letting a ball out of the park. The Yankees responded by jumping on heralded-but-suddenly-hapless O's starter Brian Matusz via Mark Teixeira's 36th homer of the of the year and an RBI double by Andruw Jones. Baltimore bounced back with a four-run second featuring five hits and a passed ball by Russell Martin, but the Bronx Bombers responded in kind via a Curtis Granderson RBI double and then a grand slam by Robinson Cano, his third in the past month.

Garcia still couldn't hold the Orioles; instead he gave up a two-run homer to Mark Reynolds, making this the first time he allowed multiple homers since May 15, a span of 15 starts, and pushing him to a season-high seven runs allowed. That was enough for a hook, just the second time he's been pulled before giving the Yankees at least five innings, and on came — wait for it — Scott Proctor, making his first appearance for the Yankees since July 27, 2007. Proctor's work wasn't spotless, but of the three hits and one walk he allowed over two innings, the only blow of any consequence was Robert Andino's solo homer.

The slugfest was knotted at 8-8 when Montero came to bat to lead off the fifth inning against Jim Johnson, the Orioles' top setup man and a pitcher who had allowed just three homers in 76.2 innings for the season, only one of them to righties. Alas, he left a fastball over the plate, and the 21-year-old phenom connected for a 399-foot shot to give the Yankees a 9-8 lead and earn his first major league curtain call in the process.

That would have been enough to thrill just about every Yankee follower, but Jesus had a second coming (sorry). With Johnson still in the game in the seventh, one out and one on, the kid hit mashed a 396-foot tater, a near-carbon copy that furthered the lead to 11-8. The bullpen scuffled the rest of the way, with Boone Logan and Mariano Rivera each surrendering a run; the latter let the tying and go-ahead runs get to third and second base before striking out pesky J.J. Hardy to end the affair.

The shakiness of Garcia and the Yankee bullpen — which held the Orioles to three runs in 6.1 innings over the course of six pitchers — will be soon forgotten. The work of Montero won't be; this looks like the beginning of a beautiful friendship.