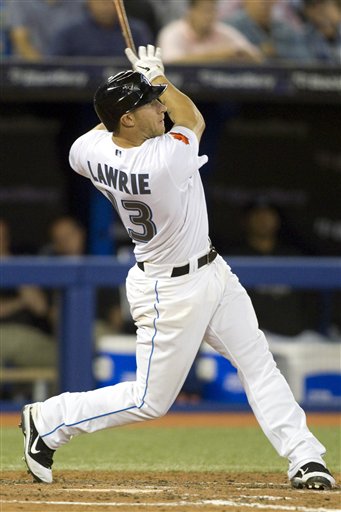 The Blue Jays have been busy on the trade market since the Yankees last saw them, making a big splash at the trading deadline by expertly working a two-pronged trade that netted them a potential star center fielder in 25-year-old Colby Rasmus, then making a challenge trade with the Diamondbacks that has little up-side beyond a potential extra pick in next year's draft. Here's the net results of those trades from the Blue Jays' perspective:

The only player who really matters on the latter list is Rasmus, who was the Cardinals top pick in the 2005 draft (28th overall), and was rated the third-best prospect in baseball heading into the 2009 season by Baseball America, and hit .279/.361/.498 with 23 homers as a 23-year-old sophomore last year. He's a potential star whom the Cardinals soured on after he butted heads with skipper Tony La Rusa and struggled to repeat his strong 2010 campaign. Unfortunately, he's on the disabled list with a jammed wrist right now, so Yankee fans will have to wait until next year to get heir first look at him in a Jays uniform.

As for the rest, Miller has already be released. Tallet has been designated for assignment. Johnson is a free agent after this season. The Jays are hoping he'll be classified a Type-A, thus giving them an extra first-round pick they wouldn't have gotten as compensation for the departed Hill, but there are a lot of ifs there: if he is a Type-A (he was right on the borderline when traded), if he can be convinced to reject arbitration, and if another team is willing to give up a first-round pick to sign him.

That leaves Walters and Teahen as the players who will still be teammates of Rasmus's next year. Walters is a fringe righty who will be 27 in March, an organizational swing-man who can fill a roster spot when needed but seems unlikely to ever be much more than a long-man or replacement starter. Teahen, who is owed $5.5 millon next season, was part of the price of acquiring Rasmus, not part of the bounty. He has hit .254/.313/.391 (88 OPS+) over the past four seasons, and just .181/.247/.290 this season, including a 1-for-20 performance with Toronto (the one was a home run, as if that makes it better).

Still, the Jays gave up almost nothing to get Rasmus and perhaps that extra first-round pick. Hill has made Teahen look good the last two seasons, making it a sure bet that the Diamondbacks won't pick up his $8 million option for 2012 (nor would have the Jays), even if he does keep up the hot hitting he has done in eight games since the trade. McDonald and Patterson are also due to be a free agents. Frasor and Dotel have options for 2012, worth $3.75 million and $3.5 million, respectively, but Dotel will be 38 in November and has played for 11 teams in the last seven seasons.

Ultimately, what the Jays gave up for Rasmus was now-26-year-old, team controlled lefty Rzepczynski, who settled into a bullpen roll this year after struggling as a starter, soon-to-be-25-year-old righty rookie starter Zach Stewart, who is not a front-line talent, and maybe one year of Frasor, a 34-year-old righty set-up man. That's outstanding work by Jays general manager Alex Anthopolous. Rasmus and Brett Lawrie, the third base prospect acquired from the Brewers for Shaun Marcum during the offseason who has hit .340/.392/.713 with seven homers in 26 games since his major league debut in early August, are two top young talents that could add a great deal of production to the the Blue Jays lineup next year and beyond, a scary thought when one considers that this year's Jays are already fourth in the AL in runs scored per game.

Since being recalled for the Yankees' double-header on July 30, Nova has gone 6-0 with a 3.60 ERA and a solid 6.8 K/9. He has also been mixing six pitches, including a pair of 93 mile per hour fastballs (two- and four-seam), a curve, change, slider, and cutter, getting a high percentage of swings and misses with each of the last three (per TexasLeaguers.com). In early July, the Yankees decided he was their sixth-best pitcher, now one could argue that he's their number-two.

Morrow would have led the league with his 10.9 strikeouts per nine innings last year if the Jays didn't cap his innings short of a qualifying total. This year, he is leading the league again with a 10.3 K/9, has reduced his walks (3.04 K/BB), and is having better luck on balls in play, but somehow his ERA is higher than it was a year ago at a similar innings total. The trouble seems to lie in his batted ball types. Morrow's giving up more fly balls, and thus more home runs, and hasn't induced a single double play all year despite having 122 opportunities to do so. Morrow has always been a fly-ball pitcher with a poor double-play rate, but he was trending away from that the last two years. Seeing him regress in that department despite continued success elsewhere is disappointing and a blow to the Jays' progress.

Romero has been essentially the same pitcher he was last year--a solid, groundballing lefty changeup artist--but with much better luck on balls in play, which has helped to drop his ERA by nine-tenths of a run and put him on the periphery of the Cy Young discussion. He enters this game with an active string of seven-straight quality starts during which he has gone 7-0 with a 1.72 ERA and a .154 BABIP. He had two strong starts against the Yankees earlier in the year, but lasted just five innings and took the loss against them when they last met in mid-July.

Colon reversed something of a downward swing with a strong start in Baltimore his last time out in which he was both efficient (just 103 pitches in 7 2/3 innings) and kept the ball in the ballpark (after allowing six home runs in his previous four starts). He'll be looking to avenge his worst start of the year, that perfect storm when he gave up eight runs without escaping the first inning in Toronto in mid-July.

Since being recalled from Triple-A and re-installed in the Jays rotation at the end of June, Cecil has posted a 3.92 ERA in a dozen starts, going at least six innings every time out, and a 3.54 mark in his last 11. However, just one of his last four starts was quality, with that quartet yielding a 5.13 ERA and three Toronto losses. The 25-year-old throws a sinker/slider combo with an 89 mile per hour fastball, but throws none of those as often as his 81 mile per hour changeup. However, unlike fellow lefty changeup artist Romero, he doesn't have a reverse split and is, in fact, murder on his fellow southpaws, holding them to a .186/.274/.246 line this year, and that's with his weak April included. That poor April performance (1-2, 6.86) concluded with the Yankees scoring five runs in five innings against him on April 20. He hasn't faced them since.

Garcia isn't confirmed for this game, but either he or CC Sabathia will make this start, with the other going on Monday. Sabathia followed Garcia the last time through the rotation, but is being considered for Sunday's start because he would be on normal rest given that the Yankees are still using a six-man rotation.