Share All sharing options for: Montero, 0-for-4, is a MASSIVE Bust

Just kidding. Not every prospect hits a home run in his first at-bat, or even his first cup of coffee. Heck, the great Tyrus Raymond Cobb himself hit only .240 in his first go-round. Give Montero time and he’ll come around. 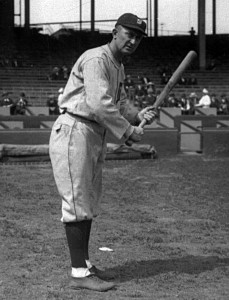 The Georgia Peach: Even he took awhile to get going. (AP)

I was just thinking about Alfonso Soriano. In 2002, Soriano had what is probably still the greatest offensive season by a Yankees second baseman, hitting .300/.332/.547 with 51 doubles, 39 home runs, and 41 stolen bases. That’s ten more doubles and ten more home runs than Robinson Cano hit last year. Soriano had two call-ups by the Yankees prior to becoming a regular in 2001. In those two visits combined, he hit .172/.186/.379 in 31 games. He walked once in 61 plate appearances. I’m not going to look up what I wrote at the time, but that fact alone makes me sure I was down on him. Subsequently he made seven all-star teams and has 338 career home runs. Sure, he’s not much good anymore and maybe there are only about four seasons in there that you’d really want to keep for your scrapbook, but that’s not the point—the point is, it took time but he figured things out.

The real mystery this Friday morning after, is not how much hitting Montero will do—this year or some other, he will hit—but if A.J. Burnett can build on what was a good, albeit brief, start. Yes, he gave up a two-run homer to Dustin Pedroia, but he didn’t fall apart, didn’t get bombed out of the game. His revised mechanics seemed to give him a bit more command, and he hung in there. For Thursday, it was enough.

Before getting carried away, we should note again the brevity of the start in innings, not pitches. We should observe that Boone Logan and Corey Wade stranded two runners, and had they not done so, Burnett’s line would have been much uglier. As he departed the game on the wrong end of the 2-1 score, I thought of the irony: detractors spent years saying that Bert Blyleven, who lost approximately a thousand 1-0 games, shouldn’t be in the Hall of Fame because he "pitched well enough to lose." Burnett, though, would be hailed as a hero for giving up only two runs in five innings and leaving the bullpen with a game that was still in reach.

I’m coming to the conclusion that if forced to chose between Burnett and Phil Hughes, the answer may be "neither," and that the fifth starter’s slot should be turned over to a Scranton prospect of the day over the final month of the season. Assuming continued health on the part of all six starters, the decision is irrelevant, because the Yankees are nigh unto a lock for the postseason, and in the postseason you need four starters, not five. If neither Hughes nor Burnett makes progress over the last month, well, c’est la vie—CC Sabathia, Bartolo Colon, Freddy Garcia, and Ivan Nova will do just fine. One of the two is left off the roster, the other goes to the bullpen—and, you would think, just sits there: despite all the angling after a second lefty, the bullpen doesn’t need the help, particularly from a defrocked starter.

Ah, but you can’t assume health, particularly not with this crew of mostly aged wonders, so the fifth starter’s battle does matter after all, because playoff time one or more of the others could find his way to the disabled list and suddenly number five is number four, and suddenly facing the Tigers or Rangers in round one. To me, that still suggests the Scranton prospect of the day scenario. Look: any decision the Yankees make about Burnett and Hughes is going to be based on a small sample. Why not gamble on the upside and try someone else altogether? Neither has been impressive. Chances are neither will be impressive in all of the roughly five starts remaining, so no matter what happens, you’re going to have doubts. If Unknown Quantity does better, you might just find an insurance policy that has a better chance of paying off.

I know; it won’t happen. I always like to dream on the upside. There are some teams that take that chance—look at the Indians this year: they emptied their entire farm system into this race. Look how the Angels have turned to Mike Trout as an antidote to Vernon Wells. Look where the Diamondbacks are, in part because they took away Armando Galaragga’s rotation spot and gave it to Josh Collmenter. You think Josh Collmenter is a Jesus Montero-level prospect? Think anyone ever confused him with Stephen Strasburg? In a word, nuh-uh. These gambles can pay off, there is still time. For the Yankees, either isn’t the only choice.