Called Up to Sit Down

Share All sharing options for: Called Up to Sit Down 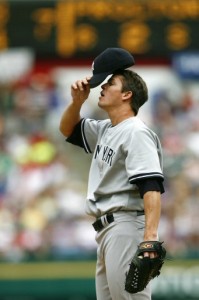 Scott Proctor is back with the Yankees, but why? (AP)

Jesus Montero's the one getting all the ink, and rightly so, but with big league rosters expanding as of today, the Yankees have also recalled five other players. All of them are familiar in some way, but that doesn't mean there isn't at least one surprise.

Chris Dickerson and Brandon Laird have spent time with the Yankees already this season, albeit probably not as much as any of us here at the Pinstriped Bible expected at the outset of the season. Dickerson has played 41 games with the Yankees but received just 31 plate appearances, hardly enough to make any kind of judgment about his performance. For what it's worth, he's hit .321/.367/.393 in the bigs, albeit with a 10/1 strikeout-to-walk ratio. His .241/.341/.325 performance at Scranton/Wilkes-Barre is pretty grim, tempered only by the fact that he managed to steal 18 bases in 20 attempts. That's why he's back; he's auditioning for a possible postseason spot on the roster as a pinch-running/defensive replacement specialist. Don't bet on seeing him swing a stick too often.

Laird got to play all of four games for the Yankees in late July, going 1-for-6 with a couple of walks and a sacrifice bunt before being sent back to Scranton. His numbers at Triple-A have been a real disappointment, .260/.288/.422, with 16 homers but a mere 16 unintentional walks in 489 plate appearances. While never strong before, his walk rates had never been quite that dire; it takes a special hacktastic ineptitude to work to ball four in just 3.3 percent of your plate appearances. With Alex Rodriguez's thumb a question mark, Laird's around as hot corner depth, but even then he's behind Eric Chavez and Eduardo Nunez, with future prospects that look more like Eric Duncan (who tore up the Double-A Texas League at the ripe old age of 26 this year) than a Chavez alternative. When the Sex Pistols sang "No future for you," they might as well have been talking about guys who can't manage a .300 OBP in Triple-A.

Righty reliever Lance Pendleton has thrown 14 innings in 11 appearances for the Yanks this year. His 3.21 ERA is only superficially respectable; with an 8/10 K/BB ratio and two homers allowed, his FIP is 5.88. With numbers like that, he's around solely for mop-and-bucket duty, but then, the world needs the occasional cleanup in aisle nine — at least until Hector Noesi gets back, which should be next week; after being sent down on August 28, he has to wait 10 days before he can return.

Lefty Raul Valdes is actually a hitchhiker Brian Cashman picked up on the New Jersey Turnpike. When you see a guy standing by the side of the road, holding out his left thumb while wearing a right-handed mitt, it's uncouth to any questions other than "When did you last pitch?" So he's here. He'll have more company in the futile second southpaw division when Aaron Laffey returns from his 10-day exile, which ends... ah, who cares?

The surprise in the bunch is Scott Proctor, who last pitched for the Yankees in 2007, when he was traded to the Dodgers at the deadline in exchange for Wilson Betemit. By the next season, he was back in the hands of Joe Torre, who left the Bronx for L.A. in order to continue grinding Proctor's arm to a pulp — okay, that's not entirely fair. Proctor was already a 29-year-old journeyman when he made 83 appearances in 2006, and he did the same in 2007 split between the two teams. Having toiled in the minors for as long as he did, you can't blame him for being overeager to show his worth, for gritting his teeth and telling his manager that sure, he was available for an inning. Alas, that was a short-sighted strategy, for by mid-2008 — the only season in which he had a salary above $1 million — Proctor was battling elbow problems. Tendonitis, surgery to remove a bone spur, aggravated scar tissue, and finally Tommy John surgery, all inside the space of a year.

Proctor has just 35 major league innings with a 6.43 ERA and a 24/23 K/BB ratio since then, all with the Braves, who finally cut bait on August 10. The Yankees signed him and he put up an 8/2 K/BB ratio in seven innings at Scranton, a nothing-sized sample; he had done even better with the Braves' Triple-A affiliate (24/5 in 17 innings), and that wound up translating into nothing helpful at the big league level. He's no threat to make the postseason roster; his presence feels like more of a courtesy than anything else, an opportunity to throw a few decent mop-up innings here and there and earn a non-roster invitation somewhere next spring.

While it's fair to hope that Proctor picks his career up off the mat, it's at least somewhat irksome that his innings could come at the expense of youngsters who could really use a look. Neither Manny Banuelos nor Dellin Betances are slated for callups because of innings counts and/or roster ramifications, but David Phelps or Adam Warren are guys who (hopefully) still may have futures in pinstripes, arms who haven't gotten the opportunity to show their wares at the big league level yet despite solid seasons in Triple-A. It's quite possible that those two will be along once the Scranton season concludes on September 5, but it would be nice to be able to confirm with our own eyes that they're something besides distant rumors, particularly if the Interminable Fifth Starter Derby of Doom between A.J. Burnett and Phil Hughes continues to go as smashingly well as their last few turns. We can dream, can't we?