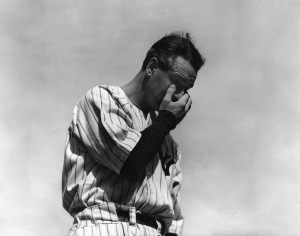 Lou Gehrig passed away 70 years ago this June, so the fact that we’re still talking about how to treat amyotrophic lateral sclerosis shows just how mysterious and difficult the disease which laid him low can be for sufferers and scientists alike. Seven decades later, researchers may finally have found the path to a cure.

The Northwestern team identified the breakdown of cellular recycling systems in the neurons of the spinal cord and brain of ALS patients that results in the nervous system slowly losing its ability to carry brain signals to the body's muscular system.

Without those signals, patients gradually are deprived of the ability to move, talk, swallow and breathe.

A particular protein that directs cellular repair is at issue; it malfunctions, damaged cells don’t get fixed, and the broken cells block the transmission of signals from the brain to the spinal cord, leading to muscular atrophy and paralysis. That’s my layman’s paraphrase.

Now that researchers know what to look for, they can try to devise drugs that compensate for that particular protein’s failure. No doubt this is easier said than done—think of how difficult it has been to slay certain viruses, even the way they work has been well understood—but at least there is now the possibility of slaying this dragon when there was none before. Let’s pray that the next step is relatively simple, so that one day "Lou Gehrig’s Disease" will be a manageable condition, not a death sentence (and may the insurance companies cover the cure).