A Question About Granderson

Share All sharing options for: A Question About Granderson 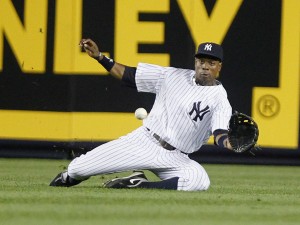 Granderson: Falling down in the field? (AP)

With Curtis Granderson leading the American League in runs, RBIs, and standing second in the home run derby, we’ve begun to hear mumblings about an MVP bid for the Yankees center fielder. Who says Jose Bautista has to win it? Not I, especially as he’s had an extremely quiet second half.

Now, an easy way to gut-check one’s feelings on this is to look at WAR or WARP, wins above replacement, an all-in-one statistic that sums up offense, defense, and baserunning. The only problem is that there is no consensus formula for every aspect of WARP, so if you go to different sources, like Baseball-Reference or Baseball Prospectus, you get slightly different answers. Here are the top ten in AL WARP, position players only, for three leading sites:

One of the main reasons for variance between these measurements is the way they handle fielding, with each having different ways of tabulating a player’s defensive contribution. What is fascinating is that despite this, all three rankings agree that Granderson shouldn’t be anywhere near the MVP award, and they agree on the reason: they think he has been a poor defensive player this year. Conversely, they agree that Brett Gardner has been a spectacular defensive player, which is why he shows up in the top 10 for two of the three sites (Gardner ranks 17th in BP’s hierarchy). BP’s fielding runs say that Granderson has set the Yankees back about 10 runs with the glove beyond what an average defender would have done, equivalent to a full win. Fangraphs’ version of the same says about the same thing with -8 runs, while BB-Ref generously only penalizes him seven runs.

What perplexes me here is that I can’t see it, whether on television or at the ballpark. When we talk about Derek Jeter’s defensive deficiencies, I have always been able to see his difficulties going to his left. The statistics merely confirmed what I already knew. In this case, Granderson’s problems aren’t obvious to me, so I ask you: have you noticed Granderson fail to play a solid center field?