The Worst of It

Share All sharing options for: The Worst of It 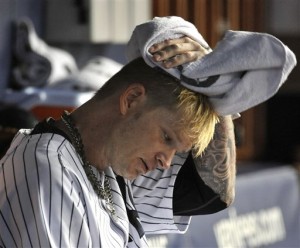 It's not the haircut, it's the homers. And the walks. (AP)

Tuesday night's Yankees loss to the Angels had so many frustrating elements to it, so many reasons to throw objects at the TV set, to momentarily feel kinship with the enraged London rioters, that it's tough to know where to begin, even if you don't actually have to sweep up broken glass or put out a fire. Starting at the end and working backwards, you had the following:

• A game-ending out on the basepaths by Curtis Granderson, who represented the tying run on first base with two outs and Mark Teixeira at the plate. Granderson was picked off by Angels closer Jordan Walden using one of those exasperating fake-to-third, throw-to-first pickoff plays, the kind that if you're an observer of a certain age, all you can hear is Rocky the Flying Squirrel complaining, "But that trick never works!" Walden had already tried it twice when he finally caught Granderson breaking for second. A quick rundown ensued, but Granderson was toast. Game over. Have the Yankees suffered another game-ending pickoff since it happened to Charles Gipson against the Cubs in 2003? I can't remember, fortunately.

• A bad ninth-inning strike call against Teixeira by home plate umpire Chris Guccione on a 1-1 fastball that was clearly a few inches outside the strike zone. That put Teixeira in a 1-2 hole, increasing the urgency with which Granderson felt he needed to get to second base. Guccione did not have a good night behind the plate, though his calls cut both ways; two of the more egregious ones were checked swing strikes that went against the Angels, and the second of which resulted in Mike Scioscia's ejection, but I'm getting ahead of myself.

• A two-run ninth-inning homer by Bobby Abreu off Mariano Rivera that gave the Angels a 6-4 lead. Abreu entered the game with just four homers and a .342 slugging percentage for the season, but he connected not once but twice against the Yankees on Tuesday night, a game-tying solo shot off A.J. Burnett in the sixth, and then the winner off Rivera in the ninth, on a cutter that didn't cut. It was the second appearance in a row in which Rivera gave up either the tying or the winning run, an unsettling situation given that any slump might signal either an injury or the beginning of the end of the 41-year-old closer's fine career. Since assuming closer duties in 1997 — a span of 944 appearances — Rivera's only been scored upon in two straight games 21 times, and in three straight six times. Two of the latter happened last year, two of the former have happened in this one.

• A two-out, two-run double in the sixth inning by Jeff Mathis, who came into the game "hitting".181/.226/.259. The runs broke a 1-1 tie and helped turn Burnett's night into yet another nightmare via a four-run inning.

• Those runs were set up by an intentional walk of Maicer Izturis, as ordered by Joe Girardi. The Yankees are fourth in the league in issuing intentional walks, and while the Yankee skipper has gotten away with them more often than not, this isn't the first time one of his free passes has turned into a game-breaking big inning. Abreu had tied the game to lead off the sixth, the first run against Burnett on what had to that point been a surprisingly strong effort. But with one out, he issued a four-pitch walk to Mark Trumbo, who then tagged up and advanced to second on Vernon Wells' fly ball. With two outs, Girardi decided to walk the switch-hitting Izturis (.260/.328/.362 this year against righties) to face the righty-swinging Peter Bourjos (.241/.300/.360—in other words, not a whole lot worse), showing an inordinate amount of trust in a pitcher who needs no help in finding ways to put runners on base. Burnett fell behind 2-0, got back into the at-bat with a swinging strike and a foul, and then issued two more balls, walking a hitter who walks just five percent of the time, to load the bases. Mathis fell behind via the checked-swing strike that led to Scioscia being tossed, then looped a shot over the head of Granderson, who was playing very shallow. Burnett being Burnett, he compounded his woes by throwing a run-scoring wild pitch four pitches later, a run that of course would come back to haunt the Yankees.

• Burnett's start itself was an affront to the idea that the Yankees should put their best team on the field, as Jack Curry writes elsewhere on this site. Yankee fans' frustration with the man has nothing to do with his character or even his horrible new hairstyle — yesterday, the righty showed up in the clubhouse with a platinum blonde mushroom cut that looked stolen off a skatepunk half his age, giving the Twitterverse a good chuckle at his expense — and everything to do with the timing of his performance, and the way his contract grants him diplomatic immunity. Through the end of June he was basically league average, but at a time when the Yankees have emerged with six seemingly healthy starters, he's been the worst of the lot, and not by a little. Stats from July 1 — Ivan Nova's last turn before being exiled to Triple-A to accommodate Bartolo Colon's activation — through August 8:

While Burnett has missed plenty of bats and at times exhibited the electrifying stuff that netted him his big contract, his home run rate is more than double that of any other Yankee starter during that timespan. He's walked more hitters per nine as well, and his ERA and FIP are both the highest during this stretch by at least a run and a half. Furthermore, he has failed to notch a single quality start in that span, this in spite of facing some of the league's most impoverished offenses; even once you adjust for park using True Average, only one of the six teams he's faced ranks in the league's upper half: the Rays (6), Indians (9), A's (10), White Sox (12), and now the Angels (8). All without managing to go at least six innings while allowing three or fewer earned runs.

The Yankees won three of those previous six turns thanks to help from their offense and their bullpen, and Burnett's only truly awful night in that span was his August 3 start against the White Sox, when he sat a good long time while his offense rolled up 13 runs in the first three innings, which may have disrupted his rhythm. Still, the bottom line is that the numbers just aren't there to justify him getting starts at the expense of Nova and Hughes, both of whose schedules have been disrupted to accommodate Burnett. By rights, the latter — who's coming off his best start of the season, one that gave the Yankees hope that he could recover last year's first-half form — should have started last night even with Sunday's abbreviated relief appearance, but noooooo. Instead he'll skip a turn and pitch this coming Saturday.

The only number that seems to matter to the Yankee brass is $82.5 million. Girardi's loyalty to his struggling, expensive starter may be admirable on some level, but his words ring hollow when he tries to justify keeping him in the rotation. This pitch-to-contract situation has gone on long enough, and it exasperates far more than any of the other situations that led to Tuesday night's loss.