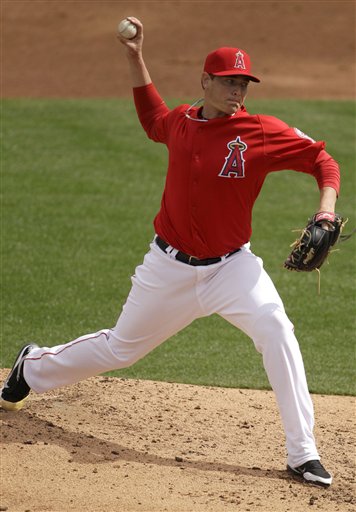 Garrett Richards will look to usURP the Yankees tonight. (AP)

The Angels announced that they were bouncing Joel Piñiero to the bullpen and calling up Double-A right-hander Garrett Richards to make Wednesday's start just as my Yankees-Angels Series Preview went live yesterday, so I wasn't able to respond to the move then, but with Richards' major league debut now just hours away, here's a quick look at the 23-year-old Angels prospect.

Drafted out of the University of Oklahoma in 2009 with the first-supplemental round pick received as compensation for the free-agent loss of Francisco Rodriguez, Richards has impressed in parts of three minor league seasons, striking out more than a man per inning in the low-minors while showing consistent and impressive control (2.5 BB/9 career). Richards, who has a classic pitcher's build on a six-foot-three frame, compliments his mid-90s heat with an excellent slider, and just two weeks ago Baseball Prospectus's Kevin Goldstein called him, "the highest-ceiling arm the Angels have."

However, Goldstein tempered that praise by pointing out that Richards has shown an ability to underwhelm despite his great stuff. Specifically, Richards' changeup is not a particularly valuable third pitch, and his strikeout rate has dropped considerably at Double-A, down a full three strikeouts per nine innings from a year ago to a middling 6.4 K/9.

All of that makes paints a picture in my mind of another A.J. Burnett. Their size and approach is similar--Richards works down in the zone, has good movement on his fastball, and at his best is a two-pitch pitcher who relies on strikeouts and ground balls--as is the criticism of not pitching up to the quality of their stuff. The key difference, and I'm sure there are plenty of others, is control: Richards has it, along with the ability to keep the ball in the park (just 0.5 HR/9 career). Burnett doesn't.

Richards has been on a nice roll since the end of May, going 7-1 with a 2.48 ERA in a dozen starts, three of them complete games. Still, his strikeouts have lagged, stuck at 6.5 K/9 over that span, and that was Double-A. The leap from Double-A Arkansas to the new Yankee Stadium is a big one.

Over the next two games, the Yankees will face two rookie starters they have never seen before. Back in my Bronx Banter days, I came up with the acronym URP for such Unfamiliar Rookie Pitchers. There was a perception at the time that the Yankees struggled the first time they faced a rookie starter, and when that did happen, one could say they had been URPed.

Here, then, are the pitching lines of the rookie pitchers to make their first career appearance against the Yankees as a starter this season:

That's not a huge sample, but it includes two top prospects in Britton and Piñeda, both of whom the Yankees faced early in the season before fatigue set it, and all five of those pitchers have pitched well in general this season, though three (Britton, Nicasio, and Cobb) have since succumbed to injury.

Here's aggregate line from those five:

That ERA is strong, but the WHIP is right around the American League average, the other numbers are all sub-par, not one of these five earned a win, only two turned in quality starts, and it looks as though the Yankees have had some bad luck on balls in play in these games. Perhaps you think the Yankees should do better against rookies, but there's nothing here to suggest they've been struggling against them. Also, it's worth remembering that these pitchers are in the majors because their teams believe they can get major league hitters out, and, again, in cases of the five pitchers above, those teams have largely been proven right.