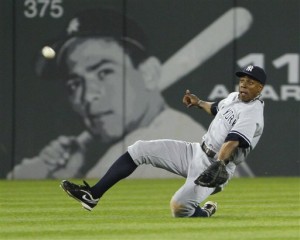 Curtis Granderson is enjoying a career year with the bat, but his defensive numbers raise some eyebrows. (AP)

A.J. Burnett had a nasty, brutish and short night on Wednesday, but before he started struggling, the Yankee offense staked him to a 13-1 lead through three innings. They ultimately pounded out a season-high 18 runs — the third time in nine games they've had 17 or more — on 23 hits, one shy of the high they set in Saturday evening's cremation of the Orioles. The rout was on from the get-go, with Brett Gardner and Derek Jeter both reaching on bunts (!), Curtis Granderson landing a bloop, Mark Teixeira hitting a sacrifice fly, and Robinson Cano following with a three-run blast to stake the Bronx Bombers to a 4-1 lead before White Sox starter Gavin Floyd had even gotten his second out. It was that kind of night.

Jeter had five hits for the second time this season (you may remember that other game) and just the fourth time in his career. Granderson had four hits and five RBI, driving in two runs with a second-inning triple, two more with a seventh-inning single, and a final one with an eight-inning double. Gardner, Cano and Eric Chavez had three hits apiece; the latter two both drove in four runs, with Chavez hitting his first home run in over a year. In all, every starter got a hit against the hapless Sox, who have looked dead in the water during this series, dead and pecked over by seagulls.

Granderson appears to be back on track following a mini-slump. From July 6 through July 23, he hit just .188/.333/.313 with one homer and three extra-base hits in 61 plate appearances. Since then, he's hit .381/.391/.714 with two homers and nine extra-base hits in 46 plate appearances; he also had four hits on Saturday night. He's all over the AL leaderboard, first in runs (98), second in slugging percentage (.576, a career-high), third in homers (28, two shy of tying his career high) and RBI (84 already a career high), fourth in True Average (.327), and sixth in Wins Above Replacement Player. Here's the leaderboard in the latter category:

It comes as a slight surprise that Granderson's no longer the league's most valuable center fielder, but Ellsbury has been surging lately, hitting .382/.430/.700 in July and collecting walk-off hits in each of the past two nights against Cleveland, the second of which was a two-run homer. Interestingly enough, the full win that separates him and Granderson is entirely due to defense. Granderson has the slight edge in the batting department thanks to his power (Ellsbury, who is slugging a robust .513, is eighth at .319), but Baseball Prospectus' Fielding Runs Above Average gives the Red Sock a 12.9-run edge, +6.0 to −6.9. Other defensive systems concur; Granderson is 7 runs below average according to Total Zone, 8 below according to Ultimate Zone Rating, and 12 below according to Defensive Runs Saved (a.k.a Plus/Minus), while Ellsbury's 9 above, 7.5 above, and 13 above, respectively.

Given the nature of defensive statistics, it's tough to take any one of these too seriously, particularly given that they can be 10-15 runs apart in a given year; last year Granderson was at −1, +6.4, −12 according to the aforementioned trio, and +1.8 according to FRAA. The consensus of the numbers is more compelling, as it does raise some eyebrows about Granderson's defense, particularly given that the Yankees have a choice of center fielders between him and Brett Gardner, whose numbers over the past two seasons have been off the charts: +16 FRAA, +42 TZ, +41 UZR, +32 DRS. There's always an issue with defensive stats when it comes to adjacent fielders; if both of them can get to the ball but one routinely lets the other handle it, that will skew the stats, but so long as one of them does the job, everything is copacetic from a team defense standpoint. That may be what's happening here, but in any event, it could be worth revisiting the choice of which of the two outfielders plays left field and which plays center field, if not now, then next spring. Until then, it's worth keeping an eye on who gets those balls in the left-center gap.