Will the Yankees Make a Deal?

Share All sharing options for: Will the Yankees Make a Deal? 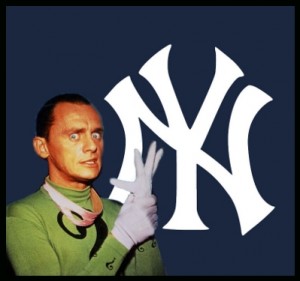 With just hours left to go until the non-waiver trading deadline, the Yankees have yet to make a move. Despite the 25 runs scored in yesterday's doubleheader, they are still short a reliable designated hitter and perhaps a starting pitcher or two. They could improve the starting rotation by making a purely internal trade--swapping A.J. Burnett for Ivan Nova--impractical, alas, because you can't send Burnett to the minors, though perhaps he would take an all-expenses trip to Europe--but that wouldn't solve the problem of Phil Hughes, or provide insurance for Bartolo Colon.

The Indians went big for Ubaldo Jimenez (assuming he passes his physical after the team's weird decision to start him with a trade imminent), making an extremely risky, prospect-heavy move of the kind Yankees have resisted. I still wonder about that resistance, as the Yankees are so hesitant to embrace their own young players that they are more trade chips than prospects, so may as well deal them when the right guy comes along. I've said many times, prospects that are neither used nor traded have precisely zero value and are getting less valuable all the time. Whether Ubaldo is that guy is another question. I'm not certain that he is.

One interesting question is if the Yankees might benefit from Boston's reluctance to take on Rich Harden. The price seemed to be cheap--Lars Anderson is almost a non-prospect at this point--and the pitcher is a free agent at the end of the season, so if the A's were willing to take a similarly marginal player from the Yankees, they could have a fragile yet occasionally dominant pitcher. One thing to worry about, though: Harden's home run rate this year. He's an extreme fly ball guy, and in the years since the termites started working on him his home run rate has really skyrocketed. He could be very dangerous--to himself--in Yankee Stadium.

Meanwhile, the bats are still out there. The Yankees have actually hit left-handed pitching very well and would seen not to need a right-handed bat as much as they could use a left-handed hitter who could platoon with Andruw Jones, who was hitting .263/.344/.513 going into Saturday's games. My attention keeps drifting to the Twins. Jason Kubel, a free agent at the end of the season, isn't a great hitter--he's almost the Hunter Pence of the American League--but is used to DHing and has value that is being obscured by tough Target Field; he's hit .331/.387/.537 on the road this year, with five of his six home runs. If you want to go for a player who should be, at least in theory, even cheaper, then how about letting old Jim Thome hit home run #600 in Yankees pinstripes? He's just four away. He no longer plays the field, and probably couldn't even in an emergency (as the Dodgers discovered in 2009) so he clogs up your roster to some degree, but he still has some left-lightning in his swing. The Twins have also made themselves an interesting lefty reliever in the arbitration-eligible Glen Perkins, so if you're dreaming on a package the possibility is there. I personally would be dreaming on Scott Baker, but I very much doubt he's available.