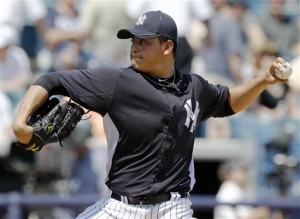 Manny Banuelos' impending promotion to Triple-A Scranton/Wilkes-Barre better positions him for a late-season appearance in the Bronx. (AP)

With the rest of the baseball world attuned to whether the Yankees will make a deal to beat the trade deadline, the organization does appear poised for a noteworthy move that could carry late-season ramifications. According to YESman Jack Curry, the Yankees will promote Manny Banuelos from Double-A to Triple-A in time for his next start, on Tuesday.

Though still regarded as one of the game's top pitching prospects — Baseball Prospectus colleague Kevin Goldstein ranked him 14th in his midseason Top 50 — the 20-year-old lefty has endured an uneven season at Double-A Trenton. He's made 20 starts with a 3.59 ERA while striking out 8.9 hitters per nine, but thrown just 95.1 innings — less than five per turn — because he's battled a recurrent blister problem and walked a gaudy 4.9 hitters per nine, largely due to problems commanding his fastball. It's not as though the trend has particularly abated, either. Here are his monthly splits:

The timing of Banuelos' walks is noteworthy, in that on a per-plate appearance basis, they're happening about twice as often with the bases empty than with men on base. Using estimated plate appearances from his basic splits at MiLB.com, it looks as though he's walking hitters in 16 percent of his PA with the bases empty, and just 8 percent men on base (for purposes of comparison, the major league average for 2011 is 7.5 percent with the bases empty, 9.1 percent with men on base). Banuelos' walks have been less damaging than average, because he's able to miss bats and to keep the ball on the ground; if he falls behind a hitter with the bases empty, he's got less to worry about by putting him on base thanks to the stuff and the confidence to go after the next guy. To one extent or another, this is something you see in a lot of good big league power/groundball pitchers; it's why their ERAs beat their estimated ERAs. Note that that's the case for Banuelos even with a scorching BABIP of .344. Note also that while he's allowed seven homers this year (0.7 per nine), six of them came in a five-start span in June.

Curry notes that by moving Banuelos up the ladder, the Yankees "will determine if he can be late-season addition." Our own Cliff Corcoran worries that it means he'll be stuffed into a situational role that will lead to Joba Chamberlain-like treatment down the road: "Prediction: Manny Banuelos will be a stretch-run LOOGY, Yanks will think his "stuff works best" in that role, rinse, repeat, waste." However, Curry suggests the possibility that the phenom could start, with Ivan Nova and/or Phil Hughes moving to the bullpen. That said, Banuelos is just 14 innings off his career high of 109 frames, and he threw just 89.2 last year including 25 in the Arizona Fall League. Given his age, it would rate as a surprise if the Yankees pushed him much further than another 50 innings this year.

Given the ability of Brian Cashman to operate with a great deal of stealth when he has to, it's too early to start congratulating the Yankees for bypassing the temptation to trade their A-list prospects for veterans at the deadline, and instead rely on their homegrown resources. Even after the 4 PM Eastern deadline, the team's ability to take on salary means that they're better equipped than most to pull off a waiver-period deal in August; for example, another team is unlikely to claim the pricey Wandy Rodriguez knowing that they'd be on the hook for his entire salary unless the Astros pull him back and pocket him for the season. Banuelos will have to show progress in Triple-A before he'll be trusted with an assignment in the Bronx, even out of the bullpen, and even then, he's likely to run up against his innings cap sooner or later.

That said, this lack of deadline activity does have the makings of a milepost in the Yankees ability to trust their own resources ahead of the typically expensive rentals out there for hire. We'll see if it holds.