Yesterday I checked in on the various starting pitchers whom the Yankees were keeping tabs on as the July 31 deadline approached. Today there's another name that's been added to the mix, that of Houston's Wandy Rodriguez. The Daily News' Mark Feinsand includes him in an update discussing the latest hitches regarding Ubaldo Jimenez and Hiroki Kuroda.

Rodriguez is an interesting target. He's a smallish 32-year-old lefty who's not blessed with outstanding velocity; his fastball averages just 89 MPH. However, he's the owner of an outstanding slow curve and a good, sinking changeup. He misses bats (8.3 strikeouts per nine from 2008 onward) with decent control (2.9 K/BB ratio in that span) and keeps the ball on the ground (1.28 GB/FB in that span) and in the park (0.9 HR/9 despite pitching half his games at hitter-friendly Minute Maid Park). He threw 400.2 innings while making 65 starts (71 percent of them quality) in 2009-2010, and he's been healthy this year, posting a 3.47 ERA in 19 turns while averaging 6.4 innings per start, generally with awful run support (below 4.0 per game in each of the past three seasons).

If there's a knock on Rodriguez, it's that he's rather streaky; my notes for his 2010 campaign include that he stumbled early (14 starts, 3-10, 6.09 ERA) but made a strong finish (18 starts, 8-2, 2.03 ERA, 9.5 K/9). This year, he was tagged for a 5.40 ERA through his first five starts; since then, he's posted a 2.84 ERA, but he did miss three weeks due to elbow inflammation, this after battling shoulder tendonitis during spring training. The quality of his work since then suggests he's physically sound, and while his dings and dents are still a cause for some concern, he's not Erik Bedard.

Rodriguez isn't cheap; he's in the first year of a three-year, $34 million deal. He'll make $10 million next season and $13 million in 2013, with a $13 million option that turns into a player option if he's traded. That may be enough to scare of some suitors, but it's a situation that plays to the Yankees' advantage. Given their deep pockets, they can absorb more cash and give up less in the way of prospects. That doesn't mean the Astros, who are dreadful and in dire need of rebuilding, are going to give him away; one still has to figure they would demand one of the Yankees' supposedly untouchable prospects, namely Jesus Montero, Dellin Betances, or Manny Banuelos. Obviously, that's a dealbreaker if Brian Cashman sticks to his current position of unwillingness to trade any of them, and it may be too much to surrender even one of them if the Yankees have to take on that much guaranteed salary. We'll see in the next 48 hours how serious Houston is about moving him. 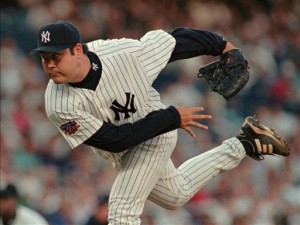 I was terribly saddened by the news of Hideki Irabu's apparent suicide, and by the seemingly callous reaction of more than one of the big-name writers who covered him during his time with the Yankees. More than anything, some of them seemed to be reminded of how put out they were by Irabu's moodiness and his problems integrating into the Yankees' clubhouse. Thankfully, both Steve and YES’ Jack Curry handled the matter with sensitivity and insight, but they're mensches. Some of the knee-jerk reactions around the Internet sickened me.

I have been thinking a whole lot about Japanese players this season, ever since the devastating earthquake back in March. Last week, the New York Times ran an outstanding piece on the lonely road Kei Igawa continues to walk as the most expensive organizational player of all time. He’s the Ronin of Trenton; with no chance of callup or even release so that he can pursue his dream elsewhere in the States, he’s effectively adrift without a master. The Yankees have cut deals to sell Igawa back to Japanese teams, but he has nixed them because he so desperately wants to make good over here. It’s a longshot for him to do so, but from the sound of the article he’s worked hard to add pitches to his repertoire, to find something that can get the hitters of this hemisphere out. The amount of money the Yankees are saving by not cutting him is a spit in the ocean of sunk cost. Give him up and let him move on.

The more I see reactions to the struggles of Igawa, Irabu, Daisuke Matsuzaka ("another chubby Easterner" in one of the more troubling pieces I read) and others, the more I believe that people tend to vastly underestimate difficulty for Japanese ballplayers to make the transition stateside, and not just on the field. Granted, those players made the choice to ply their trades halfway across globe, but their isolation doesn’t even register to some members of the mainstream media. Instead, the players get ripped for not fitting in, for not speaking the language, and for not adhering to customs that are completely foreign to them in the most literal sense of the word. It makes one appreciate the rarity of an Ichiro Suzuki or a Hideki Matsui coming over and not only surviving but thriving. What they’ve done is a hell of a lot harder than it looks.

Unfortunately, not every player who comes over is as well-equipped to face the obstacles that baseball in the U.S. presents. Not only must the loneliness and isolation be almost unbearable at times, but the intense pressure to live up to two occasionally opposing ideals of success — the emphasis on winning at nearly all costs over here, the emphasis on honor and respect over there — must be maddening. Even the mundanity can be a strain. A friend who at the moment is in her first year of working overseas noted, "Every day I walk out my door is intense. Every interaction is huge. It gets easier, but it’s still a big deal. I never forget I am in a foreign country."

I wish Hideki Irabu had succeeded as a Yankee. In one of my first trips to Yankee Stadium in 1997, his fourth major league appearance, I sat in the nosebleed seats of the right field upper deck, and watched him get bombed for six runs in two-plus innings by the Mariners. "Even from where we were sitting we could see Joe Torre hand Irabu a ticket to Columbus when he yanked him," I later wrote. Irabu would go on to have better days than that in pinstripes — particularly during that early stretch of the 1998 season — but his time here was generally viewed as a bitter disappointment. I wish he had found someplace else in major league baseball — anyplace else — to succeed, but even more than that, I wish he had found peace instead of succumbing to his inner demons. My deepest condolences go out to those feeling his loss.