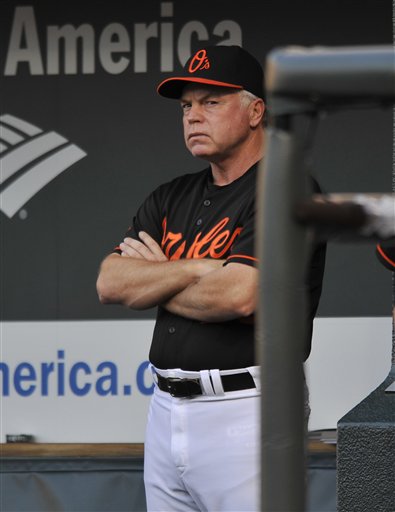 The Orioles have the second-worst third-order winning percentage in baseball coming into this condensed four-game series. Only the Twins have done less to generate wins, though they have somehow out-played their expected .380 winning percentage by a whopping nine wins. In terms of actual record, only the Astros (35-70, .333) have a worse record in all of baseball, and the 'Stros are underplaying their production by about six wins. In their last eight series, the Orioles are 0-7-1, in their last 13 they are 1-11-1, in their last 17 they are 2-14-1. They are 0-6 against the Yankees this season. They are a terrible baseball team.

As was the case when Buck Showalter took over the Orioles last year, the change in their fortunes is once again all about run prevention. The O's remain a slightly below average offensive team, but have been far and away the easiest team to score on in baseball, allowing 5.24 runs per game, exactly a quarter of a run more than the 29th-place Astros. The O's allowed 5.46 runs per game prior to Showalter's arrival last year, but carved nearly two runs off that after his arrival, and much of the pre-season hype, perpetrated by myself among others, focused on their young pitching talent, including a rotation that promised to include prospects Brian Matusz, Zach Britton, Jake Arrieta, and Chris Tillman in addition to second-division ace Jeremy Guthrie. Well, as of this writing, the only of the first four still in the O's rotation is Arrieta, and as you'll see below, July has not been kind to him. Britton and Tillman could return for Saturday's double-header, but there's no guarantee that either will remain.

The Yankees are also welcoming some familiar faces back into the fold. Eric Chavez has been activated and will start at third base in the opener. Rafael Soriano has been activated as well, though word is he'll be used carefully at first. Ivan Nova will start one of the game's in Saturday's double-header (forced by the rainout on April 22), and there seems to be an outside chance that he could win back a rotation spot. Brandon Laird and Steve Garrison have been optioned to make room for the first two. No word yet on how the Yankees will shuffle Nova onto the roster.

Jeremy Guthrie is in his fifth season with the Orioles and has been essentially the exact same pitcher that entire time. His career marks with the O's tell the story: 4.10 ERA (107 ERA+), 5.5 K/9, 2.5 BB/9, 1.2 HR/9. That's too few strikeouts, too many home runs, but a solid overall performance undermined by a bad team that has set his record at 42-62 over those five seasons. In that time, he has made 14 starts against the Yankees, going 3-9 in those games with just two no-decisions, both coming back in 2007. The only surprising thing about Guthrie is that he hasn't faced the Yankees yet this year beyond an appearance in the 15th inning on May 18 that caused him to skip his scheduled start against them the next day. Last year, Guthrie went 0-3 with a 8.64 ERA in three starts against the Yankees.

A.J. Burnett failed to complete the sixth inning in each of his last three starts. On the season he's been almost perfectly average, with a 99 ERA+ and a .500 record. A league-average performance should result in a better record on this Yankee team, but the Yankees haven't been scoring for him (just 4.33 runs per 27 outs). Still, just eight of his 21 starts have been quality, and if he doesn't turn one in tonight, he'll have had none in July. He has turned in back-to-back quality starts just once this season, that was back in his first two starts of May, and he gave up five runs (three unearned) in the first of those two.

Note that only two of the four pitchers have been announced and that exactly which game those pitchers are going to pitch has not been officially announced.

In two starts since admitting, to himself and the media, that he didn't trust his legs, Colon has allowed five runs (just three earned) in 13 1/3 innings with 13 strikeouts against just three walks and no home runs. Both starts were quality, though he only received enough run support for the win in the second. Colon has now turned in three quality starts in five tries since returning from the disabled list and won a game after Independence Day for the first time since his Cy Young season of 2005, though that last stat is as arbitrary and alarming as it is encouraging.

The Orioles' most recent fifth starter was rookie right-hander Mitch Atkins, but he was recently sent down sporting an 8.44 ERA. Heralded left-handed rookie Zach Britton is already scheduled to be called up for this double-header, so it seems unlikely that Baltimore would recall Atkins as well. Guthrie is pitching on Friday. Jake Arrieta is pitching on Monday. Brad Bergesen would be on just one day's rest. Alfredo Simon would be on just two day's. The only other man on the O's 25-man roster to have made a major league start this season is Chris Jakubauskas. However, Jakubauskas's last start was on July 4 and he has a 6.91 ERA in six starts on the season. Chris Tillman has been floated as a possibility for this game, though he, too, is in the minors as of this writing.

Nova and Britton are both rookies who opened the season in the major league rotation and pitched well enough to stay, but were nonetheless demoted earlier this month only to recalled for this double-header, which both are surely hoping is their chance to prove that they belong back in the majors.

What's interesting about these two is that the 23-year-old Britton was considered one of the top pitching prospects in the game, while 24-year-old Nova was considered more of marginal arm that might ultimately wind up in middle relief, but as the season progressed, so did Nova, while Britton, at best, didn't, making Nova the more effective pitcher at the time of their demotions.

In his first ten starts in the majors, Britton went 5-2 with a 2.93 ERA and eight quality starts, including a shutout of the Mariners and a seven-inning outing against the Yankees in which he allowed just one unearned run. In eight starts thereafter, he went 1-5 with a 6.86 ERA and just two more quality starts, one of which saw him allow five total runs (two unearned). A more-than-one-hundred-point inflation in his opponents' average on balls in play contributed to that decline, but Britton clearly wasn't making improvements.

Nova, meanwhile, was. After opening the season with a quality start, a pair of duds, and an unsuccessful relief outing, which collectively saddled him with a 7.62 ERA, Nova went 7-2 with a 3.42 ERA over his last 13 starts, seven of which were quality. When he was demoted to make room for the returning Phil Hughes, he had been out-pitching Burnett for two months, or roughly two-thirds of the season.

Britton was sent to Double-A and, despite dominating in the strike zone, produced middling-to-poor results overall (0-2, 5.40 ERA, 3 HR in 11 2/3 IP and an unspectacular groundball rate). Nova was sent to Triple-A and was very good in his first two starts before leaving his third after just an inning and a third (three of those outs being strikeouts) with a sprained ankle, which it seems has been the primary obstacle to the Yankees announcing his start on Saturday, which as of this writing, they still hadn't done, though Joe Girardi invited us all to read between the lines and figure it out ourselves.

I'm not convinced that Nova is being given an opportunity to win a rotation spot back with this start, but if he comes up and turns in yet another strong outing, how can the Yankees continue to rationalize keeping both Burnett and Hughes, whose return has been far from encouraging on the whole, in place of him?

Arrieta is 1-3 with a 7.18 ERA in July, thanks in large part to the nine home runs he has allowed in his five starts on the month, including two dingers in each of his last four outings. Tillman did squeeze a quality start against the Red Sox into that quintet (7 IP, 3 R, 0 BB, 4 K, but still 2 HR) and is 4-for-4 in quality starts against the Yankees on his career, including two this April. Still, his gopheritis seems like an awful match for this team and this ballpark.

Freddy Garcia, meanwhile, hasn't allowed a single home run in his last eight starts, a span of 53 innings in which he has gone 5-2 with a 2.55 ERA and seven quality starts without a shred of help from luck on balls in play. In his lone start against the O's this season, which came back in April, he threw six scoreless innings and struck out seven.