Share All sharing options for: The Unchased-Away Hughes Blues 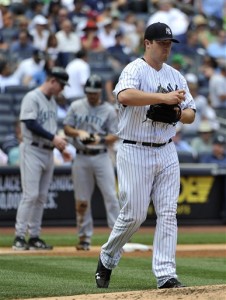 On an afternoon that featured three big deadline-oriented deals and an Ervin Santana no-hitter, Phil Hughes scuffling was not news. On the contrary, it was easy to see from a mile away that the 25-year-old right with the season ERA above 9.00 might be just the pitcher against whom the Mariners might end their 17-game losing streak, particularly with ace Felix Hernandez on the bump to support their own cause.

The 9-2 final score doesn't reflect how well Hughes pitched. He yielded only two runs in six innings and left trailing 2-1; the rest was on the bullpen and the defense, which teamed up to yield seven runs over the final three frames, only three of them earned. The porous D kept forcing Corey Wade, Boone Logan, Luis Ayala and Hector Noesi to get additional outs, as Robinson Cano muffed a potential double play ball, failing to get even one out, and Curtis Granderson gloved but didn't catch a flyball that turned into a three-run triple; he would go onto lose a ninth-inning flyball in the sun, leading to two more runs.

Which isn't to say Hughes dominated the league's most inept offense, not by any stretch of the imagination. He looked crisp in a 1-2-3 first inning, but the rest of his afternoon was a slog, with runners on base in each frame. By the second or third inning, I tweeted a complaint that he was taking so long between pitches that when the game began, Colby Rasmus was a top prospect. In the end, Hughes threw first-pitch strikes to just 14 of 26 hitters, and whiffed just three against a team that came into the day with the league lead (the no-hit Indians would surpass them before the afternoon was out). On the other hand, while he allowed nine hits, seven of them were singles, and none of them left the yard. He got a season-high nine swinging strikes among his 101 pitches, four with the four-seam fastball, five with his new curve.

"Better isn't saying all that much," said Joe Girardi when comparing Hughes' afternoon to last Friday's clinker and suggesting that his command of his fastball and curveball could improve. "I felt like I really executed pitches better early in the count and not as good late, so that’s something that needs to change," said Hughes. "I’d rather be able to execute those pitches when I need them with two strikes."

In four starts since coming off the disabled list, Hughes has now posted a 5.48 ERA while allowing 37 baserunners in 21.1 innings, with a 13/9 K/BB ratio and a .365 BABIP. He's really only had the one bad start in that stretch; in each of the other three, he's allowed just two runs. Nonetheless, it's difficult to envision Girardi confidently penciling him in for a postseason start.

Which is why there's a whole lot riding on the nightcap of Saturday's makeup doubleheader against the Orioles. Officially, Girardi has yet to announce the Yankees' starter, and while Adam Warren was the early favorite to get the call, all signs point to Ivan Nova, who demonstrated that the ankle he rolled on July 19 was sound via a simulated game on Monday. If that's the case, he'll be called up to take the turn, and it's not out of the question that with a strong outing, he could reclaim his spot at Hughes' expense. Here's LoHud's Chad Jennings from Wednesday's pregame notes:

Asked whether Nova’s return could start a competition between Nova and Phil Hughes for a spot in the big league rotation, Girardi’s answer was yes, then it was no.

"There could be," he said. "I’m not going to say that there will be, but we want our guys to compete all the time. We want guys to throw the ball well and earn their spots every time. As far as saying there’s a competition for Phil Hughes’ next start, I’m not saying that."

"That’s how it always is," he said. "That’s how I look at it. You know, if I go out there every time and am not good, there’s obviously going to be consequences from that, so that’s nothing new. I know I have to go out and pitch well, and today was certainly a lot better than last time. And I’ll try to work on some things and build off this outing."

Furthermore, Saturday contest is less than 24 hours before Sunday afternoon's non-waiver trade deadline, and a poor outing could increase the urgency for Brian Cashman to make a deal. The aforementioned Hiroki Kuroda doesn't sound as though he's at all inclined to approve a trade, and reports are mixed as to the team's ongoing interest in Ubaldo Jimenez. Neither of them are slam-dunk solutions, and even less so is another name that popped up on the radar this morning, Erik Bedard.

Calling the Mariners' lefty oft-injured is an understatement; since being traded from the Orioles to the Mariners in February 2008, he's made just 45 starts — 15 apiece in 2008, 2009, and this season — while undergoing shoulder surgery three times, having ordered the all-you-can-eat version of the Deluxe Torn Labrum Combo Platter. When he's available, he's excellent; in those 45 starts, he's posted a 3.15 ERA and 8.8 strikeouts per nine, including 3.00 and 8.5 this season, but he's been on the DL since late June with a knee sprain, and he'll have just the one start, Friday night against the Rays, by which to judge his fitness. The Red Sox, whose rotation is considerably more banged up than the Yankees, are said to be "all over" the fragile southpaw; the two rivals will be sending scouts to the outing. Bedard isn't making much money — $1 million base, with another $6.35 million in unspecified incentive bonuses, on a one-year deal — but he obviously carries the tremendous risk of going kablooey, and if he does, whoever acquires him will be back to square one.

Given that the Yankees essentially know what they have in Nova — an erratic but promising back-of-the-rotation guy — it would have been nice to see what Warren could do, even with the caveat that the reeling Orioles aren't exactly playoff caliber competition. Nonetheless, it's extremely difficult to imagine a player who has yet to debut for the Yankees taking a turn in October. This last pre-deadline moment is about taking inventory of what's already in the chain stores, not what's en route to the warehouse. Such is life in the Bronx.