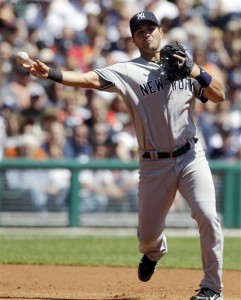 Eric Chavez is on his way back to the big league roster. (AP)

As you’d expect when the AL's second-best team faces off with one on a 15-game losing streak, the Yankees pounded the Mariners 10-3 on Monday night, waiting out a two-hour rain delay to do so. Mark Texiera's towering two-run homer in the first inning started the festivities, and after exchanging runs in the third inning — the Yanks' coming via a Derek Jeter home run, just his third extra-base hit since the day he collected his 3,000th hit — the Yankees took advantage of a pair of errors to plate five runs while sending nine men to the plate in a seemingly endless fourth inning.

Even though it was the series opener, the disinterested Mariners played as though they had a plane to catch, leaving little doubt as to why they've got the league's worst offense; from the fourth through the sixth inning, Freddy Garcia retired nine out of 10 Mariner hitters using just 25 pitches. Garcia wound up throwing a season-high 7.2 innings, delivering his 10th quality start in his last 12 tries, and walking less than three hitters for the 13th time in 15 starts. Would that A.J. Burnett and Phil Hughes, both blessed with superior stuff, could pound the strike zone like he does. Yes, it's true: Sweaty Freddy has been rock steady.

Down at the bottom of the lineup, Eduardo Nunez had a 2-for-4 night, driving in the first run of the fourth. It was Nunez's third multi-hit game out of four, and the fifth start out of six that he's collected a base hit. Nonetheless, he's hitting just .260/.315/.320 in the two weeks since Alex Rodriguez went on the disabled list, and his overall line is now down to .273/.318/.400, for a .260 True Average — not horrendous for a backup middle infielder by any stretch, but nothing to write home about either. He's made up for his cooling-off by being steadier afield, making just one error in his last nine games. So there's that.

Aside from the game, the Yankees got good news on the third base front on Monday. First off, Rodriguez's recovery from his July 11 arthroscopic knee surgery is progressing as planned; he's riding a stationary bike and doing pool exercises as well. Brian Cashman told ESPN that the slugger is on target to return in the second week of August, which would place him closer to the short end of the four-to-six week window the Yankees initially anticipated for his absence.

Meanwhile, Eric Chavez could be activated as soon as today. After starting the season strong and, for a change, healthy, he hit .303/.410/.424 in 39 plate appearances off the bench through May 5, but has been sidelined by a broken foot since, suffering other maladies while laid up as well. Joe Girardi sounds as though he's not going to let the 33-year-old injure himself with bench splinters. "[Y]ou could very well see him in there right away when we get him," he told reporters. Chavez's activation would likely mean the return of Brandon Laird to Scranton/Wilkes-Barre; the 23-year-old has gotten a total of nine plate appearances in four games, reaching base twice via walk and once via base hit.

Chavez's return crosses one minor area of need off the Yankees' shopping list as the trade deadline approaches. If he stays healthy and functional, he'll keep Ramiro Pena off the 25-man roster once the latter heals from his appendectomy, and that's only a good thing.