Share All sharing options for: Series Preview: Yankees vs. Mariners 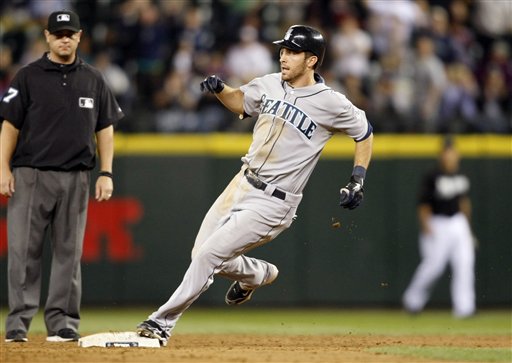 Thanks to Dustin Ackley's hot start to his major league career, the Mariners still have one player with offensive value on their roster. One. (AP)

The Mariners have the worst offense in baseball. They have scored just 3.24 runs per game this season. To put that in context, Felix Hernandez has a 3.47 ERA, so a league-average offense facing King Felix has a better chance of scoring than the Mariners do facing a league-average pitcher.

When these two teams last met, sophomore first baseman Justin Smoak was the M's best hitter, but over the last month he has hit just .112/.182/.146. Rookie second baseman Dustin Ackley (.297/.347/.505) has helped fill that void, but the problem is that Smoak wasn't just the Mariners' best hitter, he was their only hitter. Ichiro looks finished at .268/.315/.318. Catcher Miguel Olivo leads the team in home runs and RBIs, but is hitting just .223/.261/.389. Gold Glove center fielder Franklin Gutierrez has a 28 OPS+. None of these things are typos.

Much like the A's, the M's try to make up for that utter lack of offense with outstanding pitching, but while Hernandez and rookie Michael Piñeda were a great one-two punch earlier in the season, Piñeda has hit the skids of late, giving up five or more runs in four of his last five starts (which I look a bit more closely at in this week's Rookie of the Year Awards Watch over at SI.com). Erik Bedard was finally contributing again, but is currently on the disabled list with a sprained knee. Meanwhile, you can't win if you don't score, and while no Mariners starter has an ERA over 3.99, only Piñeda has a winning record, and his just dropped to 8-7 after a drubbing at the hands of the Red Sox on Sunday.

That loss was the Mariners' 15th in a row. Their last win took ten innings against the A's on July 5. The all-time record for consecutive losses is 23, set by the 1961 Phillies. I don't think the Mariners will get there, but the fact that I'm even discussing it tells you all you need to know about this team.

This is a fitting matchup of similarly skilled pitchers. Vargas is a soft-tossing lefty flyballer with a good changeup who doesn't strike many men out, but doesn't hurt himself with walks, tends to hang out around league average in the aggregate, but is often dominant. Vargas actually leads the American League in shutouts with three (tied with James Shields and Derek Holland) and threw nine scoreless innings in a fourth game this season as well only to see the Mariners lose 2-1 with all of the scoring taking place in the 12th inning. Eleven of Vargas's 20 starts this season have been quality, and seven of those have seen him go at least seven innings with no more than two runs allowed, but he has also allowed five or more runs seven times, including in his previous start against the Yankees (3 IP, 6 R, 4 BB) and each of his last two starts (combined: 9 IP, 18 H, 10 R, 3 HR, 6 BB, 3 K).

Garcia, the veteran and former Mariner, has been better with 12 quality starts in 17 turns (albeit just three with seven innings pitched and two or less runs allowed and none with more than seven frames regardless of what he allowed) and just one five-run stinker. Garcia peeled off five straight quality starts from June into July, and last time out he rebounded from the stinker that stopped that streak (his lone five run game of the season) with 6 2/3 scoreless innings against the Rays, striking out seven against no walks along the way.

The contrast between Fister's record and his ERA tells you a lot about the Mariners' offense. Fister's last win came on May 30. Since then, he has made five quality starts (in nine tries), including three consecutive starts of eight or more innings in which he allowed just one run each time out. Despite all of that solid pitching, he has gone 0-6 since that last win. On the season, Fister has received just 2.43 runs of support per 27 outs, which suggests that Fister is unlikely to notice a difference facing Sabathia. Another soft-tosser who doesn't get many strikeouts, the right-handed Fister works off a pair of high-80s fastball with a changeup, slider, and curve, the last of which misses the most bats.

Hughes took a big step forward two starts ago, then he took two steps back in his last, failing to last long enough to pick up a win in a game in which the Yankees spotted him 14 early runs. Hughes' velocity was down, he only got batters to swing and miss at four of his 98 pitches, he walked four men against just three strikeouts and gave up seven runs in 4 1/3 innings. It was bad all over.

Hernandez is getting fewer ground balls this year and having, perhaps partially as a result, less luck on balls in play. That explains the slight uptick in his ERA and relative inconsistency (he comes into this start having just allowed six runs to the Red Sox), but in most other ways, he's still the same pitcher. When the Yankees last faced him, they drew five walks, hit two home runs (by Robinson Cano and Mark Teixeira), scored four runs, and lost 5-4 in 12 innings with Mariano Rivera taking the loss.