Kicking the Tires on Kuroda

Share All sharing options for: Kicking the Tires on Kuroda 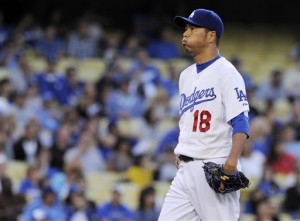 Hiroki Kuroda has endured a tough season in Los Angeles, but he's the top starting pitcher on the market as the trade deadline approaches. (AP)

There's no Cliff Lee to be had at this year's trade deadline, but as sure as God made little green apples, the Yankees have taken an interest in the best starting pitcher available on the market. Fox Sports' Ken Rosenthal tweets that the Yankees are among the suitors for the Dodgers' Hiroki Kuroda.

Don't judge the 36-year-old Japanese righty by this year's 6-12 won-loss record, as he's gotten worse run support (2.9 per game) than any qualified NL starter save for ex-Yankee Dustin Moseley. Kuroda has posted a 3.19 ERA with good peripherals (1.0 HR/9, 2.3 BB/9, 6.9 K/9) while making 13 quality starts out of 20 and averaging 6.4 innings per start. He's a groundballer, albeit one whose groundball-to-flyball ratio has dropped from last year's representative 1.59 to a career-low 1.20 this year, and a few extra balls have left the yard; his home run rate in three previous seasons stateside was just 0.7. He's no slouch, though. Here's what Cliff had to say about him last November, before he signed a one-year, $12 million deal :

Bucking the conventional wisdom that Japanese pitchers tend to struggle in and beyond their third year in the majors, Kuroda had his strongest major league season in 2010, posting a 3.39 ERA (113 ERA+), 1.16 WHIP, and 3.31 K/BB in 31 starts for the Dodgers. His strikeout rate has increased each of the last two seasons, and his strong ground-ball rate has held steady. Overall, he has posted a 3.60 ERA, 1.18 WHIP, and 3.18 K/BB in three major league seasons and was excellent in two of his three postseason starts (though he was absolutely lit up in the third). The concerns about Kuroda are his age, he’ll be 36 in February, and the fact that he has assembled his numbers in a pitching-friendly ballpark in the weaker league.

And here's what I said in this year's Baseball Prospectus annual:

Health-wise, the 2009 season treated Kuroda like the gorilla treated the suitcase in those American Tourister commercials from 30 years ago, but he survived the pounding to rebound with his strongest stateside season. Relying less on his four-seam fastball and more on his slider and splitter, Kuroda got more swings and misses than ever before; his 10.7-percent swinging-strike rate ranked ninth in the majors, and his strikeout rate rose substantially. He did it without compromising his pinpoint control; his unintentional walk rate and strikeout-to-unintentional-walk ratio were both second in the league behind those of Roy Halladay. With his three-year, $35.3 million deal having expired, the Dodgers re-upped for what they hope will be more of the same via a one-year, $12-million deal that defers $2 million apiece to 2012 and 2013.

Bottom line: there many pitchers on the market who don't represent significant upgrades to what the Yankees have among Bartolo Colon (who pitched well against the A's on Sunday), Freddy Garcia, Phil Hughes (who laid an egg on Friday, unable to withstand the 100-degree heat and the waiting inherent in receiving 14 runs of support over two innings) and Ivan Nova. Kuroda's on more solid footing than any of those guys, in that he's now got three-and-a-half years of stateside success under his belt, and the injuries which dogged his 2009 (oblique, batted ball-induced concussion, neck pain) have abated. He's not making a ton of money, but he does have a full no-trade clause, not to mention plenty of suitors, which means it will take a package of decent prospects to acquire him. The Tigers are said to be the favorites, and the Rangers and Red Sox are also interested. The Dodgers don't absolutely need to trade him; ESPN Los Angeles's Tony Jackson reports that "the only reason he is being shopped is as a courtesy to him, to possibly give him the chance to pitch for a contending club." The pitcher himself is playing it coy when it comes to the prospect of being traded, saying, "I really haven't thought about it."

The bottom line is that Kuroda's not a must-have for the Yankees, but he's certainly somebody you'd feel more comfortable as a number three starter in a postseason series than Hughes or A.J. Burnett. The Dodgers have needs at many positions, including catcher, and in Ned Colletti, they don't have the sharpest knife in the drawer when it comes to general managers. Some of Colletti's woes stem from the circumstance of the Dodgers' divorce-related financial situation; going the other direction, the team has often chosen to trade higher-value prospects in midseason deals rather than take on more salary. The Yankees' willingness to take on cash could be a key part of a deal.

• I didn't see a ton of the Yankees'-A's series this weekend, which was probably for the best; watching an opposition that came in hitting .225/.291/.321 on the road nick and cut their way to a total of 38 hits over three games was a surefire recipe for frustration, if my Twitter feed was any judge. That said, it was certainly nice to see old friend Hideki Matsui have some success. After an 0-for-3 on Friday night, he went 2-for-5 on Saturday with a home run — a greeting to lefty Boone Logan, when Joe Girardi absolutely should have known better than to bother — in the A's 4-3 win, then came back with a 5-for-5 Sunday that included two doubles. Down in the dumps with the rest of the A's offense, Godzilla hasn't been so fierce this season, hitting .237/.313/.373 even with his big weekend. His recent performance — .328/.418/.500 in July — may be enough to entice some team to liberate him from Oakland at the trade deadline.

• Speaking of ex-Yankee trade deadline acquisition candidates, Jason Giambi is generating a bit of heat. Limited to pinch-hitting, DHing in interleague games, and backing up Todd Helton in a year where the Rockies' first baseman has been relatively healthy, Giambi's gotten just 111 plate appearance. He's made them count, hitting .263/.360/.632 with 10 homers, and he's drawn raves for his clubhouse presence as well. He's drawing interest mainly as a designated hitter, but ESPN's Buster Olney has speculated that he'd be a fit for the suddenly competitive Pirates.

• Speaking of ex-Yankees in general, Chien-Ming Wang's return to the majors is apparently imminent. He'll start for the Nationals against the Mets on Friday night, his first major league start since July 2009, when he was felled by a torn shoulder capsule. Now property of the Nationals, Wang was roughed up by the Yankees' Scranton/Wilkes-Barre outfit on Sunday, but his 30-day rehab assignment is at its end, and he's pitched reasonably well, posting a 17/4 K/BB ratio and a 3.14 ERA in six starts totaling 28.2 innings. After discouraging early readings, he's occasionally reached the low 90s with his fastball. He'll need to keep his velo high enough to get the necessary movement on his pitches, otherwise it could end badly. Here's pulling for him.

• Part of the reason I didn't see Sunday's game was because it coincided with the Hall of Fame induction ceremony featuring Pat Gillick, Roberto Alomar and Bert Blyleven, three individuals whose elections I've stumped for — particularly the latter, whose cause I supported through 10 ballots. A Baseball Prospectus reader asked if the double play combination of Alomar and Cal Ripken had a case for the best ever among those in the Hall; I looked into it, ruled them out (Ripken shifted to third base after one season together in the middle infield) and wrote up the 10 best enshrined duos — with both players in the Hall of Fame — according to JAWS, along with two honorable mentions. Two Yankee pairs — Joe Gordon/Phil Rizzuto, and Tony Lazzerri/Joe Sewell — are on the list, whose surprises include the fact that the top tandem according to the admitteldy arbitrary method I utilized includes Gordon during his days in Cleveland, after he was traded by the Yankees. Check it out.