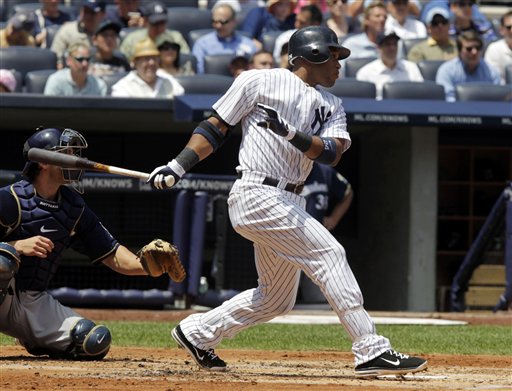 With Roberto Alomar being inducted into the Baseball Hall of Fame this weekend, I took a look at Alomar's place among the greatest second basemen in the history of the game for SI.com. Doing so provoked my interest about the place Robinson Cano is carving out for himself in that group. Cano didn't dent the lists I compiled for that article, but he nonetheless merited mention as one of the young second basemen in the game with the potential to do so.

With that in mind, I thought I'd take the time here to see, first where Cano stacks up among Yankee second baseman, and then, perhaps, try to project what kind of impact he could ultimately have on that all-time list.

To begin with, here are the Yankees' all-time leaders in games played at second base:

In my SI.com piece, I used Baseball-Reference's Wins Above Replacement (shortened to bWAR) as my total-value statistic of choice for two reasons 1) it factors in baserunning, which FanGraphs' WAR (fWAR) doesn't, and 2) it is calculated the same for a player in 2011 as a player in 1911, as opposed to fWAR, which uses Ultimate Zone Rating as its defensive component back to 2002, but TotalZone prior to that, and Baseball Prospectus's WARP (Wins Above Replacement Player), which only goes back to 1950. Here, then, are the career bWAR leaders from the list above, limiting that accounting to seasons in which the player was both a Yankee and played second base more than any other position:

As for peak value, I'll again defer to the method I used for the Alomar piece, in which I took the average bWAR of the player's five best seasons. Doing that here, again using only the seasons in which the player was both a Yankee and primarily a second baseman, gives us this:

However, Cano's fifth-best season per bWAR is this season, which is not yet complete. Cano has thus far been worth 2.8 wins above replacement this season per bWAR, but if we pro-rate that over the remainder of the season, we get a season total of 4.7 bWAR, the second-best mark of his career. Using that figure instead, his peak score improves to 5.16 bWAR, though that's still not enough to move him ahead of Randolph on the above list.

Randolph's peak was higher than Cano's has been thus far for three reasons: Randolph, particularly at his peak, was an elite defender, one who graded out better than Cano in the range-based TotalZone, an on-base machine, and a solid basestealer. In those top five seasons, Randolph was worth 5.6 wins in the field per Baseball-Reference's defensive WAR, posted a .391 OBP, and stole 147 bases (just shy of 30 a year) at an 80 percent success rate. By comparison, in his five best overall seasons, Cano has been worth 3.3 wins in the field, has posted a .360 OBP in a more offense-friendly era and environment, and has stolen just 23 bases (less than five per season) at a poor 58 percent success rate.

Of course, Cano does other things better than Randolph, hitting for power being the most obvious, but for those who remember Willie only as a slick-fielding singles-hitter, it's worth remembering that what he did had a great deal of value, particularly given his era and position.

So, Cano is clearly the fourth-best second baseman in Yankee history, but thus far has no claim to be anything more than that. That's no shame given that two of the men ahead of him, Gordon and Lazzeri, are in the Hall of Fame. That said, no Yankee second baseman made my SI.com list of the top ten second basemen of all time, which looked like this:

When taking his their entire careers into account, beyond just their Yankee years, Randolph ranked ninth in career value at second base by my accounting, and Gordon ranked ninth in peak value, but Randolph's peak wasn't high enough, and Gordon's career (two years of which were lost to World War II) wasn't long enough to put either in the top 10. Gordon, whose last major league season was 1950 and who passed away in 1978, didn't get into the Hall of Fame until 2009. As Steve recently wrote in praising Randolph as an overlooked gem of a ballplayer over at Baseball Prospectus, Randolph's career WARP of 47.5 "ranks ninth among all second basemen from 1950 to present but third behind contemporaries Lou Whitaker (56.5) and Grich (54.3)—underrated players themselves. If they haven’t received proper credit, what chance does Willie have?" Whitaker and Grich both made my top ten above, but, again, both stand out as the only non-Hall of Famers on that list, an oversight that doesn't seem likely to be corrected any time soon.

I don't much expect Randolph will ever get into the Hall of Fame, nor do I particularly think he should. As Jay's JAWS system suggests, he ultimately falls short of the Hall's standard. Given that, it seems likely that Cano will ultimately fall short as well. Cano is 28 this season. At the end of his age-28 season, Alomar had accumulated 36.2 bWAR. Cano, even with our pro-rated full 2011 figure, would only have 28.8 bWAR. Still, two of Alomar's best seasons came in his early thirties when he was with the Indians, and Cano does seem to have matured greatly as a ballplayer over the past few seasons. A Hall of Fame bid certainly isn't out of the question for Cano, but rather than expect him to be something he likely isn't, we should instead enjoy him for what he is, which is nothing less than one of the four best second baseman in the 109-year history of the New York Yankees.