Share All sharing options for: Series Preview: Yankees vs. A's

When I think about this season's A's, my mind goes to a pair of tweets that were sent by A's fan Ken Arneson, the founder of Baseball Toaster and author of the late, lamented Catfish Stew. Two weeks ago, Arneson tweeted:

Watching [Jemile] Weeks make stuff happen every night while the rest of the lineup does bupkus really makes it clear how awful these guys have been.

When the whole lineup does nothing, there's always the possibility the pitcher was good. Weeks regularly proves, nope it's us, not them. 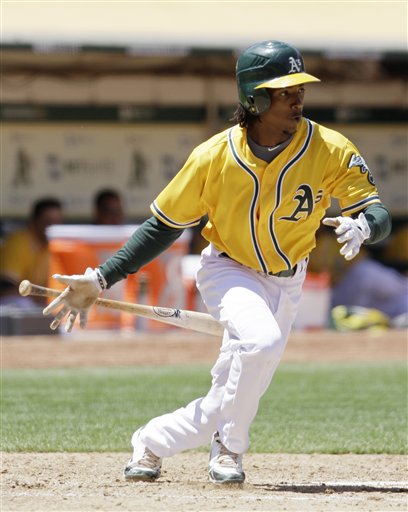 Weeks, the A's rookie second baseman and younger brother of Brewers' All-Star second sacker Rickie, has hit .308/.342/.406 since being called up and installed at the keystone in early June. Ignoring playing time, that line makes him the A's best hitter this season. In fact, of every batter to come to the plate for Oakland this season, just three have an OPS+ above league average, and of those three, only Josh Willingham has had anything close to a full-season, hitting .240/.315/.427 (105 OPS+) but losing time to a disabled list stint from which he just returned two weeks ago. The third man on that list is third baseman Scott Sizemore, the former second base prospect of the Tigers who was acquired for former Blue Jays lefty David Purcey in late May and has had even fewer plate appearances than Weeks.

The A's quite simply can't hit. On the season, only the Mariners and Padres have scored fewer runs per game than the A's 3.52, and only Seattle has a lower team OPS+ than the A's 80 (which is based on a .237/.304/.340 team batting line). Having Weeks and Sizemore in the lineup hasn't improved things all that much; the A's have scored just 3.75 runs per game in July.

This is old news for all three of those teams. All three play in pitchers' parks, all three have good pitching and close to no hitting. Off the three, the A's have scored the most runs this season, but have also allowed the most. That last is due to a major league high 55 unearned runs (the A's actually lead the majors with a 124 ERA+ and have the third-lowest unadjusted ERA in the game behind those of the Phillies and Giants). The A's aren't a terrible defensive team by the standards of park-adjusted defensive efficiency, but they are second in the majors in errors to the Cubs with 77 (by comparison, the Yankees have made 63, 50 if you leave out Eduardo Nuñez).

If all of that makes the A's sound unimpressive, well, they are. The A's won six in a row in mid June, but since then they've gone 9-15, have won consecutive games just once, and are 2-5-1 in their last eight series. When the Yankees swung through Oakland on their west coast trip at the end of May, they swept the A's, outscoring them 19-5 in three games, and the A's are 1-9 in the Bronx over the past two seasons (that is, the entire history of the new stadium).

Jay covered the improvements Hughes made in his last start, with emphasis on his new and improved curveball, so I won't add much to that here other than to say that, to me, the key stat is that Hughes got opposing hitters to swing and miss eight times in that game, or once every ten pitches. By comparison, he had made a hitter swing and miss just nine times in his previous four starts combined, or once every 32 2/3 pitches. That's a very encouraging sign that gives one hope that Hughes can build of what was his first quality start and first win of the season.

Cahill went 6-1 with a 1.79 ERA in his first ten starts this season, but then went 0-5 with a 7.43 in the next five, including a loss to the Yankees on May 30 in which he walked five men and gave up four runs in 6 2/3 innings. Cahill has recovered in his last six starts (2.57 ERA), but that mid-season skid shows how susceptible he can be to luck on balls in play. In those first ten starts, his BABIP was .259, in the last six it has been .250, but in between it was .333. Cahill is a good young pitcher, but he doesn't strike out very many men. He typically compensates for that with a strong groundball rate, but groundball pitchers can't put extra men on base because sometimes those balls find holes, and Cahill's control has abandoned him at times this season (his 3.8 BB/9 is a career worst). He's also 0-3 with a 9.72 ERA in three career starts against the Yankees, the other two of which came last year.

Harden was considered a stud as a young prospect with the A's a decade ago, but nine seasons into his major league career, he has managed to stay healthy enough to throw 100 innings just four times and has qualified for the ERA title only once. After two and a half years with the Cubs and Rangers, Harden returned to the A's this year at age 29 for more of the same. He has managed just three starts this year, the first of which didn't come until July 1. So far, his two home starts have been impressive quality outings (combined 13 IP, 8 H, 5 R, 2 BB, 15 K), but his one road start, against the Rangers in Texas, was a dud (5 IP, 5 R, 2 K). He has also allowed four home runs in 18 innings (or two per nine innings, roughly double league average). It's no surprise that he's not the same pitcher he once was given how many of his injuries have involved his pitching shoulder and the surrounding muscles. His fastball is now in the low 90s, and he has thrown just four changeups, formerly his second-best pitch, in his three starts this season per TexasLeaguers.com. Instead he's four-seamer/slider with the odd splitter or change. It's not nothing, but it's a shadow of what he once promised to be.

Burnett hasn't completed six innings since July 4 and his last quality start was in June. He hasn't been awful. In fact, he's been pretty solid for a fifth starter. The only problem is he's not the Yankees' fifth starter. Still, he has turned in a quality start in all four of his games against the A's as a Yankee.

Colon's second and third start after his return from the DL:

Colon's first and fourth start after his return from the DL:

The story is that Colon, who was on the disabled list with a hamstring injury, was being tentative about his legs in the middle two starts and wasn't finishing his pitches, but having 'fessed up to that, he put those concerns aside and turned in a strong, nine-strikeout outing against the Rays his last time out. The only problem with that is his six shutout innings in his first start back don't really fit the narrative. Still, there's reason to believe that he bottom line above is closer to the real Colon, while the middle line was additionally plagued with bad luck. Still, Colon's concerns were not unfounded, given his recent history, his season seems more likely to end with an injury than a playoff start.

Gonzalez, a 25-year-old lefty who was drafted in the first supplemental round by the White Sox in 2004 and traded three times before making his major league debut in 2008, has emerged as the A's ace this season, largely due to his excellent strikeout rate of roughly one per inning. Gonzalez throws a pair of fastballs in the low to mid 90s and compliments them with a curve and change that are a good ten miles per hour slower. He doesn't have a large platoon split, and while he's been dominant at home (7-2, 1.88 ERA, 9.8 K/9), he remains a good pitcher on the road (3.00 ERA, 7.7 K/9). He will get wild on occasion, and has walked 4.1 men per nine innings on the season, but unlike Cahill, he can get out of those jams with strike three. Over his last six starts, Gonzalez has had one bad outing that included four unearned runs and three home runs allowed in Texas, and five excellent ones that saw him allow four runs combined and no homers across 35 innings while striking out 42. Those five starts did come against weaker competition (the Royals, Mets, Marlins, Diamondbacks, and Angels) and four came in Oakland, but that seems like nitpicking.