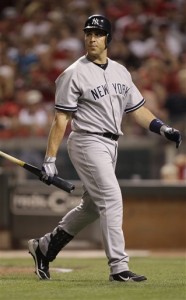 Should Mark Teixeira use more of the whole field? (AP)

Earlier this week, I wrote of Mark Teixeira's falling batting average, and particularly his falling batting average on balls in play. I used some PITCH f/x-based spray charts to illustrate the case that from both sides of the plate, the slugger was hitting the ball to the opposite field less often than he had prior to coming to the Yankees, making it easier to justify the kind of extreme infield shifts most teams use against similar left-handed sluggers, and to rob Teixeira of several hits per year. Last night, while I was poking around on the Baseball-Reference.com website and watching the Yanks not score off James Shields, I discovered that within their splits section they now have data that can help quantify that erosion.

To keep this simple, let's start by considering Teixeira's performance as a lefthanded hitter, split into his pre-Yankees years (2003-2008, with the Rangers, Braves and Angels) and his Yankee ones (2009 onward):

As a group, lefty hitters pull the ball about 26-28 percent of the time, at least within the years I've checked for this. Teixeira pulls it more often than most lefties, in other words, and he's more successful, putting up monster numbers in that context. Still, his performance when pulling the ball has fallen off somewhat since coming to the Yankees, with his BABIP declining 61 points, but he's offset that by averaging more total bases per hit than before (2.3 to 2.1).

Before he came to the Yankees, Teixeira used to have some success when he went up the middle, particularly in the power department, but since coming to the Yankees, his performance has declined steeply, to the point that he's more or less league average, swapping around 30 points of batting average for 30 points of slugging percentage. His performance going oppo, which was already somewhat sickly, has gotten even sicklier, to the point that maybe Babe Ruth should drop by its bedside and promise to hit it a home run.

While the distribution of balls may not look as though it has changed significantly between Teixiera's pre-Yankees career and his Yankees one, note the ratio between pulled and opposite field balls. Through 2008, Teixeira hit 2.4 to the pull side for every ball to the opposite field. Since then, the ratio is up to 3.8, much more skewed to the pull side.

Now, the question is why we should want a hitter to hit fewer balls to his strong side, where he's been more successful, and where balls in general more often go for hits, and more to his weak side, where both he and his fellow hitters are much less likely to collect hits. As I look at this, I'm not sure my answer for that is as strong as I thought it was a few days ago, when I had my hands on less data, but let's start by noting that the opposite field sample is small. Eighty-nine PA in two and a half seasons — his 2009-2011 total of opposite-field balls — is a minuscule split, where sample size is absolutely an issue, and even the 285 he hit there before donning pinstripes is a small sample.

It's tough to say whether his substandard performance to that side is the result of skill or fluke; it looks to me like it could be more of the latter, because when we check his numbers from the righthand side, the basic trends are the same until we get to the last lines:

Batting righty, Teixeira's opposite-field numbers for the Yankees are quite good, but the problem is that he does it so rarely; he hits lefty more than twice as often as he hits righty, and 43 balls in play is about half as much as the number he has going the opposite way from the other side of the plate. It's almost nothing.

But the line there does point out that it's not a given that he must be such a weak kitten when he hits to the opposite side. If he were able to do so with more frequency — and again, from this side of the plate the ratio of pull to oppo has increased drastically during his time in pinstripes, from 2.6 to 3.7 — the chances are that his numbers would regress more towards the league average; in other words, they would improve considerably. If that were the case, he would lessen the incentive for teams to deploy an extreme shift against him, and his performance to his pull side might improve as well.

That's the theory, at least. On a Friday afternoon as my air conditioner strains to combat the triple-digit heat, and the cocktail hour nears, I don't know where the break-even point would be. Should we want him to hit 15 percent of balls to the opposite-field side? 20 percent? Or should we rather see a hitter stick with what he does best, what he does far better than most, and concentrate on that relatively lethal ability to pull the ball while hoping that the rest sorts itself out?

If I had to guess, I'd think that getting back to that 15 percent rate of going to the opposite field as he did prior to coming to the Yankees would be closer to optimal — that's what got him his $180 million contract, after all. But that's just a guess, and there's a whole lot here that's unaddressed, namely Teixeira's ability to hit outside pitches, with which he can better go opposite field, more effectively. We have to hope the pros – Teixeira and hitting Kevin Long, most notably — can sort it out with more certainty and conviction.