Time to Go Long for Teixeira?

Share All sharing options for: Time to Go Long for Teixeira? 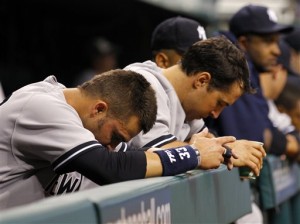 On Monday night, the Yankees snatched victory from the jaws of defeat, scoring three runs over the final two innings to beat the Rays 5-4. On Tuesday night, the tables turned, with the Rays taking advantage of the Yankees' shoddy defense and some home-field cooking to score two seventh-inning runs and win 3-2. The Rays' dilapidated Tropicana Dome home played a role in both games if not both outcomes; play was delayed for 18 minutes on Monday night after a bank of lights lost power following a lightning strike, while on Tuesday, Curtis Granderson lost pinch-hitter Justin Ruggiano's fly ball in the roof backdrop, loading the bases immediately after Bartolo Colon's departure. Immediately after that, Boone Logan botched a potential double-play comebacker that allowed the Rays to tie the game, then Johnny Damon's sac fly provided the go-ahead run. The Yankees, who had stranded four runners in scoring position to that point while scoring just two runs, would not get so good a chance again. So it goes.

That doesn't mean there weren't positives to take from the game. Colon showed no signs of the post-hamstring injury tentativeness he showed during last Thursday's abbreviated outing, tossing 105 pitches over 6.1 innings while striking out a season-high nine hitters. Brett Gardner continued his recent hot streak with two hits and two steals; he's batting .365/.431/.462 this month and is 10-for-10 in swiping bags (it's almost like he should be leading off or something). Robinson Cano creamed a Jeremy Hellickson pitch for a two-run homer, the Yankees' first longball in five games. And Mark Teixeira collected two hits for the first time since July 9, not to mention his first extra-base hit since July 3.

It's been that kind of month for Teixeira, as though his typically slow April simply got lost in the mail but finally arrived in July. Even with Tuesday's outburst, he's hitting just .237/.318/.288 this month, and hasn't homered since June 30, dropping his overall line down to .242/.345/.499. Including his less-than-stellar June, he's batting a woeful .222/.314/.444 since the end of May, with a .208 BABIP. For all of his power — he's still tied with Curtis Granderson for second in the league in home runs at 25 despite his dry month — his .226 BABIP overall is the majors' third-lowest among batting title qualifiers, ranking among Replacement-Level Killers like Dan Uggla, Alex Rios and Adam Dunn.

When Teixeira bats lefthanded, teams shift an extra infielder to the right side, similar to how they've shifted for lefty sluggers like Jason Giambi, Jim Thome, David Ortiz and Prince Fielder in recent years, robbing them of base hits. That's one reason why his BABIP from that side is 46 points lower for his career (.329 to .283) and 57 points lower this year (.267 to .210, the latter of which would represent a career low). What doesn't seem to be helping is that Teixiera appears to be getting more pull-conscious from both sides of the plate since he has come to town. Using the spray charts at TexasLeaguers.com, you can eyeball his 2008 (pre-Yankee) and 2011 batted ball distributions (this works better if you click on the image to enlarge it): 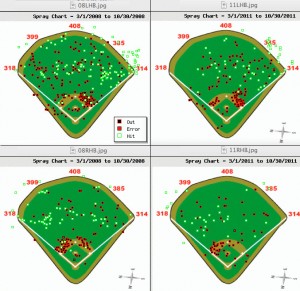 ...because he certainly isn't collecting as many as he used to. (TexasLeaguers.com)

Granted, the sample size for the latter isn't as big, but it certainly looks as though a huge chunk of balls — both hits and outs — is missing from the left field corner and left-center gap in his 2011 performance batting lefty. Likewise for the righthanded performance — there's significant bunch of hits and outs missing from the right field corner and gap. Teixeira's not going opposite field as much from either side of the plate, and it's costing him; his .303 True Average is good overall, but it ranks ninth among first base regulars, behind luminaries like Casey Kotchman and Michael Morse. He's being paid more like Adrian Gonzalez (.331) and Miguel Cabrera (.349), and absent a sick note, he should be producing much closer to their level than to guys just living year-to-year.

The first baseman admitted recently that he hasn't been as comfortable at the plate lately, but it doesn't sound as though he's immersed in any Curtis Granderson-level cagework with hitting coach Kevin Long at the moment. Perhaps he should be.