How Twitchy Should a Lineup Card Be?

Share All sharing options for: How Twitchy Should a Lineup Card Be? 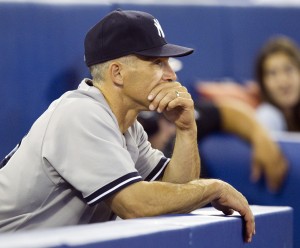 In the grand scheme of things, the difference between the best and worst batting order is very small. If the difference between leading off a pitcher and batting Jose Bautista ninth is only three wins a year, then batting Babe Ruth third and Lou Gehrig fourth instead of the other way around isn’t going to matter very much in the grand scheme of things, nor will Derek Jeter first and Brett Gardner eighth. That is not the same thing as validating the idea or saying it’s smart. It isn’t. The best you can say about it is that it’s not as self-defeating as it would appear to be at first glance. When it comes to managing a baseball team, "not hurting" is not equivalent to "helping."

My purpose is not to excoriate Girardi again, something I’ve been doing a lot lately. I would rather just observe who is hitting and who is not and then ask a question I’m not certain of the answer to: how reactive should a manager be to short-term trends in offense? Should he shake things up in response to slumps, or just keep the players parked where they are? Consider the Yankees in June and July, or roughly the last seven weeks:

That’s last night’s batting order. Is it the right one? Keep in mind, even the last month-plus doesn’t tell us everything. It doesn’t show what a little island these seemingly good numbers by Posada rest on. It doesn’t tell us how we seriously we should take Nunez’s numbers because his major-league track-record is so brief, nor anything about Jeter’s decline, Gardner’s volatility, and so on. Yet, we know those things and so does Girardi. The question that remains is how reactive to those things should he be, how obligated is he to take into consideration new information and revise thinking that derives from thoughts he developed back in March?

Myown answer would be that a manager is obligated to rethink things and optimize his batting order, if not in response to daily or weekly trends (that way lies madness; you would shuffle after every 0-for-4 or 3-for-4) then to the larger ones. What we see above represents a quarter of the season, and it has real weight, and the bigger picture has weight as well. If you’re a manager, do you keep hoping for a Jeter revival beyond the 3000-hit game or a Posada comeback that lasts longer than two weeks, or do you say, "I can’t do that anymore, I have to acknowledge new realities?"

If the manager did acknowledge those realities, he might garner an extra win somewhere, might change the odd 3-2 loss into a 4-3 win. That might not change the outcome of a season, but then again, it might.