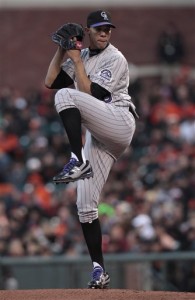 Steve has touched on the Ubaldo Jimenez rumors couple of times already, but what he hasn't passed along is the full scope of what the Rockies are asking for. On Sunday night, SI.com's Jon Heyman tweeted that the Rox want Jesus Montero, Manuel Banuelos, Dellin Betances and — but wait, after asking for the top three prospects in the system, there's still more! — Ivan Nova. Heyman reports that the Yankees won't trade any of the latter three in a deal with Montero, so you can exhale now.

Jimenez isn't as good as his early 2010 run made him appear, and he doesn't have nearly the track record of, say, Cliff Lee. The Rockies' grounds for requesting such a ransom owe to his team-friendly contract; he's making just $2.8 million this year, with a guarantee of $4.2 million in 2012, and no-brainer-if-healthy options totaling $13.75 million for 2013-2014. Jimenez has the power to void the latter year ($8 million) if he's traded, but even so, this is hardly even A.J. Burnett money.

He's fairly desirable pitcher in that he misses plenty of bats (8.4 per nine from 2009 onward) with a solid groundball rate (though falling from 55 percent to 50 percent to 48 percent over that timespan) that has kept his home run rate at a more-than-acceptable 0.51 per nine, particularly since he pitches half his games in Colorado. In fact, only Josh Johnson (0.46) and C.J. Wilson (0.48) have done better among the 77 pitchers with at least 400 innings in that span. His control is merely acceptable, as he's walked 3.6 over that timeframe (13th highest out of that group), for a 2.3 strikeout-to-walk ratio. If those four-walk Burnett games bother you, well, you won't like this table of pitchers who've had the most such starts over the past three seasons:

Jimenez has more four-walk starts than every pitcher except one, more even than Burnett. He's stuck around to provide innings in those starts, but even relative to that high-walk group, he hasn't been particularly effective; compare that ERA to sporadically available teammate Jorge de la Rosa's mark, and note that the difference between his 4.66 ERA and his 3.79 FIP in such starts is the third-highest among that group, behind only Lincecum and Romero. That's a sequencing issue, basically; those extra walks are leading to more runs than expected under such circumstances because they're poorly timed. Even with his durability — until a finger problem derailed him earlier this season, he hadn't missed a start since entering the rotation in 2007 — Jimenez does not appear to be a particularly strong prescription for overcoming the Burnett blues, particularly at the expense of multiple blue-chip prospects.

Man on the Mend

It's been a rough season for Eric Chavez, who is becoming the Yankees' version of Bumblebee Man, the poor schlimazl whom every calamity befalls. Having come east from Oakland in search of a fresh start following a litany of lower back, shoulder, elbow and neck injuries that pushed the six-time Gold Glove winner into five stints on the 60-day disabled list in four years, he carved out a roster spot in spring training, and got off to a strong start, hitting .303/.410/.424 in 39 plate appearances off the bench through May 5. Since then, he's been derailed not only by a fractured left foot but also kidney stones and back woes, all of which added up to another stint on the 60-day DL.

The good news is that Chavez is finally slated to begin a rehab assignment; he'll DH at Class-A Tampa tonight, and hopefully ease back into playing defense as well. Though it's doubtful Joe Girardi would turn to him as an everyday option given his history, he could give the Yankees another alternative to Eduardo Nunez and the just-recalled Brandon Laird at the hot corner in Alex Rodriguez's absence.