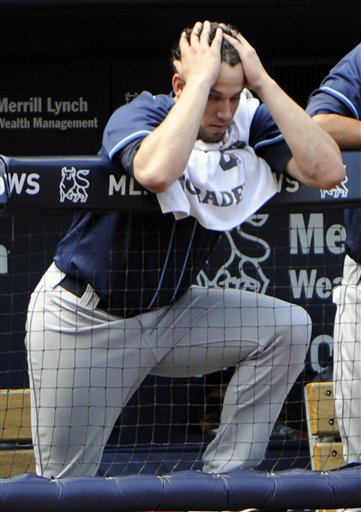 James Shields hung his head over a single unearned run the last time these two teams met, but he'll get a rematch with CC Sabathia on Thursday. (AP)

Since sweeping the lowly Astros in late June, the Rays have won just one of five series, going 6-9 over that stretch and falling seven games behind the AL East leading Red Sox, their largest deficit of the season. Included in that stretch was a series loss to the Yankees in the Bronx that included Derek Jeter's remarkable milestone game and a captivating, and for the Rays, painful 1-0 pitchers duel that saw James Shields and CC Sabathia both go the distance and the only run score on a pair of Rays errors. Those two pitchers will meet again in the finale of this four-game set.

Speaking of painful 1-0 losses, the Rays enter tonight's game coming off a 16-inning, 5-hour 44-minute-long game against the Red Sox which they lost 1-0 at about 1:50 am this morning thanks to a leadoff walk in the 16th and a two-out Dustin Pedroia RBI single.

Joe Maddon used his entire eight-man bullpen in that game, though only Brandon Gomes, who also pitched on Saturday, threw more than 25 pitches. However, Juan Cruz, despite not appearing to suffer an injury in the game, has landed on the disabled list with a groin strain today, paving the way for the major league debut of small Venezuelan lefty starting prospect Alex Torres, who came over in the Scott Kazmir trade and will go to the major league bullpen for the time being, and the man who gave up that 16th-inning run, Adam Russell, was just designated for assignment to make room for tonight's starter, rookie Alex Cobb (more on him below).

The Yankees made a roster move today as well, putting Ramiro Peña on the disabled list following an appendectomy and calling up corner infielder Brandon Laird. I had called for Laird to replace Alex Rodriguez on the roster coming out of the All-Star break, and though he got here out of necessity rather than invention (Laird is literally the last healthy infielder on the Yankees' 40-man roster), it's still encouraging that he's up. Now the question becomes, will Joe Girardi give him a chance to wrestle the third base job away from Eduardo Nuñez. I'm guessing he won't, and I'm not convinced that Laird would perform well enough to leapfrog Nuñez if he did get the chance, but I still think he deserves that opportunity and that the Yankees could benefit from giving it to him.

Starting in place of the injured Wade Davis, 23-year-old righty Alex Cobb last appeared in the majors a month ago, but has been dominating in his Triple-A debut this season (5-1, 1.87 ERA, 9.4 K/9, 4.38 K/BB) and was one out shy of four quality starts during an early June stint in the major league rotation (2-0, 2.55 ERA). Cobb throws a pair of low-90s fastballs, one an effective sinker, but his best pitches are an excellent changeup and a big curveball. At Triple-A, he has struck out more than a man per inning and gotten nearly two thirds of his outs on the ground. If he can come close to those rates in the majors he'll be a force, which makes it all the more frightening that he's far from the Rays' best pitching prospect.

In six starts since his last disaster, Burnett has posted a 3.69 ERA and struck out 9.2 men per nine innings. However, only two of those six starts were quality, and the Yankees only managed to win half of those games. That last has as much to do with the offense as Burnett, as the Yankee scored just five total runs in those three losses, one of them a 1-0 loss to Carlos Carrasco and the Indians. In his last start, Burnett struck out nine Rays, but gave up three runs on home runs to Matt Joyce and B.J. Upton and was pulled after 5 2/3 innings and just 89 pitches when he walked Upton ahead of Joyce while nursing a one-run lead.

Though he didn't come out and blame his poor performance in his last two starts on it, Colon admitted after his disaster outing in Toronto on Thursday that he's nervous about re-injuring his hamstring and, as a result, is not finishing off his pitches, robbing them of the movement that made them so hard to hit prior to the injury. Colon might as well be injured if he's going to pitch like he did in his last two starts. His last may have been a perfect storm of bad pitching and bad breaks, but he gave up five runs in 5 2/3 innings in the turn before that. The problem is that it's easier for Colon to say he's going to pitch without regard for his leg than it is for him to actually do it. This start will be the test. If he's still pitching tentatively and getting hit hard, the Yankees might as well throw him back on the disabled list and call up Ivan Nova.

Hellickson was skipped when the Yankees and Rays were rained out in the Bronx the Friday before the All-Star break. As a result, he hasn't pitched since July 3 and will thus enter this start on 15 day's rest. That time off benefits the Rays in their effort to keep Hellickson's innings down in this, his first full season in the major league rotation (his 155 2/3 innings between the majors and minors last year were a career high), but it's unclear if it will benefit them in this game. The only time Hellickson has pitched on more than five day's rest this season, he threw five scoreless innings against the Orioles, but a) that was the Orioles and b) he walked five men against just four strikeouts in that game. As for the rest of Hellickson's season, here's what I wrote about him in anticipation of that rained-out start:

Hellickson entered the season as the favorite for the American League Rookie of the Year award and, while his ERA above suggests he has largely lived up to that hype, he’s been as much lucky as good in the first half. The scouting report on Hellickson coming into the season was that he had a low-90s fastball that could spike to 95 and a killer changeup, but pitched like a finesse pitcher, pounding the strike zone and intelligently mixing in a two-seamer, cutter, and curve. The results were lots of strikeouts (more than one per inning in his minor league career) and lots of ground balls. Thus far this season, however, his fastball has sat down around 90 miles per hour, the cutter and curve are being used less and less to the point that he’s almost become a two-pitch pitcher, his strikeout rate has been below league average (5.9 K/9), and he’s been a rather extreme fly-ball pitcher, inducing roughly twice as many flies as grounders. Instead of dominating his opponents, he’s surviving them thanks largely to an unsustainable .225 batting average on balls in play.

Garcia had a bad outing against the Blue Jays, snapping a streak of five straight quality starts. The Yankees would happily take one dud every six turns going forward. Garcia still hasn't allowed a home run since June 7. He last faced the Rays last May, at the Trop, and held them to two runs over seven innings while striking out seven.

By comparison, David Price has just one quality start in his last three turns and has allowed five home runs over that short span, one of them being Derek Jeter's 3,000th hit. Price gave up four runs in five innings in that game and walked as many men as he struck out (three), making it his worst outing since April. He was better against the Red Sox in his first post-break start, but not dramatically so.

These two pitchers brought the first half of the season to a rousing conclusion by dueling to a 1-0 Yankee win that saw both go the distance. To put that in context, the last time a Yankee pitcher threw a shutout in a game in which the opposing pitcher also went the distance was April 27, 1993, when Jimmy Key shutout the Angels in Anaheim and the Yankees built a five-plank picket fence against Chuck Finley, with four of those runs coming via solo homers, two of them by Mike Gallego. The last time the Yankees won such a game 1-0 was July 20, 1992, when Ron Darling, then with the A's, gave up a third-inning run on two-out doubles by Mel Hall and Don Mattingly, and the Yankee pitcher who shutout Oakland was swing-man Shawn Hillegas, who was released and signed with Oakland barely more than a month later. The last time a Yankee threw a shutout in the Bronx in a game in which his mound opponent also went the distance was May 22, 1988, when John Candelaria beat Storm Davis and the A's 2-0 with the help of a two-run Jack Clark home run.

That helps underline how well these two have been pitching of late, though if you want more, read my latest Awards Watch at SI.com, as they're both among the top five candidates for the AL Cy Young award right now.