A Hughes They Can Use

Share All sharing options for: A Hughes They Can Use 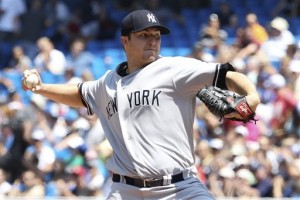 Phil Hughes threw his best start of the season on Sunday against the Blue Jays. (AP)

Phil Hughes put together his best start of the season on Sunday, enabling the Yankees to leave Canada with a split of their four-game series against the Blue Jays. Pitching on 10 days' rest due to the All-Star break and some schedule-juggling, the 25-year-old righty tossed six innings, surrendering four hits, two walks, and two runs. Most promisingly, he struck out a season-high five hitters, matching the total he'd whiffed in his first four starts and 15.1 innings.

Hughes got swings and misses on eight of his 80 pitches, one less than he'd gotten in his previous four starts combined; six of them came on four-seam fastballs, one on his curve, and one on his cutter. For comparison's sake, last year he got swings and misses on 8.9 percent of his pitches overall, a number that didn't change much from the early part of the season when he was particularly successful (10 starts, 2.71 ERA, 9.0 K/9, 9.2 percent swinging strikes) to the subsequent grind (18 starts plus two relief appearances, 5.15 ERA, 6.4 K/9, 8.7 percent swinging strikes). In his previous start, he had gotten just two swings-and-misses in 87 pitches. So at least in that department, he's back up to where he needs to be.

Much of the credit for Hughes' start-to-start improvement has been given to his new power curveball. From the Wall Street Journal's Dan Barbarisi:

He comes back with a power curveball, a faster and harder pitch with a different break, to replace the slower, looping curve he has used for years...

Hughes has been tinkering with changes to the curveball for some time, but he only began working on the curve in earnest after his last start, which came in Cleveland before the All-Star break.

Yankee manager Joe Girardi and pitching coach Larry Rothschild were impressed with what they saw of the curve in side sessions.

"It's sharper and it's harder," Girardi said. "And there's more velocity to it."
Hughes wanted the curveball to be in the upper 70s, rather than in the low-to-mid 70s as it has been the past two seasons. Sunday, it was, clocking in at 77-78 much of the time, and fooling the Blue Jays hitters.

Comparing the PITCH f/x numbers at Texas Leaguers between last year's curve and Sunday's, the new pitch came in as slightly slower (75.0 MPH compared to 75.8 MPH), but it was significantly faster than the 73.3 MPH he averaged through his first four starts of this season. What's particularly different about it is the amount of horizontal and vertical break; the new one breaks significantly less in both planes ("sharper"), which allows him to keep it in the strike zone more often, rather than trying to get hitters to chase it off the plate. Eyeballing the release point graphs, he seems to be letting go slightly closer to the center of the plate, which when combined with the increased velocity may be amplifying the perceived velocity. Batters fouled off or put into play 11 of his 25 curves, collecting just a lone double (Travis Snider's fourth-inning shot) for their trouble.

Hughes retired eight of the final nine hitters he faced, on a total of 22 pitches; the last six outs required just 11 pitches. He probably could have gone another inning — he pleaded with Girardi and Rothschild to do so — but the manager pulled him due to the heat and the long top half of the seventh, when the Yankees increased their lead from 5-2 to 6-2 with a pair of singles and a sacrifice fly. It's far too early to say he's back to where he was in the first half of last season, but in a series where both Bartolo Colon and Freddy Garcia got roughed up, he was more than workable, giving the Yankees and himself something to build upon.