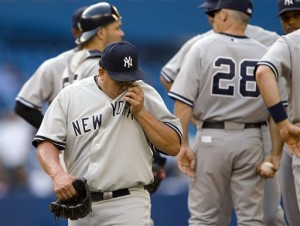 A particularly tough day at the office for Bartolo Colon doesn't necessarily mean the fun of his comeback is over. (AP)

The early and late innings of Thursday night's loss to the Blue Jays were cringeworthy, but before everyone starts to shovel dirt on the Bartolo Colon era, it should be pointed out what a perfect storm it took to create his dreadful line for the night: 0.2 innings, 6 hits, 8 runs (3 earned), 2 walks, 0 strikeouts. Consider:

• Bad luck in the form of Brett Gardner losing Eric Thames' fly ball in the lights as he dove, turning it into a one-out double instead of the first inning's second out.
• The questionable strike zone of home plate umpire Angel Hernandez, long reviled as one of the majors' worst.*
• Eduardo Nunez's 374th error of the season, on J.P. Arencibia's two-out grounder, which opened the floodgates and helped turn a three-run inning into an eight-run one.
• Infield singles on a pair of swinging bunts against a pitcher who doesn't trust his recently injured hamstring; Colon had already hesitated instead of running hard to cover first base on Adam Lind's groundout. Though the pitcher said he wasn't feeling any pain, he admitted he was tentative: "It’s affecting me a little bit because I’m not pitching the same way I’m pitching (when I’m) aggressive... I have been a little bit afraid. I’ve been thinking about it… I think it’s why my sinker is not sinking the way it’s supposed to is because I’ve been thinking about my leg too much."
• Artificial turf, and Canadian artificial turf at that. Do you know what a terrible exchange rate American grass has against Canadian artificial turf?
• Blue Jays baserunners allegedly stealing signs, which Russell Martin didn't pick up on until the fourth inning. "You move your head one way it's a fastball, you move your head the other way it's a slider," he said. Not that there's anything wrong with that. "It's up to us to catch it and change the signs," said Martin. "I'm not blaming them for anything. ... It's one of those things you don't really talk about, but it's part of baseball. It's always been."

It all adds up to a good ol' fashion thumping, which can happen from time to time even to a good team. None of this is to make excuses otherwise; Lord knows the Yankees win plenty of games because they're able to take advantage of their opponents' mistakes. The point is that it took a whole lot of things that weren't necessarily in Colon's control for the game to spiral out of control. While it may be that he's not quite fit to pitch after returning from the disabled list with relative rapidity for a 38-year-old in no great shape, that doesn't necessitate the end of his magic carpet ride. That said, with Ivan Nova looming at Triple-A, Colon certainly has to pitch better than he has in his past two outings in order to maintain his hold on a rotation spot.

*Worth noting was the fact that none other than Executive Vice President for Baseball Operations Joe Torre just broke up the umpiring crew that included Hernandez and the similarly loathed Cowboy Joe West. The West/Hernandez crew had been under fire over a recent Angels-Tigers game featuring four ejections. The only sad part about it is that the two umpires deserve each other.