Share All sharing options for: Sergio Mitre, Will You Please Go Now! 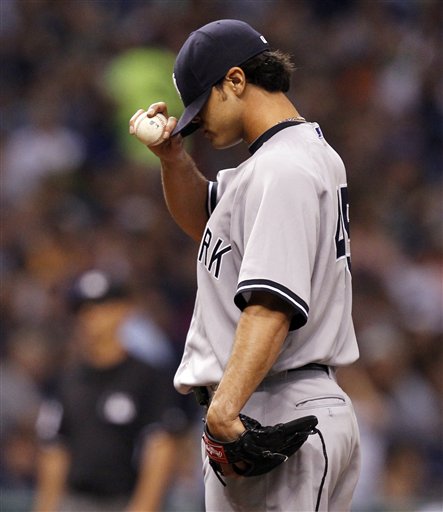 I don' t know about you, but I've seen enough of Sergio Mitre 2.0 (and I'm fairly certain most of you have too). Mitre has made just three appearances since rejoining the Yankees, but he has allowed roughly twice as many runs as innings pitched in each one of them. The result has been a 14.53 ERA and this aggregate line: 4 1/3 IP, 7 H, 8 R, 7 ER, 0 HR, 4 BB, 2 K. Four and a third innings isn't enough to judge anyone by, but the Yankees have seen this movie before. Mitre posted a 6.79 ERA in 51 2/3 innings for New York in 2009, and while he shaved nearly three and a half runs off that last year, he did so in part due to a .228 BABIP.

The Yankees have absolutely no need for Mitre, in part because Hector Noesi is proving to be a solid right-handed long-relief option. Yes, Noesi gave up two runs Thursday night, but he also struck out four in 3 1/3 innings against just one walk, has a solid 3.45 ERA on the season, and seven of his 12 appearances have been scoreless (I'm including inherited runners in that accounting). Over his last nine innings pitched, Noesi has struck out 11 against just two walks and no home runs while allowing just those two runs from last night (and one inherited runner) to score.

The Yankees pulled a nifty trick by turning Mitre into Chris Dickerson at the end of spring training, but opening the second half with Mitre on the major league roster and Dickerson stashed at Triple-A seems like a clear sign of regression. I suspect the Yankees just might have seen enough of Mitre with last night's appearance, but even if the team isn't ready to cut bait just yet, the time has come to toss this chum overboard. The Yankees have a superior replacement at the ready in Triple-A in George Kontos. Kontos, whom I lobbied for a month ago, has averaged more than two innings per appearance (two of them four-inning spot starts) while posting a 2.26 ERA, a 3.47 K/BB, and striking out more than a man per inning. He could be half that good in the majors and still be a big improvement on Mitre.

Kontos would need to be added to the 40-man roster, but the Yankees have the space, and not just because they'd be dropping Mitre. The 40-man roster currently has just 39 players because the Yankees released Brian Gordon last Friday. Unlike his acquisition, Gordon's release flew under the radar, but it wasn't simply a case of the Yankees deciding they had overrated the 32-year-old converted outfielder. Gordon's two starts for the Yankees weren't terribly impressive, but he went right back to dominating in Triple-A, striking out seven against no walks in five scoreless innings in his debut for Scranton. Then, mere days later, he asked for his release so that he could go to play for the SK Wyverns, the defending champions of Korea Professional Baseball.

So, that's how that story ends, at least for the Yankees. I suppose the only real takeaway is that Gordon has decided that whatever career he's going to have has to happen now. The only reason he became available to the Yankees was that he opted out of his minor league deal with the Phillies, and once it became clear to him that the Yankees didn' t have room for him in the major leagues (in part because they were carrying Mitre), he decided he'd rather be a major leaguer on the other side of the world than a minor leaguer here at home. That's the decision of a man who can envision his ability to earn a top salary at his chosen profession slipping away, something the Yankees clearly didn't have time to suss out before they fitted Gordon for pinstripes.

Given my opposition to Gordon's acquisition and his underwhelming performance for the Yankees, I certainly don't see his departure as a loss for the Yankees (who got some cash out of the deal from the Wyverns), and given how well Noesi has pitched of late, I still feel justified in my outrage over Gordon getting the opportunity to make those starts in Noesi's place. Fortunately, Noesi has continued to take advantage of the opportunities he has been given. Perhaps that lost opportunity will ultimately prove to be just a blip in his development into a legitimate major league starter. Perhaps Noesi wouldn't have amounted to much with or without that chance, and the Yankees were right to try to add another quality arm (whether or not Gordon really fit that description) to their depth chart. Ultimately, there is no "I told you so" opportunity there for either side of the Gordon debate. As for Mitre, I'm still searching for some one to take the "pro" side, but I'm guessing they all made off in their Zumble Zays after Thursday night's game.