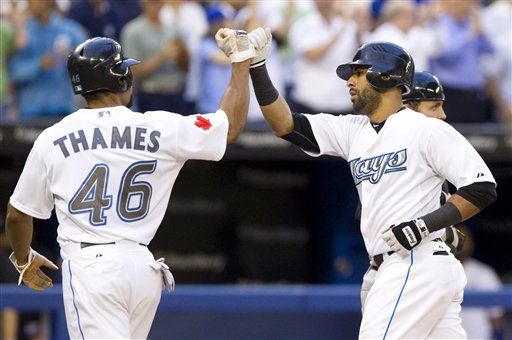 Jose Bautista has some support in the Jays' lineup these days, but Toronto is still only half of a good team. (AP)

The Blue Jays are a .500 team, good enough to take a series from a team like the Yankees, but not so good that the Yankees shouldn't feel bad about it when it happens. Thus far, the Yankees hold a 5-3 advantage in the season series with Toronto, but they have only out-scored the Jays by three runs over those eight games.

Over the last few weeks, the Jays seem to have finally assembled the lineup they likely envisioned coming into the season by getting first baseman Adam Lind back from the disabled list, calling up outfielder Travis Snider, installing rookie Eric Thames in left, shifting Jose Bautista to third base, and ridding themselves of Jayson Nix and Juan Rivera.

Then there's Bautista. For the second straight season, Mr. Universe took a vacation from home run hitting in June. Last year, he homered in just two games in June, though both were two-homer games giving him four on the month. This year, he homered just once in a 22-game stretch from May 19 to June 21, but again finished June with four homers on the month. Since the calendar flipped to July, however, he's gone back to his Babe Ruth impression, hitting .395/.455/1.000 with seven home runs in ten games and nine of his 15 hits going for extra bases. Given that performance, Joe Girardi should keep the intentional walk in mind when Joey Bats comes up in a big spot, though with Lind having returned to give Bautista some protection, the IBB isn't as easy a decision as it was in May.

Add in leadoff man Yunel Escobar, who has been the third-best shorstop in baseball this season according to WARP and has hit .405/.479/.595 over the last 11 games, and the top four in the Toronto lineup (Escobar, Thames, Bautista, and Lind) make for a solid quartet, with Snider lurking in the seven spot.

Unfortunately, those five are significantly undermined by the other four men in the Jays' lineup (second baseman Aaron Hill, rookie catcher J.P. Arencibia, DH Edwin Encarnacion, and center fielder Rajai Davis), none of whom has an on-base percentage above .290. Those four have combined to hit .238/.278/.377 in 1,116 plate appearnaces this season, which is a statistic every MVP voter should be aware of before they dismiss Bautista because his team didn't contend.

Bautista shouldn' t be blamed for that quartet (or Nix, Rivera, or Corey Patterson), nor should he be blamed for the pitching. The Toronto bullpen has slipped from it's early-season heights and is now second in the American League in blown saves with a lower save percentage than the one team that outranks them, the Angels. Four of those blown saves belong to current closer Frank Francisco, and one of those came against the Yankees back in May (see below for details). The Jays' starters, meanwhile, have compiled the third-worst rotation ERA in the AL, out-ranking only the Orioles and Royals. Ricky Romero is good, but his team has undermined him to the tune of a 6-10 record. Brandon Morrow is talented, but can't seem to put it all together. Prospect Kyle Drabek pitched his way back to the minors, and the other three are really just filler of varying quality. In this four-game set, the Yankees will see every Toronto starter but big lefty Brett Cecil, so I'll let the matchup analysis explain the rest, but no matter how you slice it, the Jays don't seem like much more, or much less, than a .500 team.

Colon has made two starts since coming off the disabled list, the first quite good, the last quite bad (which also describes his two starts against the Blue Jays this season). Colon has had a few duds this season, but what was unusual about his last start was that he walked four men and struck out just one, making it his only start this season in which his strikeouts didn't outnumber his walks. Colon hasn't had consecutive non-quality starts all season (making him the anti-A.J. Burnett), so there's no reason for panic, but that K/BB ratio, which has been his strength all season, bears watching.

Jo-Jo Reyes got some attention earlier this year when he tied a major league record by going 28 starts without a win, a streak that dated back to 2008. The Yankees helped him to number-28 by torching him in the Bronx in late May. He then broke the streak with a complete-game win against the Indians his next time out. Since then, he has gone back to being a nondescript replacement-level starter, going 3-3 with a 5.22 ERA.

Garcia has been fantastic over his last five starts, all of which have been quality. Over that stretch, he has posted a 1.87 ERA, 1.04 WHIP, and 3.00 K/9, and hasn't allowed a single home run. He's not a different pitcher. He's still getting fly balls with high-80s junk and strikeout out next to no one (just two Ks in 13 innings over his last two start, albeit against no walks). He's just on a nice little roll.

Brandon Morrow is really good at striking hitters out (10.6 K/9 this season, 10.1 K/9 career), and has reduced both his walk and home run rates in each of the last two seasons (to 3.6 BB/9 and 0.5 HR/9 this year). He throws in the mid 90s with a nasty slider (and shows a splitter and curve). However, at 26, in his fifth major league season but just his second full season as a starter, he's still struggling with consistency and has seen his ERA rise in each of the last two seasons despite his improvements elsewhere. He's been better over his last five starts (four of them quality, all of them Blue Jays wins) going 3-0 with a 2.94 ERA, though luck on balls in play has helped there (.247 BABIP). He has yet to face the Yankees this season, but faced them four times last year. The first of those four outings was dominant. The next three each saw him surrender five runs in progressively shorter outings.

CC in his last four starts: 4-0, 0.28 ERA, 0.88 WHIP, 11.9 K/9, 7.00 K/BB, 0 HR. Over that span he has averaged just shy of eight innings per start, allowed just one run total, and brings a 23 2/3-inning scoreless streak into Saturday's start. Sabathia completed his only start against the Jays this year, surviving four early runs and being rewarded with a 5-4 walkoff win courtesy of a two-out Mark Teixeira single off Frank Francisco.

A southpaw with a reverse split thanks to his outstanding changeup, the 26-year-old Romero is the Jays' ace. He had a nice ten-start run from mid-May into July (2.02 ERA, average of nearly 7 2/3 innings per start, nine of the ten being quality), but ended the first half with a dud in Boston. In two starts against the Yankees this season, Romero has allowed just three runs in 13 innings. However, the more recent of those two starts was the Sabathia complete game described above.

The good news from Phil Hughes' first start after a three month stint on the disabled list was that his velocity was up (he averaged 91.5 miles per hour on his four seamer per TexasLeaguers.com), he used all four of his pitches (even if he only threw six changeups), and he settled down after a rough first inning, working around a single in the second, third, and fourth, and working out of his own hitless jam (two hit batsmen and a walk) in the fifth. The bad news is that he only made a batter swing and miss twice in 87 pitches, and an inability to miss bats was one of the symptoms that put him on the DL to begin with back in April. Still, that last start gave him something to grow on, and likely shook off a lot of rust and butterflies. Unfortunately, the Jays may not be the best team for him to try to grow against. Three of Hughes' four starts against Toronto last year were disasters and his season ERA against the Jays was 7.29, thanks in large part to the seven home runs he allowed in 21 innings.

Primarily a reliever and spot-starter throughout his career with the Brewers, Villanueva emerged from the Jays' bullpen to make a spot start in place of the injured Jesse Litsch the last time these two teams met. He threw five efficient (75 pitches) and effective (2 H, 1 R, 1 BB, 5 K) innings in that start and has been in the rotation ever since going 4-1 with a 3.67 ERA in nine starts. Sunday's start will be his tenth, a career high. Villanueva is nothing special. Think Freddy Garcia: a flyball righty with a solid assortment of pitches, all of which he throws in the 80s (save for his 75 mph curve), who doesn't strike out many men, but doesn' t hurt himself with walks either. The biggest difference between the two is age (Villanueva is 27) and experience (he has made 36 major league starts to Garcia's 317). Like Garcia, Villanueva has a streak of five straight quality starts coming into this series, having posted a 2.84 ERA, averaged 6 1/3 innings per start, and allowed just one home run over those five outings.