Have You Checked the Lost and Found?

Share All sharing options for: Have You Checked the Lost and Found? 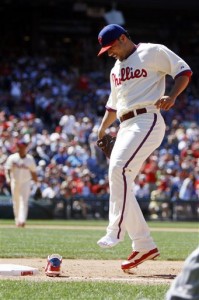 Links from hither and yon detailing the whereabouts of players you scarcely knew were missing:

• According to ESPN's Buster Olney, the Yankees have signed lefty reliever J.C. Romero, a 35-year-old veteran who's spent time with the Twins, Angels, Red Sox and Phillies in his 13-season career, and who was currently toiling for the Nationals' Triple-A club in Syracuse until exercising a contractual out clause.

Once upon a time, Romero ranked among the best LOOGYs in the game, but prior to the 2009 season, he was suspended 50 games for having tested positive for androstenedione. He's never really been the same since; in parts of three seasons, he's unintentionally walked 45 hitters while striking out just 50 in 69.2 innings, a ghastly ratio, and his 3.49 ERA in that span conceals the fact that he allowed 15 of 52 inherited runners to score. A lot of those walks appear to be the result of pitching around righties to get to lefties, but aside from those, he's been equally effective against both sides in that span, yielding a .233/.346/.316 line to same-side hitters and .231/.419/.331 to opposite-side hitters.

Neither of those is much to write home about once you consider the free passes, but he provides some mild bit of insurance if Boone Logan decides to run off and join the circus. Logan has been throwing the ball well lately; since May 11, he's whiffed 15 while walking just five in 13.1 innings — yeah, that's a small sample — while allowing just one out of 17 inherited runners to score.

• According to the New York Post's George King, Greg Golson will join the roster, taking the spot of Alex Rodriguez. The move is a headscratcher, since Golson's an outfielder and A-Rod obviously an infielder; with Andruw Jones * already on the 25-man roster, the Yankees appear to be covered as far as spare flychasers go, even if they do have some concerns about Nick Swisher's sore right quad. With Eduardo Nunez expected to get most of the reps at the hot corner in A-Rod's absence, one can surmise Golson is merely around as a late-inning pinch-running option, but he'll never replace Homer Bush in our hearts.

*Shortly after publishing this, I learned that Dickerson was optioned to Scranton when Derek Jeter came off the disabled list. I plead "traveling in Europe at the time" and thank Moshe Mandel from the Yankee Analysts for the correction.

• Mark Prior threw in a game situation on Wednesday, lasting two innings for the Gulf Coast Yankees and allowing one hit and one unearned run while throwing 24 pitches. It was his first appearance since April 18; he's been dealing with a groin strain since then. At this rate, he'll be ready to join the big club's bullpen by 2017. The ESPN New York article also notes that Rafael Soriano threw 25 pitches in a batting practice session, that Pedro Feliciano has resumed a light throwing program (presumably hurling incandescent bulbs off a half-mound), and that Damaso Marte is throwing off a bulllpen mound in between breaks to count his money and polish his 2009 World Series ring. Don't hold your breath on any of these guys; the Tooth Fairy is likely to show up in the Bronx first.

• At least we finally know why the Yankees keep Sergio Mitre around. According to the Wall Street Journal's Daniel Barbarisi, who conducted an informal poll of 18 Yankees, Mitre was the overwhelming favorite to be by his teammates' sides in a brawl. Not CC Sabathia, not Russell Martin, but Sergio Mitre. Why?

Mitre explained that he grew up on the streets of Tijuana, Mexico, where street fighting was an unavoidable fact of life.

"Long story short, I grew up fighting. My dad got tired of me coming home, shirt ripped, always bloody. So he put me into martial arts—Chinese Kempo, boxing, wrestling. I have a full, well-rounded education," Mitre said.

Mitre says once he began learning—he trained for six years and competed in tournaments—nobody wanted to fight him anymore.

So now you know. Check out the Yankees' opinions of their teammates on such pressing matters as loudest on the team plane, longest primping post-game, best-dressed, and toughest to beat in arm wrestling. Good for a giggle.