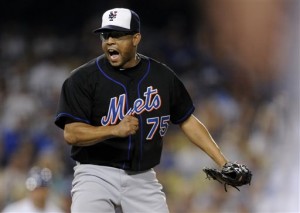 Yankee fans won't have to worry about Francisco Rodriguez bringing his act to the Bronx. (AP)

Yankees fans wary of other GMs bearing trade deadline-type gifts can breathe somewhat easier. The All-Star Game had barely ended when the Brewers announced that they had acquired Mets closer Francisco Rodriguez for a pair of players to be named later, thereby sticking a sock in the mouths of those clamoring for Brian Cashman to acquire him. Hell, it sounds as though K-Rod's new agent, Scott Boras, was taken aback as well, since the Brewers weren't one of the 10 teams on his no-trade list, and since with John Axford in tow they don't need their new acquisition to close, thereby risking the triggering his odious $17.5 million option for 2012 with another 21 games finished.

Boras, who just became Rodriguez's agent in recent days, made a show of trying to ward off potential trade partners; prior to the deal, he warned, "Closers don't make good setup men. Does anyone want an unhappy setup man in their clubhouse?" This is of course, moronic, an insult to the intelligence of anyone who understands baseball, to say nothing of that of Rodriguez's new employers. The idea that a closer is imbued with special superhuman qualities that allow him to seal the deal by getting the final three outs of a game is itself pretty silly, though the conduct of general managers who pay garden variety closers upwards of $10 million per year to do the job suggests there's still a sucker born often enough to keep such a notion alive

That said magician, who almost certainly at some point in his career had to work his way to the back the bullpen by pitching the seventh or eighth inning in support of another closer, would somehow NOT be able to channel his skills and his intensity towards getting outs outside the service of a save is even more absurd, and we are all dumber for having heard them. That an agent would double down on such a statement by willingly playing the "potential clubhouse cancer" card on behalf of his controversial client, who last August was suspended without pay by the Mets after tearing ligaments in his thumb in a fracas with his girlfriend's father, is even more irksome, as it suggests out-and-out unprofessional conduct if the team doesn't bend to Rodriguez's will and install him as closer. Scott Boras is smart and usually very, very good at what he does, but right now he looks like a blithering idiot, and it's quite fun to see him get pwned in this deal's aftermath. Alas, this will probably work out to Boras' benefit anyway, since Rodriguez should be a free agent at season's end, putting his new agent in line for a hefty commission.

Aside from the fact that taking on a player who has rankled them both as an Angel (twice a key member of teams that eliminated the Yankees from the posteason) and as a Met (for postgame antics which drew the ire of Brian Bruney) would have been rather awkward — Armando Benitez's three-week stay in pinstripes still drives some to drink — the Yankees already have an overpaid closer-turned-setup man in Rafael Soriano, who's currently rehabbing his way back from an elbow injury at the Yankees' complex in Tampa; he has thrown two batting practice sessions in recent days. Like Rodriguez, Soriano worked his way up the bullpen ladder to become a closer; when he wasn't on the disabled list or back in the minors from 2002 through 2008, he was generally used in a supporting role for the Mariners and Braves, tallying just 16 saves in 201 appearances during that span.

Some may take Soriano's 5.40 ERA in 15 innings this year as evidence supporting Boras' theory, but that's a ridiculously small sample size to cite, and it isn't clear the terminally fragile Soriano was ever fully healthy when he was active. In fact, a lot of the closer-to-setup-man moves have something to do with health; take the path of Kerry Wood, who battled injuries as closer for the Indians but pitched quite well for the Yankees after being acquired last summer, never once complaining about his role. Take J.J. Putz, a teammate of Soriano in Seattle, and of Rodriguez in Queens. After saving 40 games and posting a 1.38 ERA for the Mariners in 2007, Putz served two stints on the DL while saving just 15 games in 2008. Traded to the Mets the following winter, he set up for K-Rod before going under the knife to have a bone spur removed, and suffered a UCL sprain while rehabbing, shelving him for the year. Lo and behold, he resurfaced as a top-flight setup man without complaint for the White Sox in 2010 (59 games, 2.83 ERA, three saves), and returned to closing upon being signed by the Diamondbacks this past winter.

Take Brian Fuentes, who after being displaced by Manny Corpas as closer of the 2007 Rockies during a DL stint was lights out down the stretch; alas, he didn't fare as well during that postseason, and earlier this year forgot the underlying lesson — they're just outs — when he called out A's manager Bob Geren after being used in non-save situations. Take Hall of Famer Goose Gossage, who in the autumn of his illustrious career pitched in front of fellow Hall of Famer Dennis Eckersley in Oakland. The idea that a closer can't pitch well in a setup role is utter nonsense.

Rodriguez, to his credit, was actually smart enough not to squawk when considering the possibility of setting up for either the Yankees or the Rays, and while the Brewers don't carry quite the same cachet, the guess here is that he'll be just fine supporting Axford in Milwaukee. Likewise, even if the Yankees do swing a deal for somebody like Heath Bell — I'm not saying they should, mind you, and I suspect his price tag in prospects will be more than the Yankees are willing to pay — there's no reason to worry that he won't fit into a setup role in front of Mariano Rivera. There's also no reason not to give some of the team's in-house options a chance, looking for the next David Robertson, but that's a rant for another day.