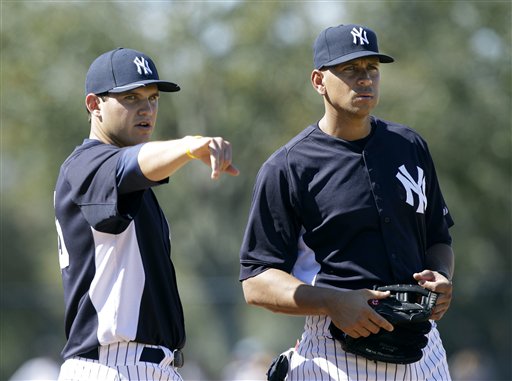 Brandon Laird doesn't measure up to Alex Rodriguez, but neither does anyone else. (AP)

It's not often that a major injury to one of a team's best players is treated as an afterthought, but given what an otherwise thrilling three days the Yankees had over the weekend, courtesy of Derek Jeter, CC Sabathia, and Robinson Cano, Alex Rodriguez's torn meniscus has yet to really be the lead story in the Bronx. That should change starting today.

After getting a second opinion on his right knee, Rodriguez had surgery on Monday to repair his meniscus and is now expected to miss four to six weeks. As Jay pointed out on Monday, that is a slightly longer than normal recovery period for what is a fairly common surgery, the extra time owing to the severity of the tear and concerns about Rodriguez re-injuring his hip by favoring the knee. Six weeks is roughly a quarter of the season, or half of what remains. If Alex is indeed out that long, the Yankees won't have him in the lineup again until mid-August.

That is a major loss. Though Rodriguez ranks fourth on the Yankees in both home runs and RBIs (behind Curtis Granderson, Mark Teixeira, and Robinson Cano in both categories), he is just one point behind the team leader in both batting average (Cano leads) and on-base percentage (Nick Swisher leads), both of which, along with an adjustment to the standards of their respective positions, have made him more valuable at the plate than Teixeira this season according to VORP. Also, according to range-based fielding metrics (specifically Ultimate Zone Rating and Baseball Prospectus's Fielding Runs), Rodriguez was the best defensive third baseman in the game in the first half (not counting Cleveland's Jack Hannahan, who was bounced to the bench by rookie Lonnie Chisenhall). That last seems likely to have been something of small-sample-based exaggeration, though Rodriguez has indeed looked much better in the field after being clearly limited by his hip over the last two seasons.

Put all of that together, and Rodriguez has been the eighth-best position player the American League according to Baseball Prospectus's WARP (Wins Above Replacement Player), or seventh-best according to FanGraphs' UZR-based WAR. That player is not easily replaced, particularly when one considers that third base has been the weakest-hitting position in baseball this season, even with Rodriguez included in the splits:

Trading for a short-term injury replacement is a bad idea in general, but given how difficult it has been for the rest of the league to find production at the hot corner this season, it's borderline pointless in this case.

Indeed, the Yankees intention seems to be to soldier on with Eduardo Nuñez at third base. That's a defensible decision given that Nuñez's career major league line of .279/.319/.413 is superior to what the average major league third baseman has done this season, and the team just went 14-3 with Nuñez starting at shortstop in place of an injured Jeter. Of course, the obvious fault in that logic is that, in Jeter, Nuñez was replacing a player who wasn't much better than average for his position in the first place, whereas, in Rodriguez, Nuñez is replacing arguably the most valuable third baseman in baseball. The Yankees didn't suffer from having Nuñez replace Jeter, because there was ultimately little difference between the two. However, there isn't a player in baseball who could sufficiently replace Rodriguez right now.

To their credit, the Yankees attempted to prepare for a situation like this. Signing former Gold Glove third baseman Eric Chavez briefly looked like a master stroke. Coming off the bench in April, Chavez was productive for the first time in more than half a decade until his body quit on him again while he was legging out a triple on May 5. Sadly validating my initial cynicism, Chavez's recovery from a fractured left foot has been plagued by unrelated set-backs including a back strain and, most recently, a possible abdominal injury, making it unlikely that he'll rejoin the team before Rodriguez or, really, at all.

The Yankees also hoped corner infield prospect Brandon Laird would build on what seemed like a breakout 2010 campaign to provide additional depth at all four corners, but a poor performance in Spring Training and an awful April seemed to avert their gaze. However, given the spot the Yankees find themselves in, I think Laird deserves another look.

I'm not about to argue that the Yankees should make Laird their starting third baseman tomorrow, but since the end of April, he has hit .294/.322/.456, he has four home runs in 11 games in July, and since the end of May has out-homered Jorge Vazquez (who can also play a little third base but had an awful June) 8 to 3. Laird won't take a walk, and he's no great shakes in the field, but he hit .291/.355/.523 with 23 home runs in 107 games last year for Double-A Trenton, a team that plays in a very pitching-friendly ballpark, and he has hit .300/.337/.525 against lefties this season, April included. That last might be redundant given that Nuñez, also a right-handed hitter, has hit .292/.320/.563 against major league lefties this season, but at least Laird would give the Yankees an option should Nuñez struggle at the plate or in the field.

There's certainly more up-side to using Laird to fill Rodriguez's roster spot than there is to using that spot to let Chris Dickerson or another fifth outfielder rot on the bench, though Dickerson has performed well in his limited opportunities. Also, the 23-year-old Laird clearly has more up-side than a warmed-over minor league veteran like 32-year-old ex-Twin Terry Tiffee, a switch-hitting corner infielder and career .226/.276/.350 hitter in the majors, or 35-year-old Mike Lamb, who was ironically among those in the running for the Yankees' third base job before the Yankees traded for Rodriguez early in spring training in 2004, both of whom the Yankees signed to minor league deals just three weeks ago. Fortunately, Tiffee hasn't played an inning at third base thus far this season, and Lamb has hit just .255/.286/.489 in 11 games for Scranton and .228/.269/.312 in just 131 major league games since 2008, so the Yankees likely won't be in a rush to clear space on the 40-man roster for either man.

Laird, meanwhile, is already on the 40-man roster, so he can be called up to fill Rodriguez's spot on the 25-man without complication, which is exactly what I think they should do. Bring Laird up and let him split time with Nuñez in the hope that one of them starts to get hot, at which point the team can try to ride that player for something like what they got out of Shelley Duncan in 2007 (which is what keeps popping into my head when I think of Laird). It can't hurt. The best-case scenario is that Laird rakes in Rodriguez's absence, then sticks on the roster as a power-hitting four-corner sub after Alex's return. The worst-case scenario is that he plays himself back to Triple-A in short order, leaving the Yankees right back where they are now.