Share All sharing options for: Still Coming Up Big 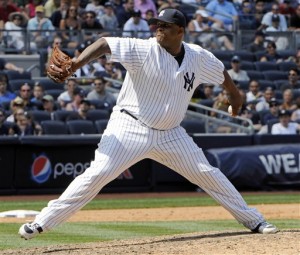 CC Sabathia may have thrown his best start of the season on Sunday. (AP)

I didn't get a chance to write about it amid all of the Jeter and A-Rod coverage, but how about that CC Sabathia? His four-hit complete-game shutout of the Rays on Sunday — capped emphatically by a game-ending strikeout of Elliot Johnson on a 98 MPH heater – ended the Yankees' first half on a high note and extended his scoreless streak to a career-high 23.2 innings. It was the big man's first full-service whitewashing since May 8, 2009 against the Orioles, and just the Yankees' third complete game of the season.

Sabathia leads the American League with 13 wins, but that's a byproduct of receiving a league-best 6.9 runs per game of offensive support; he's been in the top five in that department in each of his three seasons with the Yankees, never falling below 5.9 runs per game, an absurd rate. He's occupying plenty of space on the AL leaderboard in other categories as well, ranking second in innings (145.2), fourth in innings per start (7.3), eighth in ERA at 2.72, 10th in strikeout rate at 7.8 per nine, second in home runs per nine (a fluky career-best 0.3), and seventh in strikeout-to-walk ratio (3.6). All of those rate stats are his best since signing with the Yankees, if not quite up to the standard of his 2007-2008 peak, when he won the AL Cy Young award and then reeled off the most dominant stretch of his career after being traded to the Brewers in the middle of the following season.

That said, Sabathia hasn't dominated on every front. Until his last four starts — a span during which he has allowed just one run in 31.2 innings while compiling an astounding 42/6 K/BB ratio — his strikeout rate was a pedestrian 6.6 per nine. His .303 BABIP, while not his fault, is 14 points above the league average. His quality start rate of 60 percent is nothing special, five percentage points above average, tied for 28th in the league, well behind the small handful of starters who can claim to be having better seasons, such as Justin Verlander (95 percent), Jered Weaver (89 percent), James Shields and Dan Haren (84 percent apiece), Josh Beckett (71 percent). He has given up four or more runs in seven of his 20 starts, but what's amazing is that he's hung tough in each of them, averaging 7.1 innings per start even in those games, and helping the Yankees go 4-3 in those games even when he has had far from his best stuff. He doesn't have a single disaster start (more runs than innings pitched) to his name, unlike all of the aforementioned save for Verlander and Beckett. He won't win the Cy Young award so long as his ERA is so much higher than that of Weaver (1.86) or Verlander (2.15), but he nonetheless ranks third in pitcher WARP behind that duo:

Now in the third season of his seven-year, $161 million deal, Sabathia has given the Yankees a solid return on their investment, particularly when you consider the yeoman's work he did in the 2009 postseason. There's a growing consensus that he will exercise the opt-out clause in his contract at the end of this season, though his most recent comments on the topic — or more accurately, on the topic of living in the New York area — don't sound like anything more than a variant of the tune he whistled this past winter, when he said that he didn't plan to opt out.

Even if Sabathia does opt out, the chances appear to be very high that he would would re-sign with the Yankees at a higher annual value. There's no Cliff Lee on this year's free agent market, and even the vaguely appealing targets to be had — Chris Carpenter, Hiroki Kuroda and C.J. Wilson come to mind — are of the shorter term or lower dollar variety. There's no way that the homegrown likes of Dellin Betances and Manny Banuelos will be ready to fill Sabathia's big shoes, particularly not when Phil Hughes and A.J. Burnett rank as the most senior holdovers, and who knows what next month holds for the rebuilt Bartolo Colon and Freddy Garcia, let alone next year? The bottom line is that there's no reason for the Yankees not to spend what it takes to keep him, and no place else he's likely to get more money per year. Barring a stated desire to return to the West Coast after opting out — and let's note that the Angels don't seem to be in the mood to pay top dollar these days, to say nothing of the A's, Padres, and Dodgers, while the Giants are still dealing with the burden of Barry Zito's contract — Sabathia is extremely likely to be on hand for 2012 and beyond. It just may cost them a few dollars more.