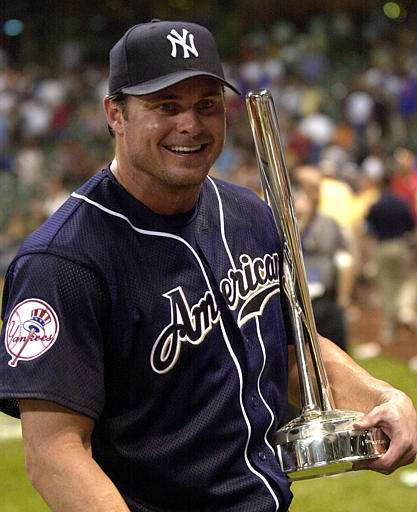 Jason Giambi's swing was unaffected by his Home Run Derby win in 2002. (AP)

The 28th annual Home Run Derby will air tonight at 8pm on ESPN. Among the eight contestants, four from each league, is Robinson Cano, who will be just the fourth Yankee ever to participate in the contest.

As an organization, the Yankees don't much care to see their players expending effort on the field for a cause other than another Yankee championship, and given the likely false belief that participation in the Home Run Derby can foul up a players swing, having their hitters participate ranks just below allowing their pitchers to play in the World Baseball Classic on the team's list of favorite things. I rank the derby second on that list because the Yankees do seem more willing to evaluate derby participation on a case-by-case basis.

Preceding Cano into the derby were Tino Martinez, who won the 1997 derby at Cleveland's Jacobs Field; and Jason Giambi, who had participated in the derby as an Athletic in 2001, won it as a Yankee in 2002 at Milwaukee's Miller Park, then hit the second most bombs in 2003 at Chicago's U.S. Cellular Field. Since then, the only Yankee participant has been Nick Swisher, who didn't make it out of the first round in Anaheim last year.

As for Cano, his home run rate has been very consistent over the last three seasons hovering in the general vicinity of one tater every 25 plate appearances. That provides a solid baseline against which the Yankees can later determine whether or not participation in the derby effected his power output in the second half. Certainly, one couldn't use regression to the mean as an excuse if Cano sees his power drop over the remainder of the season.

As for Martinez, Giambi, and Swisher, none of whom made this list, here are their pre- and post-derby home run rates from their derby seasons:

The average post-derby change in home run rate from those four seasons was less than one plate appearance per home run.