Share All sharing options for: Jeter's Ball and Lee's Downfall 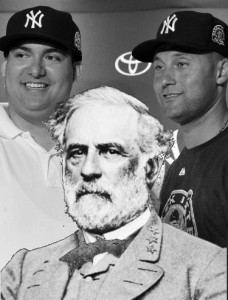 A pal of mine opined to me that the fellow who turned over Derek Jeter’s 3000-ball gratis is "an idiot." His reasoning was simple: unless the guy is rich, he could have literally dined out on that ball for awhile. The reward for being selfish far outweighed the reward for being selfless—although the Yankees did give him quite the bounty of thank yous. Still, my pal isn’t wholly wrong. In these tough economic times, if providence drops a $250,000 ball in your lap, you should probably take advantage of it.

It seems to me, though, that the guy didn’t really have any choice, even if he wasn’t inclined to be generous. Jeter is, to paraphrase John Lennon, more popular than the Beatles, at least in the Tri-State area. You don’t want to be known as the local Steve Bartman equivalent because you tried to extort the local demigod. You have to be able to live in your own community.

In this, I was reminded of a biography of Robert E. Lee I read recently. In it, the author speculates on Lee’s decision to follow Virginia out of the United States despite his own ambivalence towards secession and slavery:

Had Lee chosen to remain in the United States Army or had he resigned and only raised corn while other men fought and died, he would have elected infamy. He would have had to spend the rest of his life explaining his actions to deaf ears. And not the least of a legion of accusers would have been his own wife, who became a fiercely partisan Confederate. Robert Lee would have been most in danger in his own bed. In a real sense, Lee went to war in order to avoid conflict.

Lee left home so he could eventually go home. I assume Jeter got his ball out of a more magnanimous impulse, but if you think about it, there really wasn’t much of a choice to be made.