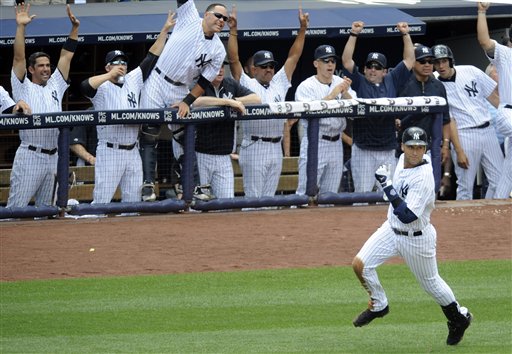 After sitting in the Yankee Stadium press box for Thursday night's contest, I was supposed to be in the cheap seats for Friday as Derek Jeter continued his pursuit of 3,000 hits. The rain scuttled those plans, so I was back in a very packed press box on Saturday, and had the honor of covering a magical afternoon, as Jeter not only reached the milestone — with a home run no less — but blew past it with a 5-for-5 day that included the game-winning hit. As I said last week, Jeter's pursuit wasn't simply about The Shape of Derek Jeter circa 2011; I remarked several times on the afternoon that it was as though he were channeling the 1999 version of himself, or else replaced by a newfangled Jeterbot 3000. Anyway, my article is free at Baseball Prospectus:

"I don't believe what I just saw," tweeted the New York Times' Tyler Kepner, echoing the legendary Jack Buck's call of Kirk Gibson's 1988 World Series home run. Yours truly came up with something considerably less printable, though hardly out of character; what can I say, other than that I was staying within myself and trying not to do to much? Having watched hundreds of those hits in person from the stands as a fan — to say nothing of the thousands I have watched on television — it was nonetheless not all that difficult to substitute my clap-clap-clap for the press box-approved tap-tap-tap on my laptop, as this ain't my first rodeo. I will concede to silently getting a little verklempt while smiling throughout the on-field celebration, when the Yankee dugout and bullpen emptied to congratulate Jeter, holding up play for several minutes; Jorge Posada greeed him at home plate with a bear hug, and every other player, coach and member of the support staff within the vicinity hugged him as well. Then it was back to work for all of us.

In clearing the wall, Jeter joined celebrated slugger (and former teammate and noted equestrian) Wade Boggs as just the second player to reach 3,000 via the longball. As noted previously, he became the 28th player to reach the 3,000 hit plateau, the 11th to do so with a single team, and the second to do so while still playing shortstop; Honus Wagner was the first, while Robin Yount and Cal Ripken Jr. had moved to other positions by the time they reached 3,000. Just 13 days past his 37th birthday, he became the fourth-youngest player ever to join the club, behind Ty Cobb, Hank Aaron, and Yount, and just ahead of Pete Rose. His career most certainly didn't need this embellishment to qualify as Cooperstown-worthy, but there he is, hanging with the immortals.

It is fitting that Jeter became the first Yankee to reach 3,000 hits. Babe Ruth, Lou Gehrig, and Mickey Mantle have the home runs, Joe DiMaggio the 56-game hitting streak, Yogi Berra the three MVP awards, the record of 10 World Series rings, and of course the quotes. Whether by numbers or by legend, Jeter doesn't quite match up with those guys. His spot on the pinstriped equivalent of Mount Rushmore is marked by the day-in, day-out persistence it takes to achieve such a number.

...For all of Jeter's efforts, the game was not won yet, and it fell to Mariano Rivera to close it out. While normally having the greatest closer of all time would count as money in the bank, the 41-year-old Rivera hadn't pitched since last Sunday, when he blew a save against the Mets and then remained sidelined by a sore triceps that led him to withdraw from the AL All-Star roster. Despite any anxieties about his fitness, Rivera struck out Sean Rodriguez looking, then used 400-some feet of center field real estate and the nimble legs of Granderson to retire Kelly Shoppach on a long flyball. Finally, he induced a routine grounder to Nunez to seal the victory, thus placing a bow on Jeter's extraordinary afternoon.

The venerable closer was certainly aware of what was at stake, knowing that another failure would dim the luster of a memorable afternoon for a player who has always emphasized team goals ahead of personal ones. "I don't want to tell you what was going through my mind," said Rivera after the game. "[This was] the first time that I pitched after Sunday when I got a little sore. Being in this situation, well, it put a little bit more pressure, a little bit more."

Jeter, of course, concurred. "It would have been really, really awkward to be out there doing interviews and waving to the crowd if we would have lost, so that was going through my head in my last at-bat there. After I hit the home run, I really tried not to think about 3,000 hits anymore and tried to focus on how we can win this game. If we didn't win, it would have definitely put a damper on things."

I was the one who asked that question of Rivera in the extended postgame press conference. It drew a smile from the closer while cracking up the room a bit, which I don't mind admitting was kind of cool. Anyway, the whole thing was a thrill to see up close, and what I lost in my ability to join the extended ovation as a fan, I gained in exposure to the inner workings of an unprecedented moment in the history of a franchise that has had some real doozies.

Elsewhere at Baseball Prospectus, I have another piece with some Yankee flavor, examining the strange turns of events in the paths of two players who have been inextricably linked since 2004, David Ortiz and Alex Rodriguez. The stuff on Ortiz pertains to his part in a Friday night brawl with the Orioles' Kevin Gregg, and harkens back to his bat flip controversy and subsequent retaliatory plunking by CC Sabathia while the Yankees were otherwise getting swept in the Bronx a month ago, while the stuff on Rodriguez clarifies the complaints I voiced here on Friday.

In the piece, I also quickly summarize the Yankees' options to replace Rodriguez, who will be lost for four to six weeks due to arthroscopic knee surgery to repair a torn meniscus in his right knee. The Yankees announced the tear on Saturday morning, and while the news was temporarily overshadowed by Jeter's moment, the reckoning came with Sunday's confirmation that he would indeed go under the knife.

The Yankees figure to have their hands full filling in for Rodriguez. Eric Chavez, who played well as a backup corner infielder early in the year, is on the disabled list due to a broken foot; he was nearing a rehab assignment, but lately he has been dealing with back issues and may not return at all. [Eduardo] Nunez, who outhit Jeter during the latter's stint on the DL, is no threat to do the same to Rodriguez; he's batting .277/.317/.437, and there's some question as to whether he can retain the power he's shown. Pena (.241/.274/.299) is replacement-level dreck even as a middle infielder. Triple-A third baseman Brandon Laird is hitting just .272/.300/.423 at Scranton/Wilkes-Barre. Available trade targets like Aramis Ramirez (whose $16 million option is exercised if he is traded), Casey Blake (now on his third DL stint of the season), and Kevin Kouzmanoff (who is terrible at baseball) create more problems than they solve, while just-released free agent Melvin Mora appears to be suffering from bat death. In the face of such options, Nunez starts to look better and better.

Initially, I wasn't quite sure why the Yankees announced that Rodriguez would be lost for as long as six weeks given that players have returned from such surgery — the ol' scrape-and-tape — in not much longer than three weeks; the similarly aged Chipper Jones is undergoing the same procedure and is expected to miss only two to three weeks. As you'd suspect, it's not just the management of expectations for a 35-year-old athlete, it has something to do with the severity of the tear and the risk that a small change in his gait could exacerbate his hip woes. The Yankees are likely to be extra-cautious about a player whom they have signed through the end of time, so it will be interesting to see whether they make a move to beef up their available options.