Standing On The Verge Of Getting It On

Share All sharing options for: Standing On The Verge Of Getting It On 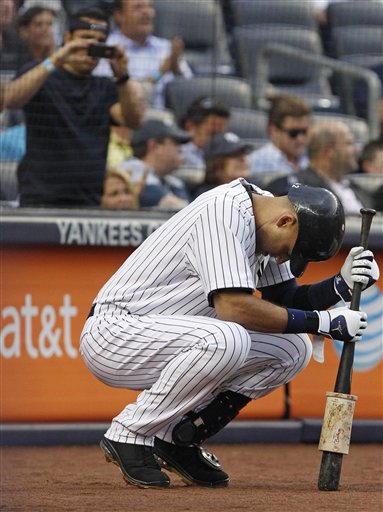 With Friday night's rainout, Derek Jeter now has two home games in which to get hits number 2,999 and 3,000 before the Yankees depart the Bronx for the All-Star break and an eight-game road trip. I think he'll get them, but with David Price and James Shields set to start for the Rays, it will be no easy task, even if Jeter has hit Shields well in the past.

I have a couple of items that look back on Jeter's first 2,998 hits over at SI.com. The first breaks down his hits by the numbers. The second is a photo gallery that I chose (the hits, not the actual photos) and captioned that looks back at 11 of his most memorable hits (and 3,000 will make it an even dozen), though not all of those counted toward that magic number.

Additionally, please take the time to check out the excellent "Jeteronomy" series over at my old home, Bronx Banter, as Alex Belth and his crew have taken turns reflecting on Jeter's career and his milestone. And don't miss the outstanding Joe Posnanski and Doug Glanville pieces Jay linked to below.