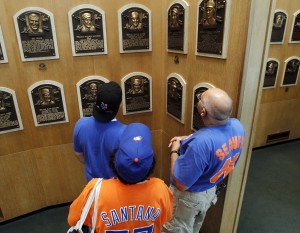 Next up for Derek Jeter--taunting jealous Mets fans from the gallery wall in Cooperstown. (AP)

It is perhaps premature to issue our congratulations to Derek Jeter given that the game is still ongoing, and he may yet expand upon his current 5-for-5 to go 6-for-6 or 28-for-28. Not only has he finally achieved the hit total in which so much significance has been invested, but he did it in such style that one could at least momentarily forget what a slog the last year and a half has been. Here is Elvis's '68 comeback special, and what an exhilarating thing it is to see.

The actual hit total is meaningless. It's a measure of longevity more than it is quality--some of the greatest hitters of all time don't have 3,000 hits. That Babe Ruth and Mickey Mantle didn't get there is no comment on the potency of their bats. Yet, there is also something special about a player who is both very good and very there, by which I mean "present." Jeter has a lot in common with Lou Gehrig that way. But for a fluke play in Toronto and the recent encroachment of age, he has been there for 15 years, knocking out his 200 hits a year.

In the time that I've been writing the Pinstriped Bible, the Cult of Jeter has been so prevalent, greater than any kind of approbation that met Don Mattingly, the Yankees hero of my youth, that the obligation was to push back against a fanaticism that seemed to claim that the man had no flaws. Those zombies did far more damage to their hero over the years than any critic. A more measured and realistic appreciation would have provoked less of a backlash. Instead of hearing about the wonderful things that Jeter did on the field, we heard as much about his frequently stiff defense. I have sometimes leaned too far in that direction, but then, Jeter-worship is a test for any iconoclast, or even just a writer and baseball fan who recognizes that fallible humans are more appropriately rooted for than gods--a human being proves something every time he steps on the field of competition and succeeds. A god is perfection personified and by definition cannot surprise us or be applauded for succeeding in accordance with his gifts. If any player can do no wrong, then you can't properly appreciate what he does right.

Jeter is emphatically not a god. He's just a baseball player, a very good one with some flaws, one who seems more committed than most. He would have gone down in history even had he not reached 3,000 hits (again: in tremendous style). That he got there is just the final touch on a career that will conclude in a rendezvous at Cooperstown. Hats off to the greatest shortstop in the history of the New York Yankees.