The Difference Between the Yankees and the Angels

Share All sharing options for: The Difference Between the Yankees and the Angels

I thought this was a belated April Fool's story when I saw it:

In the manager’s office after Thursday’s game, Angels manager Mike Scioscia and GM Tony Reagins discussed their options for nearly 30 minutes after center fielder Peter Bourjos injured his hamstring in the eighth inning.

The result of those deliberations — top prospect Mike Trout will be promoted from Double-A Arkansas in time for Friday’s game against the Mariners. 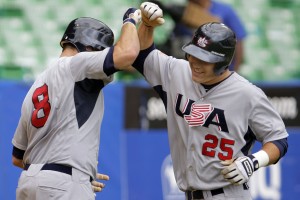 Angels super-prospect Mike Trout forearm-bashing Mike Moustakas, another recently-promoted prospect the Yankees would have hesitated to call up. (AP)

Trout, for those that only follow the Yankees, the whole Yankees, and nothing but the Yankees, is probably the best prospect in baseball. It's him or Bryce Harper, and you can find knowledgeable people on both sides of that argument. The speedy center fielder, who hails from an obscure corner of my home state, hit .341/.428/.490 last year and is hitting .330/.422/.544 this year at Double-A Arkansas. He's only 19 and those numbers were compiled in some good California and Texas League environments, so there is likely to be some severe degradation, but credit the Angels for the aggressive promotion.

The words "Yankees" and "aggressive promotion" are never actually heard in the same sentence. It's nothing new--when they acquired the rights to Joe DiMaggio after the 1934 season, the deal actually stipulated that they got to leave him in San Francisco for another year, his third in the highly competitive Pacific Coast League. You can be certain that if the Yankees had a Trout (to be fair, the kind of guy that they usually don't draft (or choose not to--I'm still frustrated that Nick Castellanos was on the board when they selected Cito Culver) he would still be at Trenton. Heck, Derek Jeter was very nearly the greatest player in the history of the Columbus Clippers--it took Tony Fernandez's injury and some nose-holding behavior on the part of Joe Torre and George Steinbrenner's advisers to avoid an alternate universe in which the Yankees traded for someone like the then-33-year-old Shawon Dunston to be the Opening Day shortstop in 1996.

With Jesus Montero on the disabled list, the Yankees don't have a Trout equivalent just now, although the pitching department can sure as heck furnish up some hurlers who could out-pitch any Tom, Dick, or Brian Gordon should the need arise, not to mention the immortal Sergio Mitre. There is also the question of why Austin Romine is stuck in Trenton, hitting quite well, while Montero stagnates and Russell Martin (.182/.295/.284 May 1 to present) handicaps the major-league offense, whatever his value to the pitching staff.

In the end, if the Yankees determine they need the help behind the dish or on the mound, they will drag in a reliever from the Washington Nationals or a catcher from the Cincinnati Reds. Get stuffed, Dellin Betances! Don't you know that Luke Hochevar is a Proven Veteran?

In a recent piece for ESPN, my BP colleague Kevin Goldstein quoted a major-league executive: "They just don't seem to trust their young players. Look at what the Braves did. When they needed a warm body, they had no issue with calling on [Julio] Teheran or [Randall] Delgado, even though those guys weren't fully big league-ready."

To what the Braves did, you can add what the Angels just did. Sometimes you gamble and you fail, but other times you win and you get better, and you don't have to trade Doug Drabek to get there. The Yankees are so conservative they make Glenn Beck look like Keith Olbermann. There is nothing inherently wrong with a cautious approach, but the Yankees can turn the art of self-denial into the practice of self-defeat--not to mention robbing their fans of the chance to root for home-grown stars.

Derek Jeter is about to get 3,000 hits. The meaning is probably lost on the Yankees: he's there because in the end they didn't send him out for more, didn't trade for Royce Clayton, didn't worry about his being too young or too scared or too anything to face the tense Big Apple. They took a leap of faith and were rewarded. With Jeter on his way out, it might be time to do it again, or else he will have no successor.

Blast it guys, stop going out: it's time to eat at home. Bravo, Angels. Now, Yankees brass, give us the chance to cheer your boldness in the same way.